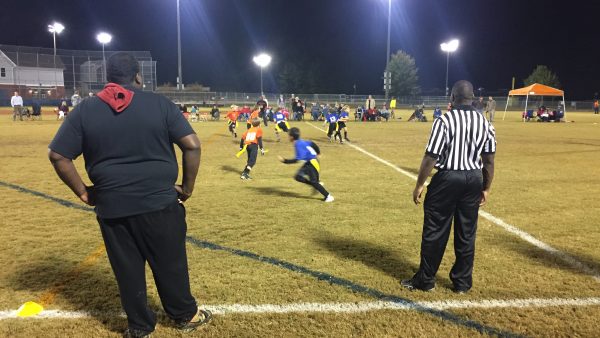 Young speedsters take advantage of the open field behind Spain Park High School in Hoover. Teams of five face off on a 70-by-30-yard playing area.

As links between head impacts and neurological problems become clearer, an alternative to youth tackle football is surging. Flag football is more and more popular, even as participation in other sports declines, and even in places with strong youth tackle traditions.

People in Hoover love football. Hoover High School’s program was made famous a decade ago on the MTV show “Two-a-Days” — an intense show about an intense sport. But given recent research linking head trauma to brain diseases and behavior problems, even in Hoover, some parents are having second thoughts.

In flag football, players stop opponents by yanking flags off their waists instead of tackling them. McClure sees benefits.

“I don’t think their necks are ready for all that contact,” he says. “And we saw a little kid’s leg get broken last week in tackle football … And of course, they can probably hurt something out here [playing flag], but I think it’s just a little safer.”

“I want to play tackle when I get older, but not right now,” says Mason. “I don’t think I’m ready.”

The NFL is promoting flag football as another way to develop athletes. Former star players including Terrell Owens and Michael Vick are starting a professional flag football league next year. And according to the Sports & Fitness Industry Association, over the past three years, fewer kids are playing basketball, soccer, baseball, and tackle football, while flag football participation has increased.

In Hoover, the youth rec program has been growing by roughly ten teams each year. Program officials attribute the growth mainly to fears of serious injury, including concussion, and to fewer practices per week than demanded by area tackle programs. There are now 78 teams, or roughly 600 kids. A dozen of those are girls. And Hoover and Vestavia Hills are hosting the Southeast Championship Youth Flag Football Five-on-Five Invitational tournament on November 18 and 19.

But there are old-school tackle devotees along the sidelines of the flag football games, too. On a recent night, Danny and Elizabeth Bischoff watch their eight-year-old son Walker play.

“I’m really just here so he can learn how to play football,” says Danny. “I would eventually like for him to move on to tackle … I love the sport, love the contact.”

Elizabeth, Walker, and Danny Bischoff. Walker plays on the same team as Mason McClure (above).

Walker is excited at the prospect, but Walker’s mom, Elizabeth, sees things differently.

“I would like to see just the running and playing, pulling flags, and not tackle, even … ever, she says. “When you hear stories, any injury with your kid that could change his life doesn’t sit well.”

At the game, Robin Schultz of Hoover shoots photos of his grandson scoring his second touchdown of the evening. Schultz says he wants young Jackson to play tackle eventually, but was struggling with when. “There’s really no ‘right age’ to risk head injury,” he says.

Any sport where kids are running hard has its risks. But more young players in Hoover and across the country are racing around on open fields, free from heavy hits or helmets. And learning the game without getting a concussion seems a little more likely.