Blazer Fans Eager for the Return of UAB Football 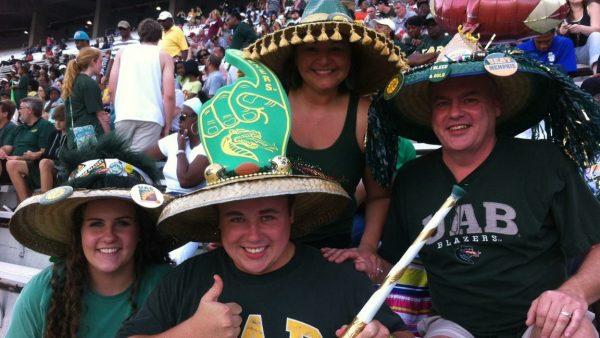 UAB senior Will Harris (center), along with his family, show off their homemade UAB sombreros.

Tracy Wayland says UAB green and gold is in her family’s blood. Her late husband worked at UAB and graduated from the school. And her children went there. She, like many other fans, cannot wait for UAB Football’s first game Saturday, two years after university leaders reinstated the program.

Wayland is hoping her two-year-old grandson will handle the festivities okay. But more than that, she says reviving the football team is about UAB getting back to the line with other universities. “I’m looking forward to seeing the experience that we have at other schools,” says Wayland. “That’s what the students deserve.”

UAB senior Will Harris is pumped. He’s been going to UAB Football home and away games with his family since he was a child. And when they go to games, they go all out. “We all made these specialized sombreros,” says Harris. “One of them had these little UAB mini-helmets on it. One of them had tassels hanging from it. One of them had fan shakers on it.”

Harris says he’ll have butterflies in his stomach on Saturday waiting for that afternoon kick off. “That first walk through when I go through the gates and I see that stadium, it’s gonna be…it’s gonna be some tears,” says Harris. “It’s gonna be hard.” It’s emotional, he says, because it represents a lot of hard work on the part of students, players and the community to bring the team back.

It’s a similar feeling for UAB alumnus Jess Taylor. “There’s going to be a moment in that day where I have to stop and go, ‘It’s back. We’re here. Let’s do this,'” Taylor says.

Taylor describes himself as a crazy UAB fan. He says the excitement is tempered just a bit by the fact this team was shut down once before. He’s optimistic the Blazers are here to stay. “I think we have a football team for good,” Taylor says, “if we support it.”

He expects that first game against Alabama A & M will be electric. “I think they’re gonna come out and that first hit … we may have to stop for five minutes so the guy can get up,” Taylor says.

UAB senior Will Harris says he likes rooting for the underdog. It demands loyalty, not mere bandwagon fans. Harris is not dismissing those other college football teams in the state; it’s just that UAB is his team.

A young Will Harris stands alongside then-UAB player Paul Linksy at a fan event.