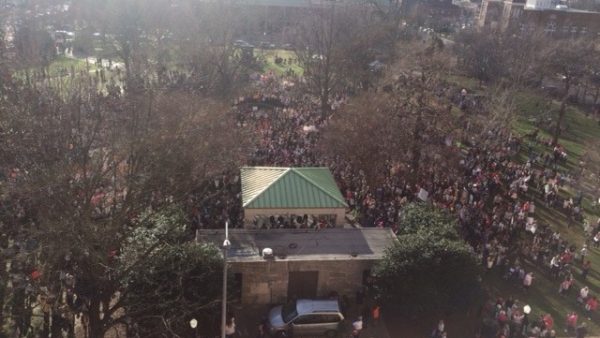 The view from above Kelly Ingram Park. Protestors gathered for the Birmingham women's march Saturday, part of a global movement to protest in support of women and minority rights.

CORRECTION: The original headline for the this story said “hundreds” were in attendance. Late reporting from the Birmingham Police Department estimates around 5,000 people joined the march.

Large crowds gathered Saturday at Kelly Ingram Park in Birmingham for the Women’s March. Women, men, children, and even their pets convened on the Civil Rights District to do what many who came before them had done, to protest injustice and inequality.

“I hope to get the attention of the people who are coming into power to understand that there are a lot of people out here who believe in equality, who believe in justice, who support immigrants, and they need to understand,” says Carol Dean of Hoover. “I don’t think they’ve heard those voices. And they need to see the people and hear the voices,” she says Dean marched with her husband, Joseph Dean.

Nilufar Tabari attended the Birmingham march rather than the one in Atlanta, Ga., where she lives. She says she hopes this movement will stimulate the masses and spur change from the bottom up.

Women’s Marches were held in cities in all 50 U.S. states and dozens of countries around the world, including England, Australia, Brazil and Kenya.

This is an art piece by Birmingham resident Ira Hill. People wrote their thoughts and feelings on this American flag and after the group marched around downtown, Hill invited demonstrators to paint over all the writing with pink paint. He says, “It’s the power of people working together to make change.” The idea was lost on some attendees at first and many thought Hill’s artwork was a counter protest. Hill assured them it was not.