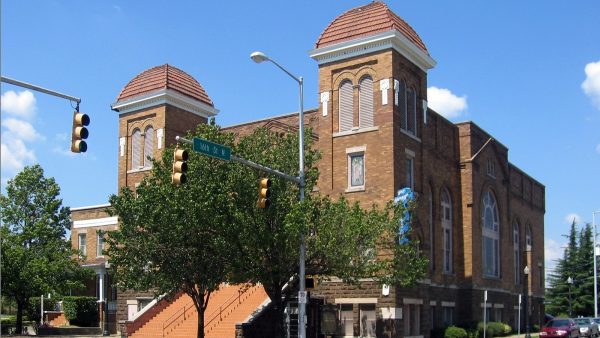 The 16th Street Baptist Church is part of the new Birmingham Civil Rights National Monument, designated by President Obama on Thursday. The new monument, one of three new ones honoring civil rights history, will tell the stories of nearby historically significant sites.

Birmingham city leaders announced Thursday evening that the Birmingham Civil Rights District, once a hub of violence and aggression toward African-Americans, is now a national monument. President Obama named it one of three new monuments Thursday, as part of his administration’s commitment to protecting culturally and historically significant places, according to the White House.

Mayor William Bell, joined by civil rights leaders, spoke Thursday at the 16th Street Baptist Church. The church was the site of a bombing in 1963 and will be part of the new monument. The monument will also highlight the significance of other nearby sites, such as Kelly Ingram Park, where Bull Connor, then Birmingham’s public safety commissioner, turned hoses and dogs on civil rights protesters.

The designation also will protect the historic A.G. Gaston Motel, which has fallen into disrepair after remaining vacant for more than two decades.

Earlier Thursday as he awaited final word from the White House, Bell said the designation would be especially meaningful to him. “Having grown up and lived all my life in this city, having been born into a segregated society and to see the changes that were made that would allow me to become the mayor of this great city, it would be beyond comprehension,” he said. “And for me to be the mayor at this particular time is almost overwhelming.”

Obama said in a statement Thursday the new national monuments preserve chapters of history. “They tell the important stories of the citizens who helped launch the civil rights movement in Birmingham and the Freedom Riders whose bravery raised national awareness of segregation and violence. These stories are part of our shared history,” Obama said.