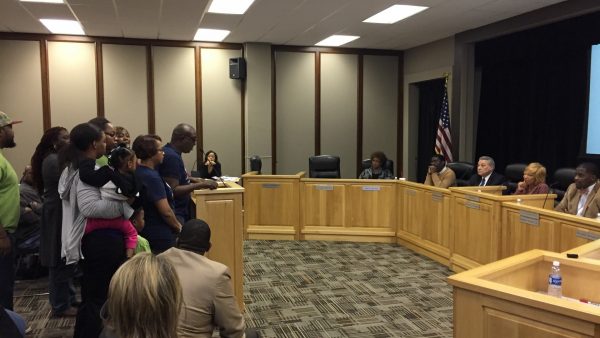 Supporters of iBestow Spanish Immersion Charter School make their case, unsuccessfully, to the Birmingham school board. The proposed charter would have opened this fall downtown. Former Birmingham City Council President Lee Loder Jr. and his wife, Adrianne Ragland Loder, founded Loder Ragland Ministries, which operates the current school and sought to expand through a charter.

After hearing hours of passionate appeals, the Birmingham school board on Tuesday night unanimously rejected what would have been the first charter schools to operate in the city. Most who spoke at the meeting supported the church-backed schools’ applications. The vote came during a special called meeting after a microcosm of the national debate over charter schools played out in the preceding work session.

Charters schools are public schools, but depending on the state, they are free from some of the staffing, pay, or facilities restrictions that traditional public schools have to follow. In 2015, the state legislature made Alabama the 43rd state to allow charter schools. But many rank-and-file educators and teachers unions don’t want them.

Richard Franklin, president of the Birmingham chapter of the American Federation of Teachers, says charter school advocates and others are part of a smear campaign against the city’s existing schools.

“We cannot believe the rhetoric about ‘failing schools,’” he said. “I want y’all to listen to me: We have to stop putting so much [blame] on the school system and put something on us as a community.”

Franklin and other charter opponents often criticize pro-charter lobbying and political contributions, which sometimes come from out of state. In Birmingham, however, there is grass-roots support for charters. Many pro-charter speakers were concerned with sub-par academics and discipline in Birmingham schools. Sharon Denson, who teaches in the system, spoke in support of STAR Academy becoming a charter.

“We are not interested in competition,” she said. “We are interested in being a complimentary model for Birmingham City Schools. Charter schools — they’re coming … so why not?”

STAR Academy already runs a kindergarten and pre-K in Eastlake but wants to expand. The other rejected applicant, iBestow school, proposed becoming a charter dual-language immersion program. That was a requirement originally set by the school system as part of their request for proposals. iBestow already serves preschool and K4 students.

STAR Academy and iBestow supporters say the Birmingham school board has been evasive when it comes to providing information that would’ve strengthened the applications and is simply blocking charter schools. Board members said they’re not against charter schools in general, but that these two applications didn’t meet legal requirements. A board-appointed review committee found fault with, among other things, budget projections, curriculum, and “vague” timelines. But both groups of applicants will likely appeal to the state charter school commission, which can overrule local boards.

Supporters of the iBestow charter school in front of the Birmingham school board, which is one of few local boards in the state that signed up to be charter “authorizers.” Though iBestow supporters and STAR Academy supporters were en masse, neither charter was not authorized.