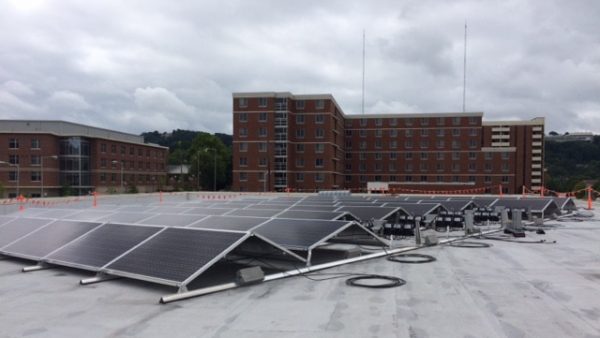 The new solar energy system on the roof of UAB's Campus Recreation Center. The system can be seen from adjacent buildings in every direction.

On a hot and cloudy day on the roof of UAB’s Campus Recreation Center, row upon row of solar panels are taking in the light. At just three stories, the roof and its new accessories can be seen from adjacent buildings in every direction.

“If you’re standing here and you look around 360 degrees people can see the system,” UAB’s sustainability coordinator, Julie Price, says that was intentional. “And I think that’s the first step to our mission as a sustainability program is public engagement.”

Rec Center patrons will also be able to see the system in action on a monitor inside the gym. But solar power does have some drawbacks. For example, it can take several years before UAB actually sees a return on its roughly $122,000 investment.

“Since we’re a tax-exempt institution, we can’t get the federal tax incentive, so our payback period is a little longer,” says Price. “Plus we have lower educational rates, which is beneficial for us but when you’re trying to pay back a system and you have inherently lower rates, that makes your payback a little bit longer.”

Closer view of the solar panels. These will produce roughly 10 percent of the Rec Center’s daily power usage.

The federal government does offer tax incentives to companies that install solar panels. This can make the payback time less than 10 years. But UAB is exempt, so their payback will be closer to 20 years. After that, Price says, the energy being produced by the system – roughly 10 percent of the Rec Center’s daily usage – will be free energy.

The project is part of a larger plan at UAB to use buildings as incubators for new sustainable technology, she adds.