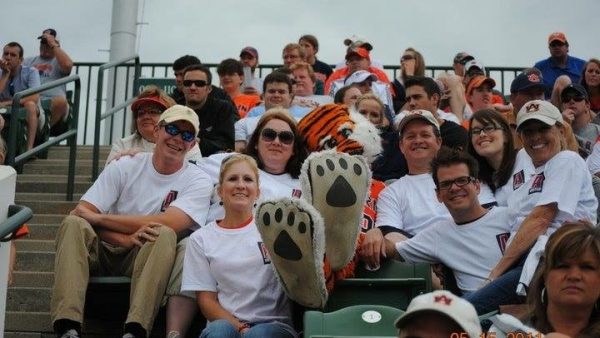 Members of Toomer’s for Tuscaloosa with the Auburn mascot, Aubie. Holly and Jimbo Shirley are sitting on the right and left next to Aubie.

One Alabama woman dove head first into the relief effort after the tornado outbreak in April 2011. Her group, Toomer’s for Tuscaloosa, took off overnight, organizing aid for displaced residents and other emergency responders. But while helping others pick up the pieces to their lives, her personal life was crumbling.

April 27, 2011, was Holly and Jimbo Shirley’s ninth wedding anniversary and it was going to be the last.

“Because I’d been to see an attorney,” Holly says. “I was making plans to get a divorce.”

This decision wasn’t made in haste. Holly says their troubles began after the recession in 2008. She owned an interior design business and Jimbo was a stockbroker. When the market crashed, they started having financial trouble. Holly was forced to close shop and Jimbo lost his job. After that, their relationship hit the rocks.

“There were good days and bad days,” Holly remembers. “There’s a part of you that knows, this is my best friend. This is the person I made this commitment to be on this journey with. Both of us were just mad at ourselves and we were taking it out on each other.”

They stayed together because, Holly says, it was cheaper than the alternative. In December 2010, Holly decided she’d had enough. But the divorce got put on hold when those tornadoes ripped through Alabama. From the basement in her Inverness home, Holly watched the news in complete awe.

“I liken it to what people in the 60s thought missile strikes would be like,” Holly says remembering feelings of anxiety and helplessness. “When you don’t know where it’s gonna hit next. And you’re in this bomb shelter, and you’re waiting. And it’s in the town next to you. When is it gonna hit my house?”

Trucks carrying loads of supplies for relief effort organized by Toomer’s for Tuscaloosa.

Time to do Something

She wanted to help, so she launched Toomer’s for Tuscaloosa. The name’s a symbolic laying down of arms that combines the popular Toomer’s Corner at Auburn University where she went to school and hard-hit Tuscaloosa, home to arch rival University of Alabama. Her relief efforts started immediately.

“I could not fathom that there were thousands of people that needed to be fed,” Holly recalls. “I was seeing it on the television, but it’s completely different than to be standing there in it and smelling the smells…Rotten garbage, rotten meat…Sheet rock dust, and everything was gray. And in the town of Cordova everything was gray. It sucked the grass up. There was nothing left there but a bank vault.”

The tornadoes hit on Wednesday. By Saturday, Toomer’s was organizing delivery of over a half-dozen semi trucks carrying everything from food to clothing to portable showers. Help poured in as Auburn and Alabama alums from all over the country joined in. She says they were, “the last group of people that you would ever imagine to handle a disaster, or do disaster relief. We were a starving artist from New York City, an interior designer whose business had closed, a girl who taught art, a mom blogger.” In other words, not one member of the group had any emergency management training. But, Holly says, they managed to organize an incredibly efficient and successful relief effort.

The support that Toomer’s received was awe-inspiring and Holly wanted to share that feeling. The person she wanted to share it with was her soon to be ex-husband Jimbo. She pleaded with him to come with her to Tuscaloosa. And he did. That sent the two in a new direction.

“Anytime you can take the focus off yourself, and put it on someone else and help others, you realize your problems are not as big as you thought they were,” Holly says. “And that’s what happened with him. His motivation for everything he did changed.”

There was no defining moment, Holly says. The two of them just knew. Helping other people pick up the pieces to their lives provided new perspective and soon after they realized they were going to be ok – together.

Toomer’s for Tuscaloosa helps in New York after Superstorm Sandy.

Toomer’s for Tuscaloosa went on to help after tornados in Joplin, Missouri, and Moore, Oklahoma and also Superstorm Sandy in New York City. The group slowed its active disaster response work two years ago. It had been running on an all-volunteer basis and they needed to get back to their regular lives.

Holly and Jimbo Shirley celebrate their 14th wedding anniversary on Wednesday, April 27, 2016. It’s a day that – without the tragedy in April 2011 – might never have happened.

Holly and Jimbo Shirley in January 2016.