The Rising Cost of Helping the Homeless in Alabama 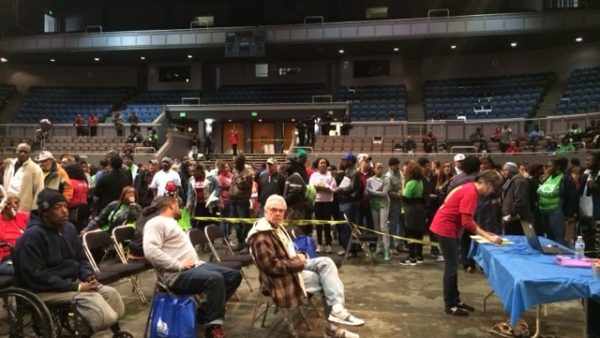 Dozens of people wait in line for state-issued IDs at Project Homeless Connect at Boutwell Auditorium in Birmingham.

Life is difficult without identification. For homeless people, not having it can make life even more challenging. There are organizations that help homeless people get state-issued IDs, but cost increases are hurting their efforts.

Hundreds pack into Boutwell Auditorium for Project Homeless Connect, an event that brings together several community organizations that provide free services to the needy. One of those people is 56-year-old Keith, who asked that we not use his last name.

“I’m trying to get state ID and get something for a cold. I’ve been down under the weather,” Keith says.

Keith has been homeless for about two years after spending nearly four decades in prison. He waits at Project Homeless Connect for a health screening and to see a doctor for help with a cold.

Keith’s been homeless for about two years after spending nearly four decades in prison. He says he’d been sick for about two weeks and he was at the event to see a doctor and to talk to someone about a dental problem.

“I’m trying to get some teeth! I ain’t got none,” he exclaims.

The group One Roof Birmingham offers services to homeless people like Keith. Right now they’re working on getting him a state ID. He’ll need one to receive other services like health and dental care. But getting identification isn’t always easy for homeless people.

They’re also trying to get Keith Social Security benefits, for which he’ll need both a state ID and Social Security card, Lewis says. But once Keith gets these, he’ll need to hold onto them. This can be challenging for people who don’t have permanent housing.

“Imagine living in abandoned houses and they’re burning down and your stuff is in there. Or you go to a shelter and you get kicked out and they throw all your stuff away. Or you lose your stuff,” Lewis says.

Social Security cards can be replaced for free. State IDs, however, can’t. One Roof helps clients by paying for new IDs, but covering that cost has become more difficult since the state raised the price to $36.25, a 54-percent jump in just one year.

Sergeant Steve Jarrett from the Alabama Law Enforcement Agency said in an email that the increase in the price of state issued ID was due to a deficit in the cost of producing them.

“For a number of years, each time a driver license or identification card was issued, the state lost approximately $19, which equated to $24 million per year.  Last year, under the direction of the first Secretary of Law Enforcement, Spencer Collier, the decision was made to re-coup a portion of the actual costs the state incurred to produce a driver license,” Jarrett said.

“Truly the price going up at the state level has impacted the number of clients that we can serve. We’ve had to turn people away,” says Michelle Farley, One Roof’s executive director. The number of people they can help with their $5,000 budget dropped from more than 200 before the price increase to less than 140 afterward. One Roof is also trying to help people hang on to their IDs, since there’s really no wiggle room in the budget for replacements, Farley says.

“We have, over the years, come up with creative ways to try to help them keep up with it,” Farley says. “A string around the neck, I don’t know.”

If One Roof wants to keep up with demand, they’re going to have to raise more money, Farley says.

As for Keith, he says the first thing he wants to eat when he gets new teeth is surf and turf.