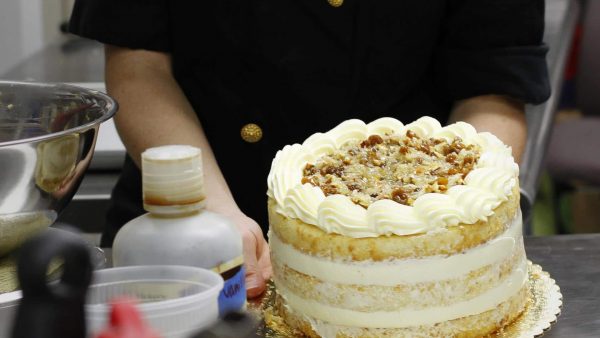 The deep south has seen a resurgence of interest in southern culture since author Harper Lee published her newest novel, “Go Set a Watchman.” The author previously wrote beloved classic “To Kill a Mockingbird,” so it’s no wonder her new book set off sparks of conversation about southern identity. Within that, however, there’s been speculation about the forgotten dessert mentioned in her first book: lane cake.

“To Kill a Mockingbird” and Lane Cake

The cake became a big part of Alabama identity after Harper Lee mentioned protagonist Scout eating it in “Mockingbird.” A neighbor baked it, and Scout said, “Miss Maudie Atkinson baked a Lane cake so loaded with shinny it made me tight.” The cake became a big holiday favorite, a bill even passed in the state legislature to make it Alabama’s official dessert. But since then, it seems to have been forgotten.

Lexi Ginsburg Mota owns The Cakerie, a local bakery. It’s one of the last bakeries in Birmingham that still makes the once-famous cake. Until someone custom-ordered a Lane cake from a bakery she used to work at, she was a stranger to the recipe.

“I’m from Alabama,” she says, “and I moved away and came back and I hadn’t heard of it either.”

Ginsburg Mota and fellow baker Anna Kelly usually bake wedding cakes, but squeeze in Lane cake orders whenever they can. Since the release of “Go Set a Watchman,” they’ve even gotten a few more Lane cake orders than usual.

Kelly and Ginsburg Mota need orders in advance because the cake takes around 6 hours to bake. The quickest part, Ginsburg Mota says, is the filling.

The buttercream takes so long because they make two different kinds– a special Cakerie twist.

“One is you put whites and sugar,” Ginsburg Mota says, “And the other one is a French buttercream, and we do yolks. But then we actually combine the two.”

But for the filling itself, the Cakerie bakers like to take it a more traditional route.

There isn’t much history available on Lane cake, but the original recipe is traced back to Emma Rylander Lane, who entered the cake in a baking competition in 1898. The cake won, and it soared in popularity.

There are many variations on the recipe, but most of them stay true to the filling, which Ginsburg Mota says is what makes the cake so unique anyway. It’s a combination of pecans, coconut, raisins, whiskey, sugar, eggs, and butter that goes between each layer of cake.

When every Lane cake is done and set out, Ginsburg Mota says the Cakerie has never heard any complaints. She says the biggest hope for Lane cake to gain popularity again is to continue to spread the word.

“We’ve never heard anybody say, ‘I don’t like this,'”she says, “There’s nothing not to like about it.”