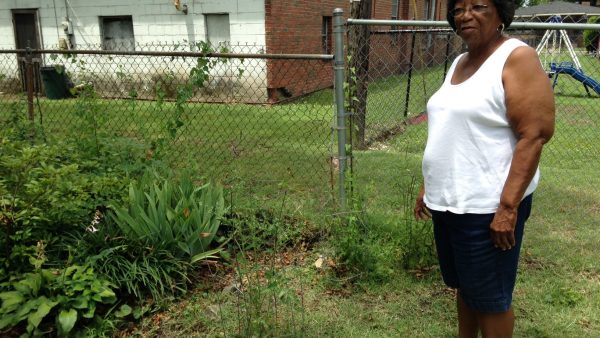 Vivian Starks in front of her backyard garden at her home in Birmingham's Collegeville neighborhood.

Vivian Starks, the president of Birmingham’s Collegeville neighborhood, loves being outside in her backyard. One of her favorite things to do there is work in her garden. She enjoys growing plants and raising tomatoes. She can only eat those tomatoes occasionally though because of the contamination in her neighborhood.

Neighborhoods in the city’s North Birmingham community have spent years dealing with soil contamination. North Birmingham, Collegeville, Fairmont, and Harriman contain properties with chemicals generated by factories in the surrounding area. The Environmental Protection Agency (EPA) has been working on clean up efforts in these neighborhoods since 2013. The agency recently awarded the city of Birmingham a $400,000 grant to test the soil at commercial properties and identify contaminated sites.

The EPA says the city can then go after a grant to clean up and redevelop those sites if possible.

This is on top of decontamination efforts of residential properties already underway. EPA coordinator Richard Jardine oversees that ongoing project. He says the EPA “…maybe have about two more years to go,” reporting they have tested 1,400 residential properties and have about 600 more to go. Jardine says it’s been a challenge to do the work because of “trying to get permission to go on the [vacant] properties.”

Starks says the neighborhood is improving but wonders how long it will take to complete the work. “I don’t know. I don’t even think they know,” she says.

As the EPA continues to clean up North Birmingham, area citizens continue to wait. Starks says it is normal to smell strange scents and see particles coming out of the sky in Collegeville. “All I want is good air, good soil, and good water that’s all,” she says.

She says no one in her neighborhood plants anymore. “Everybody in this area always had pecan trees, peach trees and you can’t go through this neighborhood and find a peach tree now or a good fruit tree,” says Starks, “so that right there is telling you something.”

She loves gardening and hopes that her neighborhood can be the way that it used to be.