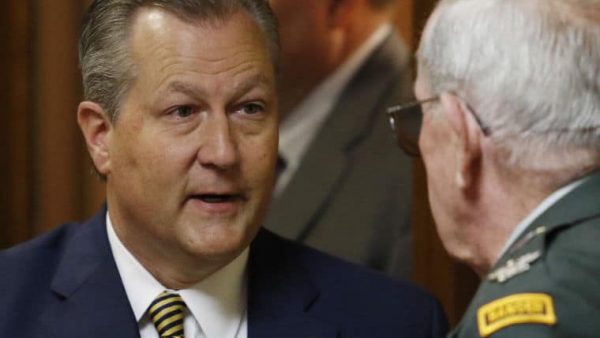 Mike Hubbard enters the courtroom Friday for the last day of ethics trial that removed him from office.

Alabama Republicans are figuring out what’s next after now former House Speaker Mike Hubbard was found guilty on 12 of 23 felony ethics charges last week. A jury determined Hubbard used his office for personal financial gain. Hubbard was considered one of Alabama’s most powerful politicians. For more on what this means for future political leadership in the state, WBHM’s Rachel Osier Lindley spoke with Natalie Davis, professor of political science at Birmingham-Southern College. Davis says, while Hubbard’s political career is over, his impact on the Alabama Republican Party will last for years to come.

Hubbard’s lasting influence on the party:

“Mike Hubbard is responsible for these large majorities, super majorities, in both the house and senate in the Alabama legislature. No one can take away what a masterful job he did in terms of putting Republicans, really, in the driver’s seat for probably a long time. Irony of this, of course, is that after the Republican sweep in 2010, their very first act was to improve and reform and fix ethics laws of the state.”

Not likely an appeal would vindicate Hubbard:

“Appeals are based on procedure. Was there something wrong in the way in which this trial rolled out? That is what they’re going to be looking for. The evidence is there. The challenge would be…whether that evidence was, in fact, improperly let in. My guess is they’re not going to prevail.”

“Citizens are inured. They’re used to this stuff and it just compounds over time.”

“This question of spillover is one I’ve given a little thought to. I’m not so certain, because you have a different casts of characters making judgements. It’s not a public referendum. The larger question to me is, when you add it up, how do you govern? The public trust variable has been gone for a long time. It just seems to be getting worse and worse and worse. We’ve got problems with ethics, so to the extent that those are on the front burner, how do you get to deal with education, and prisons, and roads and economic development? It’s really hard, I don’t see a way out until the public begins to think that government can operate in their interest, and not so much in the interest of these individuals.”

Will this change how Alabama politicians operate?

“Every time one of these folks gets convicted, the question is ‘Will that be a chilling factor?’ Will the woman or the man in legislature, in public office say, ‘You know what? People went to jail for what someone is asking me to do.’ It doesn’t seem to happen. These folks just seem to be disconnected from reality.”

On the Alabama GOP’s future:

“There will be elections in two years. The 2018 elections puts everything on the table. I have a feeling that there will be questions about ethics raised. We want someone to be Governor, Lieutenant Governor, Chief Justice…Attorney General…we want folks who stand tall in their commitment to public ethics. I think that may very well be the mantra. And, we have a cast of characters who are looking at 2018 thinking that all of these offices will be vacant, and one guy won’t be in the mix. That’s Mike Hubbard.”