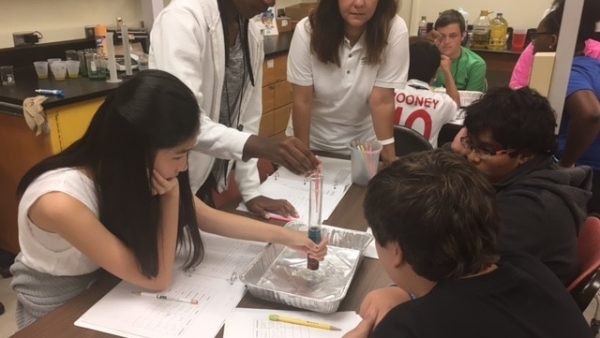 Participants in UAB's CORD program making a multicolored tower by pouring household liquids of varying weights into a cylinder.

Students in Alabama and throughout the South are back in school this month. However, long before the first day of school, hundreds of kids spent part of their summer in labs at UAB. The goal? Getting ahead of the curve in science class.

Forget the summer slide – that common loss of knowledge that often happens with children when school breaks. About a dozen rising eighth graders were huddled around tables, measuring solutions, tapping calculators, and making predictions on chemical processes in a science lab in the Community Health Building at UAB.

The students were studying density. They made a multicolored tower by pouring household liquids of varying weights into a cylinder. The result? A stack of different colored liquids.

Michael Wyss, director of UAB’s Center for Community Outreach Development (or CORD), says these experiences can give students an edge in the classroom.

“In the 21st century, the STEM areas — especially technology and also science — are really going to drive the economy,” he says. “So if we are not preparing students appropriately to take up those positions, their employability is going to be questionable and the U.S. economy is also going to be a problem.”

Robert Merchant of Homewood Middle School says he enjoys science and he learned some things he didn’t know by experimenting.

“I had known that you could make a density tower like this before. I tried to do it, and it didn’t actually work,” he says. “This helped me understand how this density tower works and that you can actually stack liquids on top of each other.”

Most students in UAB CORD camps are from Birmingham and surrounding areas. Some are on scholarships, and some families pay up to $175. Regardless, in the “We’ve got Solutions” lab, there was a common thread. Students had ideas about what they want in the future, and how science could get them there.

“I’m interested in going into the science field of medicine,” says Arnav Muppuri.

His enthusiasm is shared among his lab peers, and many have similar goals.

These students seemed to forget the fact that they were spending part of their summer with beakers instead or running on the beach or playing in the park.