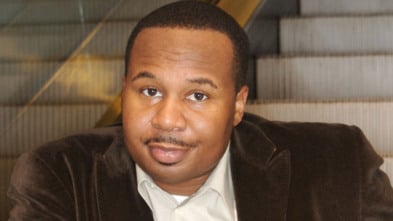 Comedy Central beams in reports from Daily Show correspondent Roy Wood Jr. from around the globe. But before he landed a role that blends his passions for journalism and entertainment, you could find Roy in Birmingham schools, on baseball diamonds, on radio stations and in clubs.

Recently, Roy Wood Jr. spoke with WBHM about his days in Birmingham and his climb from local comedian to the cast of one of the nation’s most popular nighttime shows.

What it takes to get the big breaks

“It just boils down to convincing yourself that you can do it and then doing everything possible to do it. You have to be willing to make sacrifices because there will be sacrifices. Belief is not enough. You have to show effort. I could sit on the couch and say I want to be the best comedian in the world. But at the end of the day, I had to get in my car and drive from comedy club to comedy club across the South for ten years just to prove that, then do it for another seven years in Los Angeles. It’s not enough to say I want to be on the Daily Show and I want to crack jokes.”

How the opportunity with the Daily Show came about

“They found me. They reached out. My name was thrown around the grapevine from a couple of sources. If you continue to do good work, eventually somebody will notice and they did. I got called into town for an audition. Next thing you know, boom. I was on the dadgum show. It happened pretty fast. I got the call to audition, and probably a week later, I got the call that I had gotten the part. I had nine days to move everything that I own from Los Angeles to New York City.”

How his journalism background helps

“The Daily Show, in and of itself, is a satire of television news. For me, I think I have been very, very lucky to have a career up until this point where pretty much everything I have done prepared me for what I am doing today on The Daily Show – from the acting, to the stand ups, even the prank phone calls I was doing in Birmingham on 95.7. There is an element of improv that is no different from interviewing someone.”

The impact of Birmingham school experience

“For me ultimately it was about sports. Sports is kinda where I came out of my shell. The baseball field was probably the only time I showed any remote semblance of being funny or being comedic. I was first baseman. Then I played left bench most of the time. Sometimes, I just played the bench. But sometimes the coach would put me in the game. He was very justified. If you would have seen me play, you too would have put me on left bench.”

“Most everything at the Daily Show is collaboration. One person might have pitched, then another person contributes an element, and someone else adds a joke. We have a meeting as a group, me and a couple of the writers, and we decide on the angle of the pack. Where that piece is concerned, it’s no different. Everyone knows it was ridiculous with all these governors were coming out and talking crazy about Syrian refugees. And the moment we realized one of them was from Alabama, well hey I am from Alabama. What better person on the staff to address the issue than Roy. You pair off with a couple of writers, and together you guys put together something that lambastes the governor just a tad.”

Courtesy of the Wood family

Response from the Wood family of journalists

“Most of my family is proud. They are happier than they were when I was doing prank phone calls. That’s for dang sure. I don’t think everyone loved me just sitting on the phone cussing out people. But you know, entertainment is entertainment. I think my father himself would have been very proud. It’s weird in a way, because I never thought I was following in my family’s footsteps. When I was getting ready to graduate college, the only thing I wanted to do was get on ESPN. As I started continuing with my comedy, it slowly became more and more socially aware. But once I got to that point, I just looked up and said oh my God, I’m just a goofy version of my Dad.”