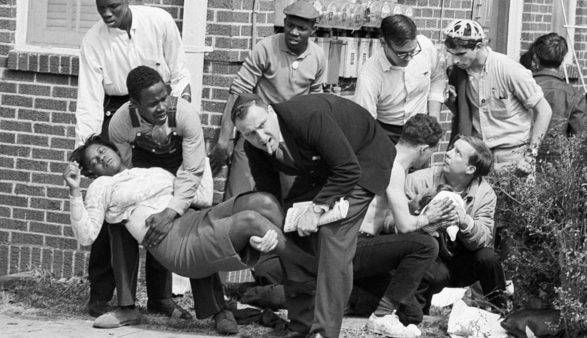 March 7, 1965 - Amelia Boynton is aided by two men after she was injured when state police broke up a demonstration march in Selma, Alabama. Mrs. Boynton, wife of a real estate and insurance man Samuel W. Boynton, was a leader in civil rights efforts.

“It was always a great delight to be in her presence,” recalls Reese. “She was always ready to help and assist people and the city.”

Reese calls Boynton Robinson as “a very outgoing person” who “always took a stand for what she felt to be right for all people, regardless of race or color or creed.”

Reese believes Boynton Robinson was thankful for how her civil rights work is remembered.

“She was able to at least live to see some of the great results of things that she had done in the past,” says Reese.

An interview with Boynton Robinson on her 100th birthday.

Amelia Boynton Robinson was a dedicated and courageous leader in the fight for civil rights. For most of her 104 years, Amelia committed herself to a simple, American principle: that everybody deserves the right to vote. Fifty years ago, she marched in Selma, and the quiet heroism of those marchers helped pave the way for the landmark Voting Rights Act. But for the rest of her life, she kept marching – to make sure the law was upheld, and barriers to the polls torn down. And America is so fortunate she did. To honor the legacy of an American hero like Amelia Boynton requires only that we follow her example – that all of us fight to protect everyone’s right to vote. Earlier this year, in Selma, Michelle and I had the honor to walk with Amelia and other foot soldiers of the Civil Rights Movement. She was as strong, as hopeful, and as indomitable of spirit – as quintessentially American – as I’m sure she was that day 50 years ago. And we offer our thoughts, our prayers, and our enduring gratitude to everyone who loved her.