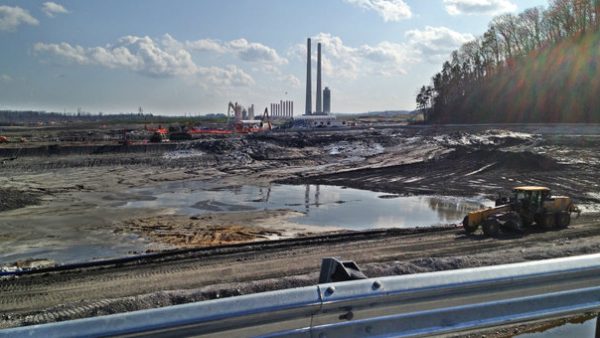 The site of the Tennessee Valley Authority coal ash disaster at the Kingston Fossil Plant in December 2008. Coal ash from the spill was hauled to a Perry County landfill.

Back in 2008, an estimated 1.1 billion gallons of toxic coal ash was released into the Emory River in Tennessee when a dam breached at the Kingston Fossil Plant. It was the biggest coal ash spill in the nation. Much of that coal ash was hauled to a landfill in Perry County, Alabama. Residents of the poor, mostly African-American county have filed a lawsuit saying they’re suffering as a result of the coal ash. But the landfill is also a vital part of the local economy.

William Gipson lives across the street from the Arrowhead landfill, just off a two-way country road in Perry County, Alabama, about 30 minutes outside of Selma. Sometimes, he says, it smells like rotten eggs. Garbage is one thing, he says. “I’m fine with that. But why would they put a contaminated landfill here in this neighborhood, right here at my front door?

The contamination Gipson is referring to arrived six years ago: 4 million tons of coal ash, hauled in after the dam breach in Tennessee. Several residents have filed a Civil Rights Complaint with the Environmental Protection Agency, saying the landfill is lowering property values, causing illness and letting toxic chemicals flow into nearby creeks.

Gipson says runoff from the landfill heads into a ditch and ultimately trickles into a creek.

“It just comes under the road and runs right through there.”

He says water at his house used to run clear from the tap. Now, he says, there’s a white film around his pots and pans. He says he just can’t tell what’s in the water, and he’s worried.

Perry County Commissioner Tim Sanderson says he doesn’t buy any claims that he landfill is unsafe. “I’ve always been a firm believer in ‘show me some proof’,’ ” he says. “You can make allegations all day long.”

Fact is, Perry County needs this landfill. People have been leaving in droves; the unemployment rate is among the highest in the state. Schools are closing. So are restaurants and shops.

“Jobs are not here,” Sanderson says. “So people are going where the jobs are because of gas prices and other reasons.”

Perry County’s median household income is $28,000. For every ton of waste collected at Arrowhead, the county gets a dollar. Four million tons of coal ash meant $4 million, plus hundreds of thousands of dollars in property taxes and savings on the county’s own dumping fees.

Sanderson says people who complain about a landfill in Perry County aren’t being realistic.

“Everybody was saying, ‘Oh we’re killing the kids, we’re causing all these problems,’ ” he says. ” ‘Let’s carry it to Mississippi and kill all their kids and cause problems over there.’ That’s not the good Christian way.”

Mike Smith, attorney for Green Group Holdings, which owns the landfill, says an elaborate liner system protects the groundwater, and he says the water is tested regularly.

“It’s not nearly as bad a water as you would think it would [be], or as other people have led the residents to believe it is,” he says.

The Alabama Department of Environmental Management inspected the landfill for drainage problems last month. The results: certain areas need to be “stabilized” with vegetation, and inspectors noted cloudy water leaving the landfill property where it shouldn’t be.

Smith acknowledges some of the issues noted in the report, and he says they’ll be addressed. He also points out that the $4 million the coal ash deal brought Perry County was a windfall, some of which went to the schools.

“But for that,” Smith says, “they would’ve had a severe cutback in their services.”

Arrowhead has also tried to win over residents by cleaning up parks and buying the high school a new PA system. But this month Arrowhead started aggressively marketing itself as the place to dump coal ash. New EPA regulations require utilities to comply with strict standards, and as a landfill, Arrowhead isn’t subject to the new EPA rules.

“Now we’re getting to the area now where our partial closure’s been conducted,” Smith says, “and that’s the area where the coal ash has been….

Smith points out the area where the last load of ash is buried.

“It is safely stored away,” he says.

If Arrowhead gets its wish, there will be lots more coal ash coming to Perry County.