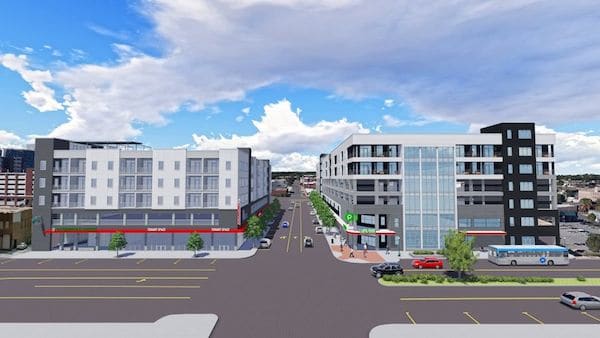 The Birmingham Design Review Board on Wednesday approved developer’s design plans and permits for a Publix grocery store downtown at 3rd Avenue South and 20th Street. The 35,000 square foot grocery and pharmacy will anchor a $20 million dollar development that will include three apartment buildings, retail stores, restaurants, and office space. Dick Schmalz of RGS Properties Inc. and Scott Bryant of Scott M. Bryant & Co.’s presented renderings to the board.

The Publix could open as early as Summer 2016. Many locals are excited about the announcement.

“When we moved downtown there wasn’t a full service grocery store, and it didn’t deter us,” said Michelle Newberry, who has lived downtown with her husband and daughter for two years. “But now having this where we can walk, we can ride, we can still drive to grab diapers and have it right downtown, where we don’t even have to get on the expressway — is going to be icing on the cake.”

The new Publix will look similar to most store locations throughout the state with slight adjustments to fit the urban setting. Architect Tammy Cohen said the plans include a glass elevator, an upper parking deck, and green space.

But the new development is about more than just convenience. David Fleming, President and CEO of Rev Birmingham, said this new Publix will help change downtown’s status as a food desert. According to the United States Department of Agriculture, more than 23 million people live in food deserts — urban neighborhoods and rural towns without a large grocery store, and little access to healthy and affordable food.

This can contribute to poor diet, and can lead to higher levels of obesity and other diet-related illness, such as diabetes and heart disease. Areas of New York, Chicago, Detroit and other major urban cities, including downtown Birmingham, have been designated as food deserts, impacting as many as 88,000 Birmingham residents.