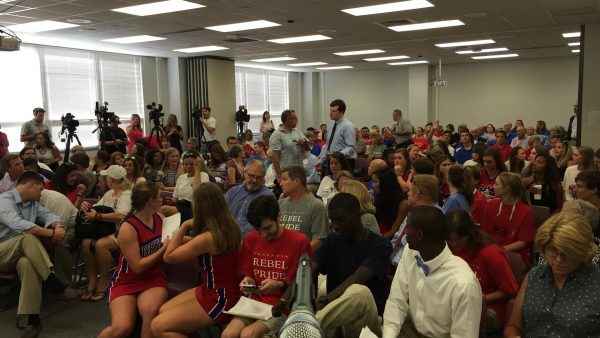 There wasn't a single free seat at the Vestavia Hills Board of Education meeting Wednesday night. Almost 30 people addressed the Board over more than two hours about whether to keep or drop the system's "rebel" mascot.

An emotional issue across the South and the nation came to a head in Vestavia Hills last night — the debate over symbols related to the Confederacy. The school board held a public forum, partly spurred by residents who want the system to drop its “Rebel” mascot. Listen above or read below. Under the text, you can access audio of the entire meeting. To learn more and listen to analysis by Carsen and WBHM News Director Rachel Lindley, click here.

People gathered in the heat outside the Board of Education building hours before the 6 p.m. school board work session. One of them was Vestavia High graduate and parent Laurie Webster, a rebel mascot supporter:

“All we want is for the students to be respected enough to make the decision themselves,” she says, adding that Vestavia High School students, whom she calls intelligent and “well-versed,” should have the chance to vote on the matter.

“Respect the students” was a familiar refrain — many pro-mascot speakers ended their comments with those words. They also spoke of traditions, and said the mascot was not intended to be racist and isn’t seen that way now.

But speakers on the other side contradicted that, and added that some people — especially students — have kept quiet because they fear retribution.

Lisa Borden, the mother of two high-schoolers, says, “Both of my girls would very much like to have the Rebel mascot replaced. They’ve always been uncomfortable with it. And I certainly feel the same way. I just feel that you can’t divorce Colonel Reb from his history. You just can’t paint over that and pretend it’s not the case.”

Students, parents, and local leaders spoke for more than two hours addressing the crowd of almost two hundred after dozens had to be turned away. The Board plans to decide whether to keep the mascot by the end of the month.