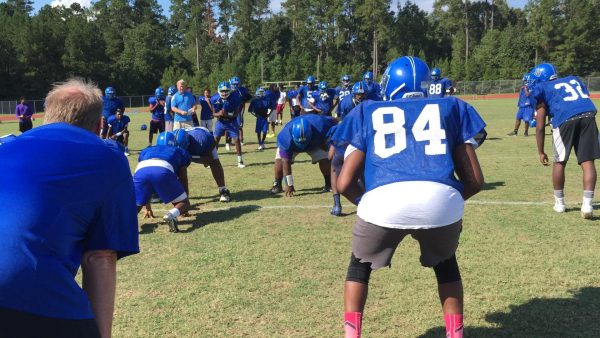 When it comes to Division I football, Southern states including Alabama, Florida, Georgia, and Louisiana, produce the largest number of recruits per capita.

New NCAA rules take effect for college athletes next fall. A 2.0 GPA and a decent ACT score won’t be enough anymore. To avoid the bench, freshmen will have to come in with a 2.3 GPA in core classes — reading, math, science, and social studies. And players in high school — where standards are generally lower — are feeling it.

In the second part of the Southern Education Desk series on athletics and academics, All In The Game, Amy Jeffries reports from Louisiana.

Even with a wad of chewing tobacco in his cheek, Coach David Masterson is clear.

“I don’t care what the NCAA requirements are because I don’t view myself as a farm system to them,” Masterson says.

The NCAA’s “2.3 or Take a Knee” poster still hangs above the coach’s desk.

If their grades fall below a C average — they can’t play, under a Louisiana High School Athletic Association rule. There are similar rules in most states.

Texas Tech Professor Angela Lumpkin found the regulations in Kansas did focus the minds of high school athletes there.

“Because I want to play, I’m going to do what I need to do to perform in the classroom, so I keep that right,” Lumpkin says.

Of the high school athletes in the Kansas cohort Lumpkin studied, 97.6 percent got a diploma in 2012. Only 89.5 percent of their non-athlete classmates did.

That’s what Coach Masterson really cares about — that his players graduate from Northeast, where a quarter of all students don’t make it in four years.

On the practice field, they’re thinking about playing college football at places such as Alabama or LSU.

At Dutchtown High in Geismar, Louisiana, senior defensive back Rickey Thomas is dreaming of Division I too. He’s been hearing from his coach for the last three years that to play in college he needs a 2.3 GPA.

“I thought I wasn’t gonna make it when I heard it the first time. I went to summer school and I retook some of my old classes from 9th grade that I barely passed,” Thomas says.

Coach Benny Saia says Thomas has really pulled himself up by the bootstraps.

“He worked his tail off. He’s given himself a chance,” Saia says.

And so did another Dutchtown player – Eddie Lacy.

Coach Saia doesn’t think Lacy would have hit that 2.3 mark, and might never have had the chance to make the millions he’s making in the NFL.

“He wouldn’t have I don’t think. And he’s making way more money than me and you right now,” Saia says.

Walter Harrison, president of the University of Hartford, chaired the NCAA committee that came up with that 2.3 GPA rule.

“We’re talking about having a C+ average. Having that kind of average will help you graduate, and even though you may be hellbent on being a professional player, you may eventually find that that’s not where you’re going to be and then you’ll be well prepared to do something else,” Harrison says.

In his years of coaching, Benny Saia has seen the NCAA raise the academic bar more than once.

“I just hope we don’t raise the bar so much that we eliminate kids from having a chance to reach the bar,” Saia says.

This report is supported by a grant from the Corporation for Public Broadcasting. Tomorrow, we look at academic support for college athletes.

More All In The Game Coverage 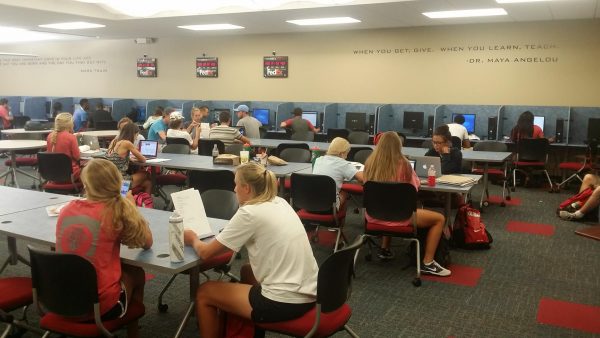 Football, basketball, baseball, gymnastics. College sports are a way of life in the South. Fans pack into stadiums or glue themselves to TV's to watch their favorite teams battle it out. But the pressure on a young person to succeed on the field or court is only half the battle. College athletes are also expected to succeed in the classroom. 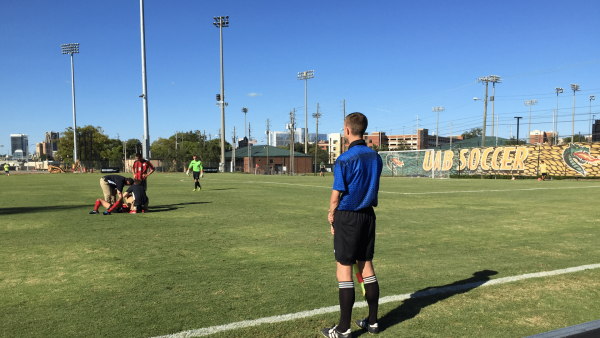 Across the South, college football is in full swing. But football is just one of dozens of NCAA sports. In any season, student-athletes are pushing themselves on the field, in the gym, and in the classroom. They get scholarships and generate billions of dollars, but they also get hurt and struggle with their studies on […]

More All In The Game Coverage