A Window On Other Arenas: Sports, Race, And More With UAB Sociologist Adrienne Milner 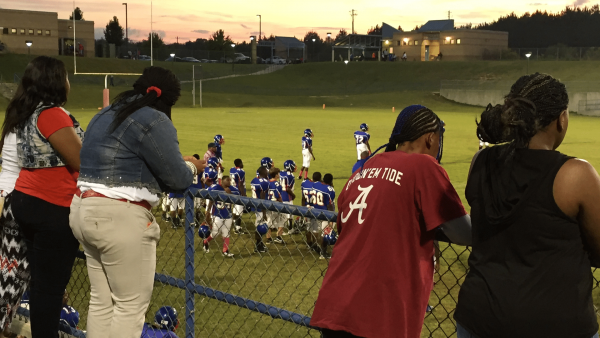 Spectators take in the middle school football game at Wilcox County High School in Camden, Alabama last year. It was the main event in the area that night.

You don’t have to be a scholar to know that African-Americans are heavily represented in contact sports like football and basketball, but underrepresented in “lifetime sports” like tennis or golf. Some casual observers have come up with relatively simple explanations for that phenomenon. But a University of Alabama at Birmingham sociologist and author who studies race and gender in sports says the reality is anything but simple, or fair. Adrienne Milner, who played college basketball until an injury ended her athletic career, tells WBHM’s Dan Carsen that she’s intrigued by inequity in all fields, but that — for reasons you might not guess — sports are special for her. Click above to hear the five-minute on-air interview. Below are excerpts and an extended web-exclusive version of the conversation.

In many institutions, including the criminal justice and education systems, it’s easy to spot racial disparities, says Milner. But in some sports, there are so many African-American players that observers assume the system must be meritocratic, she says. And according to her work, that’s not the case.

Dr. Adrienne Milner of the University of Alabama at Birmingham.

There are ethnic and gender disparities at decision-making levels in sports, and with regard to access to low-contact sports like tennis or golf, says Milner. With restricted access, besides the inability to play and improve, there is also less “role-modeling,” which further lowers participation. She adds, “Desegregation was not about, ‘do we need Harvard to be 50 percent black, 50 percent white?’ It was, ‘can black students get to Harvard?’” And she says that when there’s “overrepresentation of a certain racial group being funneled into a violent sport, such as football, which is taking years off people’s lives and causing brain injuries … I would call that an epidemic …. The sport is getting more and more violent. We’re hitting harder. We have more physical prowess in terms of weightlifting” and other training methods, she says. And the injuries are not evenly spread, demographically speaking: “The outcomes are unclear for the future, but when 10 to 13 percent of the population is 70 percent of the NFL, we wonder why is this happening and what can be done about it.”

Government Role in Equity of Opportunity

Milner thinks the problem of unequal access to safer sports is severe enough to warrant government subsidies for public golf courses and swimming pools in low-income areas. “In other countries, golf is not as much of a ‘rich person’s sport,” she says. “There are more courses in poverty areas.”

“Race is not real in and of itself. Racial disparities do not exist biologically … there is no ‘football gene,’” says Milner.

Milner points to the value of sports for changing social realities through perception and example: “we saw that when Jackie Robinson broke the color barrier in baseball before schools were desegregated.”

Here is the 27-minute web-only interview:

WBHM and the Southern Education Desk will be producing a comprehensive series on the intersection of academics and athletics, coming in September.