Why 2022 was a rough year for Gulf South food pantries, and those who need them 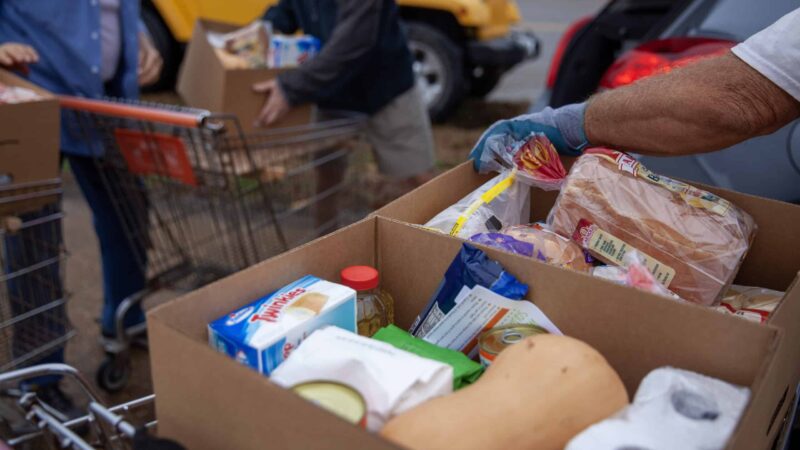 Volunteers prepare to load boxes of food into cars on Dec. 8, 2022, at the Saint Luke Food Pantry in Tupelo, Mississippi.

Inflation and the end of pandemic relief programs have kept lines long at food pantries in the Gulf South. Yet those same problems have also caused trouble for the pantries themselves.

Pantries and their suppliers no longer receive the same kind of federal support they did during the first two years of the COVID-19 pandemic, leaving them to front the ever-growing, inflation-fueled food bill. And while the economy’s showing continued signs of strength — inflation has slowed and unemployment has stayed low — the need for food assistance remains high as economists warn of a potential 2023 recession.

Here’s a look at what the past year has been like across the food aid chain for suppliers, pantries and the people in need of help.

From unprecedented to new normal

The need for food assistance in 2020 and 2021 was unprecedented, according to Michael Ledger, president of Feeding the Gulf Coast — which supplies food to pantries and other partners across some of the lower counties in Mississippi and Alabama, as well as the Florida panhandle.

This year, Ledger no longer uses the unprecedented label. That might sound like a good thing, but it’s only because those long lines are now the new normal.

“Looking back to 2008 and the Great Recession, it took 10-plus years for those folks that were sort of on the lower rungs of the financial ladder to get back where they were,” Ledger said. “It takes a long time for people to right the ship.”

While demand has remained high, assistance for the supplier has not. Ledger said pandemic-era federal aid programs, like the Coronavirus Food Assistance Program, provided Feeding the Gulf Coast with millions of pounds of extra food. Now, that program has ended and donations have also slowed. Filling the gap between need and supply has meant Feeding the Gulf Coast spent around $3 million this year. Before the pandemic, the organization spent closer to half a million dollars each year.

“We’ve stepped in to try to fill in the gap,” Ledger said. “But that’s only a possibility for a short time.”

This has led to the organization switching to providing more produce because it’s cheaper, and it has the added bonus of being healthier, too.

In New Orleans, the Broadmoor Improvement Association’s food pantry gets its food from another supplier, but more produce has made it into its orders, too. The fresh fruits and veggies are an improvement over last year — when even canned fruit was rare. In November, the pantry received boxes of pomegranates, grapes, apples, peaches and plums.

But while the substance of the shipment has changed, ordering while the supply still falls short of the demand causes tough competition.

Nyia Pulliam, the pantry’s coordinator and BIA’s lead social worker, compared ordering food for the pantry to buying Taylor Swift tickets. A minute before midnight each Tuesday, she’s on her computer — waiting on the webpage for Second Harvest, which distributes food in South Louisiana. Once the new day begins, she refreshes the page and dashes to submit her order. If she’s not done in 30 seconds, half of her cart is gone.

“It feels like The Hunger Games,” Pulliam said. “I’m fighting for my spot and to make sure there’s food for this community.”

The hardest thing to find is meat — something Pulliam says is a problem across the South. She can normally at least count on getting hot dogs, though it’s not the healthy option she would prefer.

One pandemic trend that’s stuck around is drive-thru food pantries. They were brought in for the social distancing and stayed for the speed.

At the Saint Luke Food Pantry in Tupelo, Mississippi, a constant loop of grocery carts brings food from inside the pantry to the waiting line of cars that stretches onto the highway.

The pantry’s leadership is considering switching to a walk-in model where customers could pick their own food instead of sometimes getting stuck with food items they don’t like or know how to cook. Butternut squash, for example, was a problem for a lot of the pantry’s visitors in December.

“No, I won’t be cooking that butternut squash,” Yvonna Meadows, who’s been coming to the pantry for eight years, said. “Butternut squash, to me, is strictly decoration.”

But a walk-in, choose-your-own pantry requires a lot more volunteers, hours and a bigger space. And with the need for food assistance still so high in Tupelo, getting people through quick matters.

The pantry opens at 8 a.m. on Thursdays, but James Kimbell arrived a little after 3 in the morning on one December morning.

“I come in here early to get my stuff and get out, ’cause so many people come up in here,” Kimbell, another regular at the pantry for years, said.

October set a record number of households helped at the pantry with 2,700. November was lower, but possibly because it was closed on Thanksgiving. That month still had a 47% increase in households compared to the same time period in 2021.

Many of the food pantry’s visitors say inflation has made this year more difficult than the last. For Shannen Soden, it’s her first year going to the pantry. She’s grateful for the assistance, but one thing that hasn’t changed over the past year is the stigma. In the past, she’s seen the look other people give when someone mentions they rely on a food pantry.

“It’s on their face,” Soden said. “It’s like their view of that person completely changes. And then now I’m here, you know. So they would look at me the same way. I worked for many years and sometimes things happen. I think people need to understand that people that come to a place like this need help.”