The story of ‘the Colony’: How a small, Black community thrived, survived in Cullman County 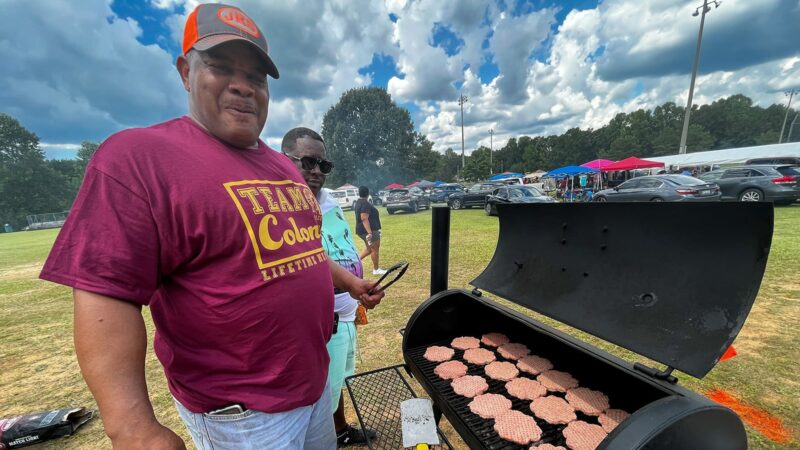 Jeff Flanigan, 59, helps grill hamburgers for the 800 people celebrating Colony Day in Colony, Alabama, Aug. 6, 2022. Flanigan is a truck driver who’s been all over the country, but he said he’d always come back to Colony. “This place has got so much history. You wouldn't believe the history,” Flannigan said.

Only a couple hundred people live in Colony, Alabama, but on a hot summer day in August, around 800 people are in town for an annual reunion and homecoming.

It’s everything you want from a Southern cookout. The adults sit back on fold-out chairs under tents, fanning themselves as they watch kids giggle their way through outdoor games at Vivian Allen park. All the while, enough hamburgers to feed an army sizzle away on the grill.

It’s Colony Day — a celebration to honor the town’s history as one of Alabama’s oldest Black communities — and longtime resident Inez Malcom looks forward to it each year.

“We really enjoy our community,” Malcom said. “A lot of people from different areas — they don’t believe that Black people live in Cullman County and we do. We coincide with everybody and everybody gets along.”

Residents say to live in “the Colony,” as they call it, is to embrace the simple life. Things are slow, kids play freely in the woods and neighbors always share with one another.

“Nobody in my community will ever go hungry because there’s always somebody that knows somebody,” Malcom said.

Other residents at the celebration said the same thing — that Colony was a family, and that the town is not only home to living history, but a testament to its residents’ own resilience.

Colony was settled following the Civil War by formerly enslaved people in the mid-19th century on land that wasn’t known for being very fertile, Robert Davis, a history professor at Wallace State Community College in Hanceville, Alabama, said. Its infertility kept would-be white settlers away, meaning the town was largely left alone. As a result, it became a safe haven for Black people, Davis said.

Despite the odds, Black farmers were able to work their land, make money and eventually buy their plots. A majority of the town’s residents own the land they live on and it’s been passed down from generation to generation.

“African-Americans from all over the state would move to the Colony. It was like Harlem was to New York or Ensley was to Birmingham,” Davis said. “The black community in Cullman County owned more land than any other community. They had their own stores, their own mills, their own schools — the whole nine yards.”

But when Cullman County was founded in 1873 by Johann Gottfried Cullmann, it was advertised as a place with “No Black and No Indians,” and its largest city — Cullman — was a sundown town. Davis said there were no Black people, or at least very few, in the county.

The Colony wasn’t originally within Cullman County’s boundaries, but in the early 1900s, Davis said county leaders saw mines opened on local coal deposits were bringing jobs and money for Black laborers in the Colony — and they wanted in on those economic benefits.

“You can’t bring Stout Mountain and the coal mines in unless you also bring in the Colony,” Davis said.

Eventually, an agreement was made to shift the county lines to include Colony in Cullman County.

A complex relationship with the county

Combining the area’s oldest Black town with a known anti-black county seems like it would have been a recipe for disaster. Originally, people in the Colony would avoid going into Cullman.

“Cullman had a terrible reputation,” said Earlene Johnson, one of Colony’s oldest residents. “Blacks were afraid to come through Cullman, even on the trains. And they would pull the shades down when they rolled through Cullman.”

But Johnson says the relationship between the town and the county was not as hostile as some would expect. There definitely were racial tensions between the Colony and the rest of Cullman county, but it wasn’t as bad as in other parts of Alabama.

Johnson went to college at Alabama State in Montgomery at the height of the Civil Rights Movement, when the Freedom Riders were passing through Birmingham and Martin Luther King, Jr. was marching from Selma to Montgomery.

“We did not have that kind of fight going on,” Johnson said. “[The] struggle where they put dogs out and what have you.”

Residents of the Colony were largely self-sufficient, so Johnson said they didn’t need to go into Cullman often, but when they did it was fine. Her college friends from Montgomery got a small taste of this dynamic when they took Johnson up on an offer to visit her at home in the Colony.

The group decided to take a trip to Cullman and were surprised by the number of white people greeting them nicely.

“We went shopping in Cullman and everybody was speaking [to me] because you know a lot of the people in the small town recognized me saying ‘Hey Earlene, how you doing?’” she said. “And it made them nervous.”

After college, when she moved back to Colony, Johnson became a teacher and later mayor of the town.

Johnson said she applied for any and every grant to get Colony a library and a town hall building, and her team’s work before that to grow Colony led to the town’s official incorporation in 1981. Johnson, who is now 84, hopes a new generation can continue to build up Colony.

Colony Day is one of those efforts from Jasmine Cole, a 27-year-old Colony resident who said she was inspired by Johnson when she was a young girl.

Colony’s population was increasing for a while but now it’s on the decline. Cole is the town’s youngest council member and she organized the last two Colony Day celebrations in an effort to keep people coming back.

“I have to follow in her footsteps,” Cole said. “I’m proud of this area. It’s always been a good community, so it means a lot to me. It’s my home.”

“I don’t want people to think that we pull in that slavery bit to get some sympathy,” Purifoy said. “We were able to benefit from becoming a township by lifting ourselves up by our own bootstraps.”

Purifoy and others want to grow the community by uplifting Colony’s self-made legacy and its resilience.

“I want Colony to be a community of growth,” Purifoy said. “I want to see our community with a subdivision so that we can have some of our young children grow up, come home and build houses and live here and take Colony on to a bigger, brighter future.”