A Louisiana woman sought a legal abortion and was denied. Now, she wants lawmakers to step in 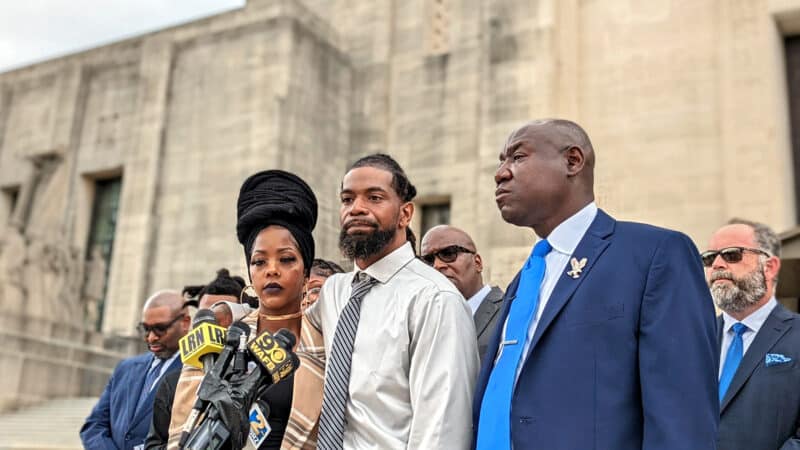 Nancy Davis (left) stands with her partner, Shedric Cole (center), and lawyer, Ben Crump (right), in front of the Louisiana legislature, Aug. 26, 2022. Davis asked state lawmakers to convene a special session to amend the trigger ban criminalizing most abortions during a press conference.

Nancy Davis, a Baton Rouge, Louisiana woman who was denied an abortion after her baby was diagnosed with a lethal anomaly, is calling for the Louisiana legislature to convene a special session and amend the trigger ban criminalizing most abortions.

At a press conference Friday, Davis spoke with tears in her eyes about the “emotional roller coaster” she’s endured since she was told in late July that her baby has acrania — a lethal condition where the skull and brain don’t form.

“I want you to imagine what it’s been like to continue this pregnancy for another six weeks after this diagnosis. This is not fair to me. And it should not happen to any other woman,” Davis said.

She stood with her children, her partner and a team of lawyers in front of the State Capitol in Baton Rouge on Friday morning to call for lawmakers to clarify the near-total ban.

Woman’s Hospital in Baton Rouge denied Davis an abortion this month despite the fact that Davis’ diagnosis would qualify her for a legal abortion under one of the narrow exceptions to Louisiana’s ban. It allows for the termination of “medically futile” pregnancies.

Davis said her doctors “seemed confused” about the state’s abortion laws “and afraid of what would happen to them.”

Woman’s Hospital officials have said they denied Davis an abortion because of other anti-abortion laws that also went into effect after the U.S. Supreme Court overturned Roe v. Wade in late June.

The fallout from overturning Roe is just beginning.

But if you need grounding right now and an answer to how we got here, listen to Banned. All 7 episodes are out. A bonus EP is coming.

The state’s trigger law carries a maximum 15-year prison term and a $200,000 fine for a physician found guilty of providing an illegal abortion. Since the law took effect, doctors have described an environment of fear and anxiety in Louisiana hospitals over providing abortions that had been routine care before the law took effect.

“Of course, medical professionals don’t want to risk prison or hundreds of thousands of dollars in fines for making the wrong call,” said Ben Crump, a civil rights litigator and Davis’ attorney.

State Sen. Katrina Jackson (D-Monroe), who authored the law criminalizing most abortions, released a statement this week claiming Woman’s Hospital had misinterpreted the near-total ban and now “has clarity regarding this exception and is correctly interpreting the law.”

Crump told reporters that the law is “clear as mud.”

“By imposing themselves between Ms. Davis and her doctors, Louisiana lawmakers inflicted unspeakable pain, emotional distress and physical risk upon this beautiful mother, this loving mother,” Crump said. “They replaced care with confusion, privacy with politics, options with ideology.”

Crump said he’s received calls from people in similar situations to Davis, and that lawyers are considering the next legal step in Davis’ case.

Davis is planning on receiving her abortion from a North Carolina clinic next week.