Landfill fire near Birmingham burns for more than a month 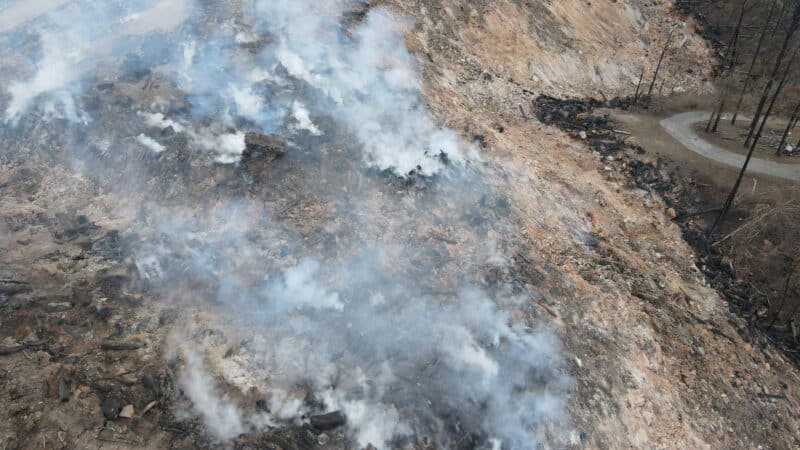 An arial photo shows smoke billowing from an underground fire at the Environmental Landfill, Inc. Property in December 2022. Courtesy of Moody Fire Department/Facebook

BIRMINGHAM, Ala. (AP) — An underground fire has been raging at an environmental landfill near Birmingham, covering Alabama’s largest metro area with smoke.

Now, state officials, local fire departments and county commissions are trying to determine the next steps and who will cover the costs associated with putting it out, al.com reported.

The fire started about a month ago at the Environmental Landfill, Inc., facility in St. Clair County, near the Birmingham suburbs of Moody and Trussville. James Mulkey, a fire inspector with the Moody Fire Department, said the department received its first call about the fire Nov. 25 at about 7:45 a.m.

“The fire has gotten into the pile of debris, which is very large,” Mulkey said. “The actual size of the debris pile, we’ve heard estimates from 23 to 50 acres, and it’s multiple layers. In some places, this thing is 100-150 feet deep. We’re not sure because of the way it was done. They would bring stuff in, pile dirt on top of it and then put another layer in.”

According to an Alabama Department of Environmental Management update posted Thursday, extinguishing the fire is “critical,” but will be difficult because of its location.

“It appears that unauthorized solid waste (i.e. non-vegetative) was removed from the site following an ADEM enforcement action prior to the fire,” the update said.

The landfill is not regulated by ADEM because it is only supposed to accept “green waste,” things like storm debris, leaves and limbs and vegetative material. In reality, though, tires and other materials have been found at the landfill amid the fire.

“ADEM is aware that there is some unauthorized solid waste on this site. ADEM will determine the appropriate enforcement actions following the conclusion of its investigation and review of relevant information,” Battle told al.com via email.

Mulkey said he’s seen tires in the disposal area, but did not want to speculate as to whether there is other unauthorized waste in the burning pile. Efforts to reach the landfill owners for comment via email and telephone were unsuccessful.

ADEM has cautioned residents who live near the facility to consider limiting outdoor activities, installing high-efficiency filters in their heating and air conditioning systems and sealing their home with caulk or other materials where outside air may be leaking in.

The department also said the smoke is likely to continue being a problem for some time and “those with breathing-related health conditions may consider temporarily relocating.”

The fire is burning in unincorporated St. Clair County. The Moody Fire Department responded to the fire first because it was the closest but the area is not under their jurisdiction. It has been acting with the Alabama Forestry Commission and the St. Clair County Commission to make decisions, but the agencies are looking to take more aggressive action to extinguish the flames.

“All options are on the table,” Mulkey said. “Letting it burn itself out was one option that we looked at, but we realized that’s a pretty in-depth (fire) and we really can’t give a timeline on it.”

There’s also the issue of who makes the ultimate decision on a plan of action and who pays for it.

“It’s unincorporated St. Clair County, so the county commission will have a great deal of say,” Mulkey said. “As for regulatory agencies, and who’s ultimately responsible and financially responsible for this thing, that’s still a subject of some debate.”

ADEM is primarily investigating the fire to see if violations occurred that could be prosecuted once the fire is extinguished.

The Jefferson County Department of Health, which regulates air pollution in the Birmingham area, said it has received odor complaints, but the problem is outside its jurisdiction.

Michael Hansen, executive director of Birmingham-area air quality group GASP, said the response from the state has been insufficient.

“It’s absolutely unacceptable that state agencies are not doing more to protect the people from this dangerous air pollution event,” Hansen said. “We need a multi-agency state and local response to this situation.”