Jury: No defamation from Roy Moore or woman who accused him 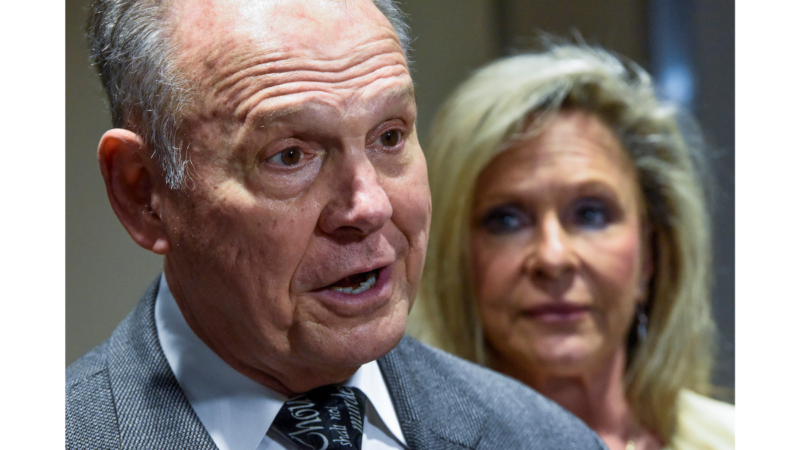 Roy Moore, left, and his wife Kayla Moore, right, pause to comment as they leave the courtroom at the Montgomery County Courthouse in Montgomery, Ala., on Wednesday, Feb. 2, 2022. A jury has found that no defamation occurred in dueling lawsuits between Moore and Leigh Corfman, the woman who accused him of molesting her when she was 14. Corfman came forward during the 2017 Senate race and said Moore sexually touched her in 1979 when he was an assistant district attorney in his 30s.

MONTGOMERY, Ala. (AP) — A jury on Wednesday found that no defamation occurred between former U.S. Senate candidate Roy Moore and the woman who accused him of molesting her when she was 14.

In allegations that roiled the 2017 Senate race in Alabama, Leigh Corfman said Moore sexually touched her in 1979 when she was a teen and he was a 32-year-old assistant district attorney. Corfman filed suit alleging Moore defamed her by branding her a liar when he denied the accusations. Moore countersued, claiming Corfman injured his reputation with false allegations meant to hurt him politically.

The jury deliberated for about three hours before ruling that neither party had prevailed in their claim against the other.

Moore said afterward that the decision was vindication for him and a “very heavy burden” had been lifted.

“There is no other way to interpret this but a victory,” Moore said, with his wife, Kayla, standing beside him.

“I’ve always said these allegations were false and malicious. I mean that today. I’ll say that today very clearly. There were meant to overturn a very successful election in 2017 to the United States Senate and they did exactly that,” Moore said.

Corfman’s attorneys rubbed her back seemingly to comfort her after the verdict was read.

Corfman attorney Neil Roman said the decision was not what they had hoped for but noted that jurors must have given credibility to her claim because they didn’t rule Corfman defamed Moore when she told The Washington Post he molested her.

“This is not a victory for Roy Moore. It is not a vindication of him. Although we are disappointed that the jury did not find that Mr. Moore statements about Leigh rose to the level of defamation, we are gratified that the jury necessarily found Leigh was telling the truth about her experiences with Mr. Moore in 1979,” Roman said.

Asked about her reaction to the verdict, Corfman said the trial was somewhat emotional for her.

“I’ve lived with this for over 40 years. And to have it once again brought out in this manner is difficult for me,” Corfman said.

After meeting for about an hour Tuesday, the jury asked to view videos when they returned Wednesday of statements Moore made at campaign events and in media interviews denying the accusations.

Jurors also asked for a definition of defamation under state law. Circuit Judge John Rochester repeated instructions on the law, including that to find defamation, jurors must determine that Moore or Corfman made false public statements — either knowingly or with reckless disregard for the truth — that damaged the reputation of the other.

Although Corfman was seeking only a declaration that she was defamed, Moore was asking for money.

Corfman’s allegations, first reported by The Washington Post, upended Moore’s Republican campaign in 2017 and he lost to Doug Jones, a former federal prosecutor who became the first Alabama Democrat elected to the Senate in 25 years. Jones lost the next election to Republican Tommy Tuberville, who now holds the Senate seat.

Moore, a conservative Christian known as the “Ten Commandment judge” for displaying the Old Testament laws in courthouses, was twice removed as chief justice of the Alabama Supreme Court for violating judicial ethics rules.