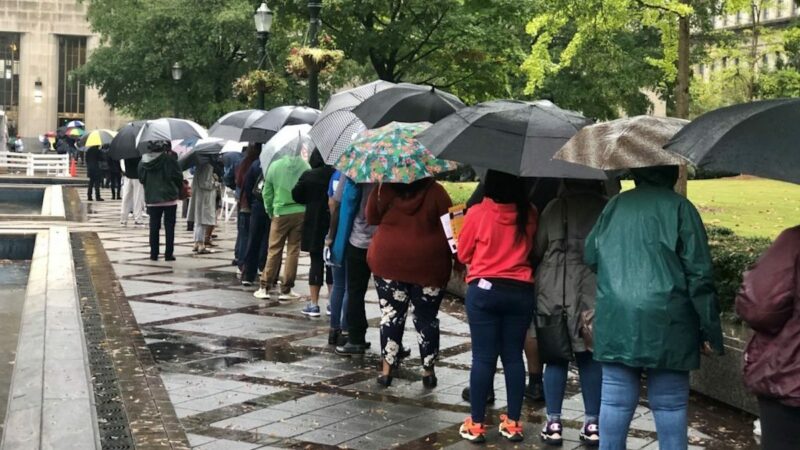 Hundreds of voters stood in line in the rain at the Jefferson County Courthouse to cast absentee ballots in person before the November election. Federal funds helped repay election officials for extra steps they had to take during the unusual year.

More than $359 million in federal dollars flowed through the hands of Jefferson County and Birmingham city officials in the past two years to help the area get through and past the pandemic. And more money is yet to come this spring.

Of course, that’s a drop in the bucket of the $3 billion in federal money that came to the area when direct aid for businesses, schools, hospitals, and other entities are considered. But looking at where the major portions of that funding is going shows the needs of the community and priorities set by its leaders.

The city and county have spent more than $72 million on housing-related programs and assistance. Much of that money went to rental assistance, programs to improve neighborhoods, housing rehab, improvements to recreation facilities, homeless assistance, utility assistance, other forms of helping people at risk of losing their homes, and groups that help with these efforts.

At least $37.7 million was handed out by the county and the city in assistance to smaller governmental agencies. Money under some of the other categories also would have paid relevant costs for the agencies and government offices.

About $33.5 million went to small business relief, recruitment of conventions, aid to tourism entities, job training assistance, the World Games, and remediation of the Daniel Payne industrial site. Some of that amount also could have paid for food assistance. Money under some of the other categories also could have paid relevant costs for businesses.

More than $14 million went toward COVID-related public health expenses such as testing and vaccination, mental health services, and funding for health care providers. Some of the money also went for food pantries, job assistance, and emergency services.

More than $1.4 million was awarded to Jefferson County to make up for extra costs associated with the elections in 2020.

The city prioritized spending on its employees, allocating $17.7 million to bonuses for city employees and vacation buyouts for fire, police, and public works employees. The county also gave its employees 3% raises and longevity pay, funded through the general fund.