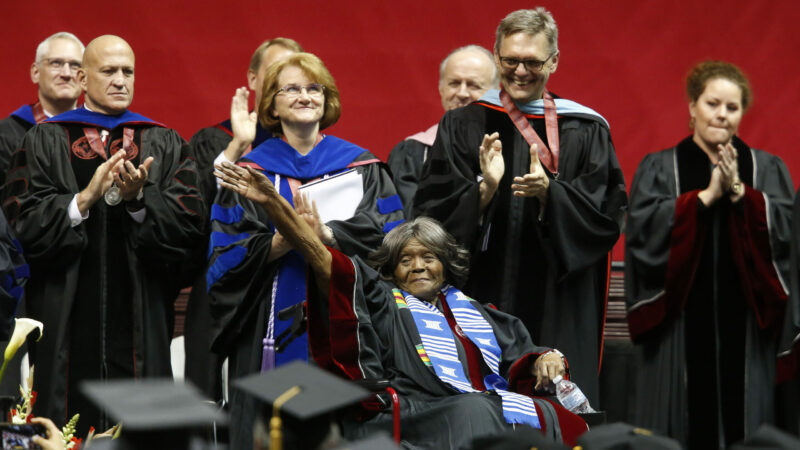 Autherine Lucy Foster, center, the first black student to attend the University of Alabama, waves as the university awarded her an honorary doctorate during a commencement ceremony, on,May 3, 2019, in Tuscaloosa, Ala. The University of Alabama is reconsidering its decision last week to retain the name of a one-time governor who led the Ku Klux Klan on a campus building while adding the name of the school's first Black student. Trustees will meet publicly in a livestreamed video conference on Friday, Feb. 11, 2022, to revisit their decision to keep the name of former Alabama Gov. Bibb Graves on a three-story hall while renaming it Lucy-Graves Hall to also honor Autherine Lucy Foster, the University of Alabama System said.

Autherine Lucy Foster, the first Black student to enroll at the University of Alabama, died Wednesday. She was 92.

University officials announced her death in a statement. Her daughter, Angela Foster Dickerson, said her mother died Wednesday morning and said a family statement would be released.

Foster in 1956 briefly attended classes at the then all-white university. She was expelled three days later after her presence brought protests and threats against her life. Foster, a graduate student studying education, had faced hostile crowds hurling racially charged threats and debris.

The university later celebrated Foster’s legacy, her role in desegregating the institution and her bravery.

Her death comes less than a week after university officials dedicated the campus building where she briefly attended classes in her honor. During the ceremony, she was also proclaimed a “master teacher.”

“If I am a master teacher, what I hope I am teaching you is that love will take care of everything in our world, don’t you think,” Foster said at the dedication ceremony last week.

“It’s not your color. It’s not how bright you are. It’s how you feel about those that you deal with,” Foster said.

In 2019, she was awarded an honorary doctorate by the university, where she had returned and earned a masters degree in education in 1992.

“Dr. Foster will always be remembered as one who broke barriers, reminded us of the respect due to every individual and lived a life of strength in steadfast service to her students and community,” University President Stuart R. Bell said in a statement.

After criticism, trustees abandoned a plan for the building to also keep the name of a one-time governor who led the Ku Klux Klan and to rename it solely for Foster. Rather than Lucy-Graves Hall, the classroom building will be known as Autherine Lucy Hall, trustees decided.

Foster’s family wanted to use her maiden name since she was known as Autherine Lucy while originally on campus.

After Foster left the campus in the 1950s, African-American students did not return to the campus until 1963 when Gov. George Wallace made his infamous stand in the school house door.