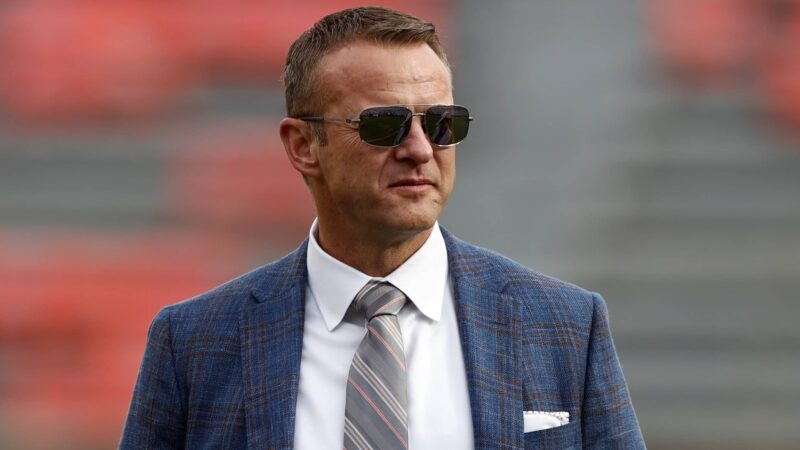 AUBURN, Ala. — Auburn fired coach Bryan Harsin on Monday after less than two seasons, ending a rocky tenure in which the Tigers struggled to compete in the Southeastern Conference.

Harsin went 9-12 overall and 3-5 this year. Auburn has lost four straight games while struggling against Power Five opponents, including a 41-27 loss to Arkansas on Oct. 29. Auburn will owe Harsin 70% of his remaining contract — more than $15 million — and half of that must be paid within 30 days.

“President (Chris) Roberts made the decision after a thorough review and evaluation of all aspects of the football program,” the school said in a brief statement announcing the move.

“Auburn will begin an immediate search for a coach that will return the Auburn program to a place where it is consistently competing at the highest levels and representing the winning tradition that is Auburn football,” the statement said.

Auburn canceled its weekly football football news conference about 90 minutes before Harsin was scheduled to speak.

Harsin was hired away from Boise State in December 2020 and Auburn gave him a six-year, $31.5 million deal. He never came close to replicating his past success and failed to keep up with rivals Georgia and Alabama on the field or on the recruiting trail.

Those results were unacceptable to a program that won a national title in 2010 and is accustomed to contending for SEC championships.

The Tigers struggled throughout the season, with the normally reliable defense giving up 40-plus points three times while the offensive issues never resolved. The biggest struggles came in the second half, when Auburn failed to score a touchdown against both Missouri and LSU.

The heat on Harsin rose after a 41-12 loss to Penn State and didn’t cool off too much after a 17-14 overtime win over Missouri. That game was only salvaged by Missouri’s goal line fumble in overtime. Then came a listless 42-10 loss to No. 1 Georgia that emphasized the talent gap facing the Tigers and losses to Mississippi and the Razorbacks.

Harsin said after the loss in Athens that he focuses on the things under his control but added that the enjoyment of coaching “never goes away.”

Auburn had a chance to take the lead in the third quarter against Arkansas, but the drive ended with a blocked field goal. The Razorbacks then scored 21 unanswered points, prompting much of Jordan-Hare Stadium to empty out.

“Obviously from the outcome of the game, nobody’s going to feel what we did was good enough,” Harsin said. “I think everyone is in there hurting, which we should be. When you lose a football game and one against a team we felt like we put a lot of preparation into preparing … we prepared ourselves, put a lot of preparation time in and wanted to play a lot better than what we did.

“So I’d say frustrated, but you’ve got to go back to work.”

Athletic director Allen Greene, who resigned in August with five months left on his initial five-year deal, made the out-of-the-box hire of a coach with no SEC background. Harsin had gone 69-19 in seven seasons at his alma matter.

Harsin survived a school investigation into his program in the offseason that was initiated by then-President Jay Gogue following heavy turnover on his roster and coaching staff. The Tigers lost their final five games in his debut season.

His first choice to replace Bobo, Austin Davis, accepted the job and then changed his mind, citing personal reasons. Auburn wound up standing by Harsin — at the time.

With all that as a backdrop, Harsin struggled to bring in top recruits. His 2023 class was ranked last in the SEC halfway through the season, according to the 247Sports composite ratings.

One former player had said Harsin treated them “like dogs,” though others rose to Harsin’s defense. The investigation ended with Gogue decrying the “wild speculation” and misinformation in the “feeding frenzy” surrounding Harsin, whose contract ran through the 2026 season. He didn’t specify the nature of that speculation.

Harsin’s tenure ended with Auburn owing another huge payout. Like his predecessor, Gus Malzahn, the amount remains the same even if Harsin accepts another job. The school paid Malzahn, now head coach at UCF, $21.5 million after his firing.