After a wave of HBCU bomb threats, a look at another era of violence at Jackson State 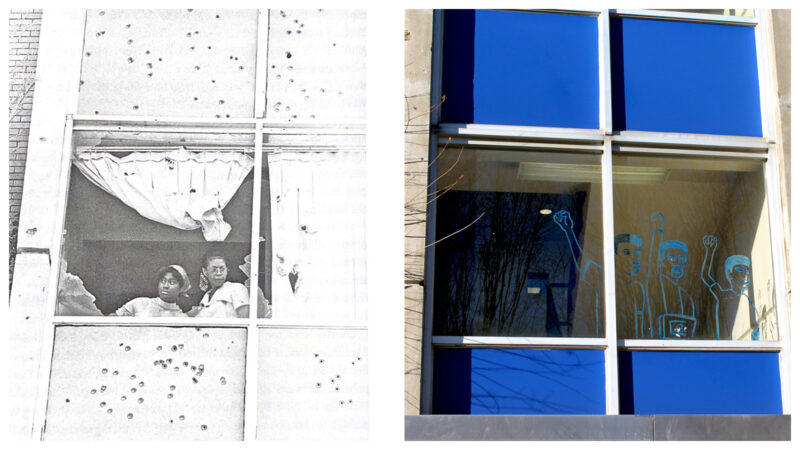 Side-by-side photos show a portion of Jackson State University's Alexander Hall. The photo on the left, taken May 15, 1970, shows the damage done by police gunfire after the Gibbs-Green Tragedy. The photo on the right shows the same area today with a mural painted on a window.

On the first day of Black History Month, more than a dozen historically Black colleges and universities across the country received bomb threats, inserting a wave of hate into a time meant for reflection and celebration.

“It’s not really surprising to me just because how many events have we seen occur in places where Black people come to gather and share camaraderie in,” Aria Brent, a senior journalism student who works as a resident assistant in Alexander Hall at Jackson State University, said.

In 1970, that residence hall was the scene of a violent and deadly attack spurred by law enforcement that left two young men dead, many others injured and campus changed forever.

The recent bomb threats at Jackson State, and at least seven other HBCUs in the Gulf States region, stirred up memories of that event, known as the Gibbs-Green tragedy.

Since the beginning of 2022, the total number of bomb threats directed at HBCUs in the U.S. surpassed 50 and the FBI is pursuing the wave as a hate crime investigation.

What led to the Gibbs-Green Tragedy

On May 14, 1970, Jackson State students were hanging out in front of Alexander Hall, then an all-girls dorm, when the Mississippi Highway Patrol and the Jackson Police Department marched on to campus just before midnight.

With the rising Black Power movement and anti-war activism, tensions had been building between Black students, white city residents and police officers for years. Alexander Hall stood right off John R. Lynch Street, which cut through the center of campus. The busy thoroughfare connected the outskirts of Jackson to the city’s downtown center, and to get there, motorists had to drive right through the HBCU campus.

“By the 1950s and ‘60s and the days of the modern civil rights movement, those white motorists would often be antagonistic to the young Black people who were walking around our campus,” Robert Luckett, a history professor at Jackson State, said. “They would shout racist epithets. They would throw things out their windows.”

In 1964, one driver hit and injured a student as she was walking on campus, and Jackson State students began protesting to have Lynch Street closed on campus. Luckett said students regularly held protests from 1964 until it all came to a head in 1970 when students began to take more direct action. On the night of the shooting, someone stole a dump truck, parked it in the middle of Lynch Street and set it on fire, Luckett said.

“It’s a pretty effective means of closing the street through campus,” Luckett said. “The fire department showed up, put the fire out. That was the end of it.”

And that was the end of it — until police officers showed up on campus later that night.

The officers were armed and fully dressed in riot gear. One person threw a glass bottle at the officers, and that’s when all hell broke loose.

The bottle broke at the officers’ feet, Luckett said, prompting police to open fire on Alexander Hall. Hundreds of rounds of ammunition were fired in seconds, completely wiping out one half of Alexander Hall, destroying windows, shattering the brick building and sending people running in panic. The gunfire left dozens of students injured, and two students killed: Phillip Gibbs, 21, a Jackson State student, and James Green, 17, a local high school student.

Mississippi State Sen. Hillman Frazier was a sophomore at Jackson State in 1970 and took political science classes with his classmate Gibbs, he said. The night of the shooting, Frazier said he was driving up to campus to drop off a friend at Alexander Hall, as the police were marching on to campus. Then, law enforcement officers stopped his vehicle and prevented him from entering.

“That’s when the shooting started,” Frazier said. “So we turned the car around and left campus just to protect the young lady and our safety. It was just a chilling night because I’m waiting for the news report of what was going on, what happened and listening for the casualties.”

After the shooting, police said they had gotten reports of a sniper in the dorm, but that was proven to be false following an investigation. No police ever faced criminal charges.

“It was unreal because I said why were they shooting because the kids were unarmed,” Frazier said. “They were hanging out as students like they do on a typical evening.”

Today, Sen. Frazier represents the Jackson area and has been a state lawmaker since the 1980s, a path that was paved on the night his classmates were the target of police violence. His office at the Mississippi Capitol is just blocks away from his alma mater.

When he was a student, he initially planned to become a political science professor, but the 1970 police shooting left him, like much of the larger Jackson community, forever changed. Soon after, he decided to go to law school to try and make a difference in his home state.

More than 50 years after the police shooting, Lynch Street no longer splices through the middle of Jackson State. Instead, it’s a closed-off plaza that winds through the heart of campus. On any given day, you’ll see students hanging out or heading to class along the brick walkway. The plaza is lined with academic and administrative buildings, Divine Nine Greek plots and dorms.

The area is now called the Gibbs-Green Memorial Plaza, in honor of the two students who were killed by police.

Alexander Hall remains in the same spot and still houses students. Today, it’s a co-ed dorm, and you can’t tell its dark and violent history just by glancing at it. But as you walk closer, you’ll notice a few items that appear to be out of place if you didn’t know the building’s history.

“They say that you can [still] see the bullet holes in the wall of Alexander Hall,” Luckett said.

Right at the entrance of the dorm, a granite structure is erected, resembling a gravesite and a tombstone. It reads, “Phillip Gibbs. James Earl Green. Martyrs of May 14, 1970.” In front of the building also stands a Mississippi Freedom Trail sign, marking the space’s historical significance in the civil rights movement and the long Black freedom struggle.

Today, countless students pass by and observe these emblems as they enter and exit the dorm, and the legacy of 1970 is present and tangible at Jackson State. Students learn about the decades-old incident in a freshman year course. This remembrance is the result of collective work done by historians, like Luckett, and the Jackson State community.

‘Looking back, they would be proud of us’

Many of the residents in Alexander Hall said they are not shocked to learn about what happened on their campus in 1970 — the same way they weren’t shocked when their university and other HBCUs across the country were targeted with bomb threats this year.

So far, the FBI has identified six persons of interest in this investigation, but no charges have been filed.

“It’s gon’ take a lot more to break us down, to scare us, to shut us down and to stop HBCUs from prospering than some bomb threats,” Brent said. “We’ve been through the actual bombings and tornadoes and fires and shootings and whatever else throughout our history. Here we are still standing.”

Brent is a native of Ohio, home of the infamous Kent State University shooting, which took place just 10 days before the Gibbs-Green Tragedy on May 4, 1970.

She first learned about the Gibbs-Green Tragedy as a high school senior when researching online about Jackson State once she made the decision to come to Mississippi for college.

“Every time you look up Jackson State or like anything within relation to it, that [history] always comes up,” Brent said.

She, like many other Jackson State students, remains resolute in their HBCU, in its tumultuous history and in its resilient presence today. Dorian Coleman, a sophomore studying criminal justice, said she also finds pride in Jackson State’s past.

Frazier is proud of what Jackson State is today as well, in the aftermath of police shootings and hate-fueled bomb threats. He said the current charge on youth is to remember the sacrifices and lives lost in the process of making today’s dreams — and future ones — possible. Most importantly, he encourages young Black people today to stay prepared to keep that dream alive.

“It’s incumbent on Black students to prepare themselves through those pressures because we have to prepare ourselves,” he said. “We’re the ones who are in the position to save this country and lead it forward.”