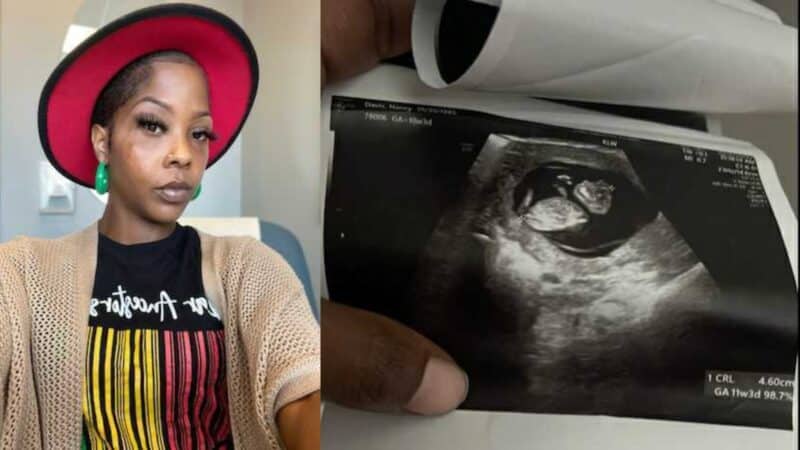 Nancy Davis, 36, left, and an ultrasound image showing her baby, who was diagnosed with acrania.

Nancy Davis, a 36-year-old Baton Rouge, Louisiana, mother of three, never expected she’d need an abortion. Nor did she expect she would ever be denied one.

But Davis is facing a new reality in Louisiana: Even the few legal abortions are hard to get in a state where that access is now in the hands of hospital administrators.

She was about 10 weeks pregnant in late July when she found out her baby was lethally ill.

A specialist at Woman’s Hospital told her the baby had acrania, a rare congenital condition in which the brain and the skull don’t fully form. In an ultrasound, you could see it: The fetus’ head wasn’t rounded, but instead almost cut off.

Babies born with acrania typically die within a week. The news left Davis and her partner — who were both excited to have another child — devastated.

“He pretty much told me I will be carrying it to bury it. Those were his exact words,” she said of the doctor who broke the news. “I immediately started crying.”

But what came next, she said, made it even worse.

Davis decided she wanted an abortion, and initially, the maternal-fetal medicine specialist at Woman’s Hospital told her he could perform an abortion. But a week later when Davis was trying to book the abortion appointment, another doctor told her that hospital leadership refused to approve the procedure.

Davis was told that the hospital and doctors had to “protect themselves” from Louisiana’s strict anti-abortion laws, and because her fetus still had a heartbeat, the hospital would not perform the abortion.

The sudden change of plans, and the reason given, made the diagnosis even harder, she said.

“It’s even more devastating,” Davis said, “Not knowing how I’m gonna get the care that I need.”

Under Louisiana’s near-total abortion ban, Davis’ abortion should have been legal. Her story has garnered local and national media attention, and it also puts a spotlight on how precarious abortion access has become even in the most extreme circumstances, now that Louisiana’s last three abortion clinics have closed and access lies solely in the hands of hospitals.

A decision by Woman’s Hospital

It remains unclear why Woman’s Hospital denied Davis an abortion.

The ban allows abortions in cases where the fetus is lethally sick. Woman’s Hospital officials said in a statement that Davis’ diagnosis of acrania qualifies under the Louisiana Department of Health’s list of medically futile conditions that allow abortions.

Two maternal-fetal medicine specialists, Dr. Cecilia Gambala of Tulane University School of Medicine and Dr. Will Williams of Ochsner Health System, said acrania is closely tied to anencephaly, a diagnosis named on the list, and also falls under the final category of any congenital or chromosomal anomaly that is incompatible with life.

The fallout from overturning Roe is just beginning.

But if you need grounding right now and an answer to how we got here, listen to Banned. All 7 episodes are out. A bonus EP is coming.

Instead, a Woman’s Hospital spokesperson said they denied Davis’ abortion because of other anti-abortion laws on the books — laws that have been piling up for decades, some of which had been blocked by federal courts before the U.S. Supreme Court overturned Roe v. Wade. But the hospital would not say which law, in particular, caused it to refuse Davis’ abortion.

“The laws addressing treatment methods are much more complex and seemingly contradictory,” Woman’s Hospital officials said in a statement. “Our team has been working diligently to gain clarity on what type of treatment and care we can provide to our patients with medically futile diagnoses while remaining in compliance with all state laws.”

The ambiguity around Davis’ case, however, highlights just how uncertain abortion access has become in Louisiana — even when the state’s near-total ban is designed explicitly to allow abortions in cases like hers.

Though these terminations are legal under the near-total ban, Louisiana hospitals aren’t required to provide abortions for medically futile pregnancies, and they have varying abortion policies.

Franciscan Missionaries of Our Lady Health System, a Catholic health system in Baton Rouge, said it complies with the Ethical and Religious Directives for Catholic Health Services. That directive bans all abortions where the “sole immediate effect is to end a pregnancy,” including medically futile pregnancy cases.

In contrast, a statement from LCMC Health, based out of New Orleans, said their providers “have always offered the clinical care necessary to end medically futile pregnancies where the congenital or chromosomal anomaly is incompatible with sustaining life after birth,” and LCMC will continue that practice as long as they comply with state laws.

Gambala, the Tulane maternal-fetal medicine specialist, said she has also previously provided abortions for patients diagnosed with lethal fetal anomalies, and she will continue to do so as long as an anomaly is outlined on LDH’s list.

A statement from Ochsner Health — the largest health system in Louisiana — said they also provide abortions for patients with medically futile pregnancies. But it’s unclear how often those abortions occur.

Williams is among a small group of physicians at Ochsner who specialize in these complicated pregnancies. Williams, who was an OBGYN resident at Ochsner from 2013 to 2017 and returned as a maternal-fetal medicine specialist in 2020, said Ochsner doesn’t routinely provide abortions for fetal anomalies.

“In general, when we make diagnoses of medically futile pregnancies, those patients historically have been cared for outside of the Ochsner system in terms of actually getting an abortion,” Williams said.

Before Louisiana banned most abortions, Ochsner patients were often referred to abortion clinics in the state, or if their pregnancies were further along, to clinics or hospitals in other states, Williams said. With Louisiana’s clinics closed and most abortions banned across the South, future access looks “very limited,” he added.

He told the story of one patient who had an abnormal ultrasound at the end of her first trimester. But it wasn’t until the middle of her pregnancy that it was clear the baby wouldn’t survive due to problems with its brain, liver and heart. The patient wanted an abortion, but she didn’t have the resources to travel out of state to get one, and Williams said he couldn’t provide her with one at Ochsner. She had to continue the pregnancy and had a stillbirth in her third trimester.

“Those were weeks and months of anxiety and uncertainty that, had she had this option for abortion, she would not have endured,” he said.

In 2020, Alexis Fabrizio Sumpter was still in her first trimester when her OBGYN at Ochsner Health said her fetus’ heartbeat was so low it could barely be measured. It wasn’t growing. It had no arms or legs, and the placenta wasn’t developing right.

But her doctor said abortion was not an option at Ochsner Health as long as cardiac activity was able to be seen.

By this point, Fabrizio Sumpter’s growing belly was already showing.

“People were asking me when I was due,” Fabrizio Sumpter said. “People were looking at my two little girls and saying, ‘Oh, are you hoping for a boy this time?’ while I was walking around week after week after week, knowing that there wasn’t going to be a baby at the end of this.”

Fabrizio Sumpter said her doctor was sympathetic and wrote down the number for a local abortion clinic, but the clinic was so busy that she eventually had to travel to Florida for the procedure.

It’s unclear how many of these kinds of abortions for lethal fetal anomalies were taking place in Louisiana hospitals prior to the U.S. Supreme Court decision in June. The health department hasn’t specifically tracked abortions performed in hospitals.

According to data, the health department collects on abortion clinics — a state requirement prior to the clinics closing — 16 pregnancies were terminated because of fetal anomalies in 2021 at Louisiana abortion clinics.

“As maternal-fetal medicine specialists, we actually see a fair number of cases. And so I can’t say it’s not common,” Gambala said. “What if that happened to you? Is that fair to say, ‘Well, sorry, it’s rare.’”

Out of options in her home state, Davis has been forced to look elsewhere. She first tried clinics in Florida and is now looking at going to a clinic in North Carolina. She launched a GoFundMe campaign to raise $20,000 for travel, care for her children, therapy and health care expenses.

Davis said she hoped to be able to have her abortion within the next few weeks.