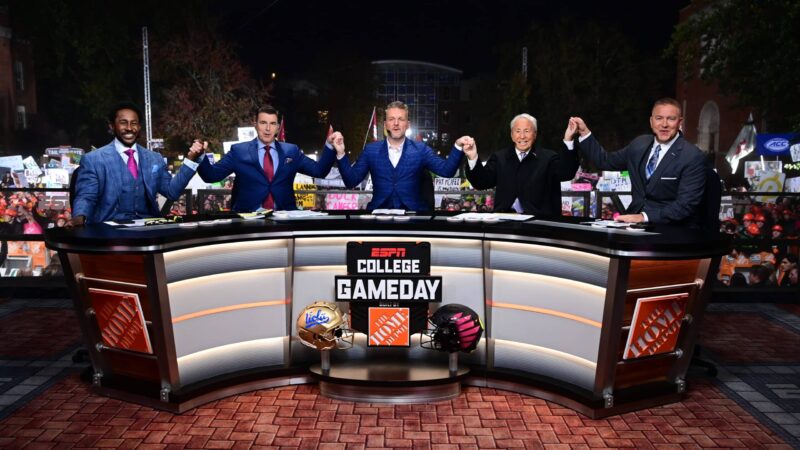 On Thursday morning, the Jackson State University football team showed up bright and early to practice at the Walter Payton Center. Temperatures swayed between the high 40s and low 50s as dozens of young men practiced drills, ran plays, and stretched under the watchful eyes of the JSU coaching staff.

While all of this may seem like a lot to deal with at 8 a.m., the team seemed energetic and excited. They’ll need all the energy they can get when they host one of their biggest rivals under the added spotlight of one of the biggest productions in college sports this Saturday.

ESPN’s College GameDay will broadcast live outside of JSU’s Mississippi Veterans Memorial Stadium ahead of the Tigers’ highly-anticipated game against the Southern University Jaguars, of Baton Rouge, Louisiana.

Every Saturday, College GameDay chooses a college football game to attend, and their cast of analysts preview the day’s games on the chosen campus with an audience cheering behind them. It will be the first time that the well-known show comes to Jackson State.

Coordinating producer Drew Gallagher says they don’t always choose the best matchup or the highest-ranked teams, but instead try to follow the best story. That certainly describes JSU and its head coach, Deion Sanders. Since Sanders took the helm in 2020, he has ushered in a new era of football at historically Black colleges and universities.

“Jackson State is one of the big stories of college football this year,” Gallagher said. “We can’t wait to be there.”

When it comes to storytelling, certain elements need to be in place for it to be a good one. Here are three key reasons why this Jackson State-Southern game fits the bill.

A good cast of characters

A good story always comes with a good cast of characters, and anyone in the football world will tell you that Sanders, also known as “Coach Prime,” is the main character in this weekend’s story.

“He loves the game of football,” Gallagher said. “Listen to how he talks to his team and the values that he preaches to them about accountability and playing for each other. He’s just an amazing character. Not to mention a college football legend, an NFL legend.”

Sanders is known for his larger-than-life presence both in front of the media and his team. At practice Thursday morning, Sanders rode in on his own golf cart with “Coach Prime” printed on the front. At his press conference this week, Sanders was asked about GameDay coming to Jackson for the first time. He said that while announcements like this come with excitement, they also come with “a level of expectation.”

“I expect stuff like this, I really do,” Sanders said. “Why not us? I really think like that… but thank God they pulled the trigger and we’re blessed to have them. It’s phenomenal.”

Another big rule of storytelling is to have a good backstory or history, and Rob Jay, JSU’s Assistant Athletic Director for Broadcasting, says this rivalry has exactly that. He would know — he does the play-by-play at Memorial Stadium for JSU football and is also an alumnus of the university.

“Both teams are just alike, they’re always winning, they’re always good,” Jay said. “When it comes to winning between Jackson State and Southern, it’s intense. It’s been like this for a long, long time.”

Coach Sanders is aware of this storied history between the two teams, and encouraged fans of both teams to show up and show out outside of Memorial Stadium.

“I need everybody there including, [Southern University fans],” Sanders said in an Instagram post he made on Wednesday. “This is a blessing [for] all of us baby. HBCUs everywhere.”

It’s just the fourth time since 2005 that College GameDay has featured an HBCU matchup, and it’s clear to see why this one was chosen. Southern leads the overall series 35-30, with the first game being played in 1929 before becoming an annual contest in 1958. Jay says there are multiple moments in the history of this matchup that he can remember — like last-second wins and the schools’ bands going back and forth.

This season, Jackson State is undefeated, and Southern is 5-2. Both teams are at the top of their respective divisions in the Southwestern Athletic Conference, giving the matchup SWAC Championship game implications.

The third element a good story needs is an interesting setting.

With Jackson, College GameDay will be coming to a city that has had its fair share of conflict the past few months, with the fight over abortion rights, flooding, water issues, and a welfare scandal all getting national attention. Gallagher says he hopes that this game can give the city some positive attention.

“This is an opportunity to show the country that there’s a lot of good happening in Jackson,” Gallagher said. “Look at this fan base. Look at these people. And look at sort of the bright light that comes from this story right now in college football.”

Finally, every good story has a good ending. And if Gallagher, Jay and the competing teams have anything to say about it, that storybook finale will surely come.

The College Gameday broadcast will last from 8-11 a.m., airing on ESPN and ESPNU and streaming on ESPN+. Kickoff for the Tigers and Jaguars is set for 1 p.m, and the game will also be streamed on ESPN+.