The 2021 moments that will stick with us: Reflections from the Gulf States Newsroom 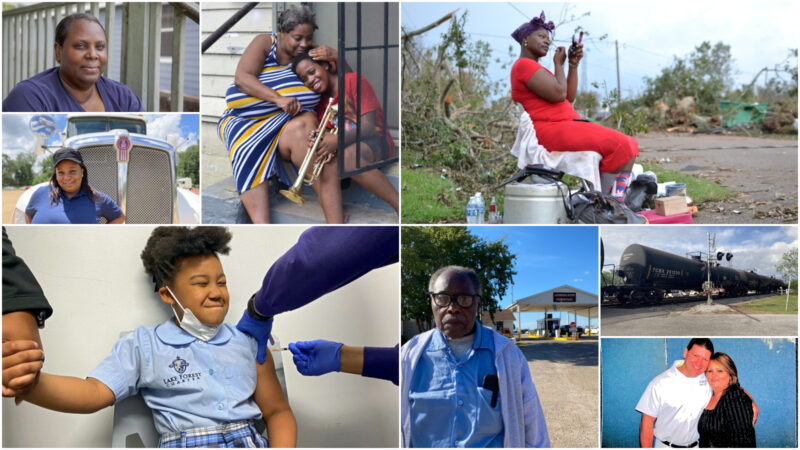 Too many local news outlets have disappeared in Louisiana, Alabama and Mississippi. This year, the Gulf States Newsroom stepped in to fill in those gaps. WBHM in Alabama, Mississippi Public Broadcasting, WWNO and WRKF in Louisiana and NPR are working together as a regional newsroom to plan coverage, share resources and add reporting power in a story-rich region that has for too long gone under-covered. Our growing team of reporters have been traveling across the states covering important stories related to health care, criminal justice, the economy and racial equity.

Here are some of the moments from 2021 that our reporters say they will always remember (even if the tape didn’t always make it into the story):

A song in the storm

I’ve been reporting on COVID-19 and the impacts on our region all year. I cover everything from mask mandates to low vaccination rates and variant surges. But I also cover major breaking news events like Hurricane Ida, the category 4 storm that hit Louisiana at the end of August. One of my favorite stories is from walking around New Orleans with my colleague Tegan Wendland and talking to people about what they’d been through. We spoke to a woman named Shameka Joseph, who sang a song that her son had written about her. It’s about how she’s been through so much loss and survived it.

I never been through a storm

I never been through a hurricane

Never been through life

But my mom has been through it all

I love this tape because it’s personal and emotional and puts a human voice on tragedies that are often hard to comprehend. Unfortunately, the COVID-19 pandemic isn’t over and neither are events like Ida that knock us off our feet. But I’m excited to keep showcasing stories about people who are rising above it all and surviving.

The beauty of talking to strangers

In late April, I took my first reporting trip across the region, covering the effort to establish a new Amtrak line between Mobile, Alabama and New Orleans. I was in Bay St. Louis, this town along the Mississippi coast, and I ran into Wendy Hayden.  She was so excited about the train coming and we had this great conversation. As things were wrapping up, her phone started to ring and she said, “I think I’m about to be a grandma.” And on the other side of this phone screen was her daughter and her brand new granddaughter, just born.

This moment had nothing to do with the story about the Amtrak train potentially coming through, but it did really stick with me for just her reaction and the excitement in her voice. It’s something I thought about for a long time after. It also really reminded me of the value of getting to talk with strangers in person, getting to run into Wendy and experience this moment with her. And that’s something I’m really looking forward to cautiously doing more of in 2022.

In October, I was reporting a story about 10-6 lifers, men who were incarcerated for roughly 50 years, even though they were offered a sentence that was about ten years and six months. I sat in on a class where a bunch of men who had been released recently were learning how to use their cell phones — specifically, they were learning how to use Facebook. And these guys had all pretty much been in the same dorm at Angola prison in Louisiana and so they had a great rapport.

There was this really funny moment when a student from LSU, who was working with them, asked Lewis Mitchell, who was a bodybuilder in prison and the most gregarious out of the group, if he saw that his friend, Kenneth Womack, had updated his Facebook photo. He said, “Yeah, he’s just ugly,” which made everybody laugh. And he said he was going to keep his phone by his bedside with his picture so that he could keep the roaches away. And Kenneth is kind of shy, but you can hear him kind of chuckling underneath, because that’s the relationship that they had. What stuck out to me is in the Deep South there are so many people who are incarcerated and we forget about them. And these guys were literally called the forgotten men. I was just really touched by how they were approaching their release and how they were learning this technology and looking forward to spending their last days with their families and extended families that had grown so much while they were incarcerated.

A prison visit at the beach

In December, I was reporting on the impacts of the halting of prison visitation for incarcerated people and their loved ones during the pandemic. I drove down to Dothan, Alabama to meet with Virginia McDaniel. Her husband is in prison and she hadn’t seen him in-person for almost two years because of Alabama’s policies. In the midst of the interview, she told me about this one time where she took her husband to the beach. She drove down to Panama City Beach, set up the tablet so he could look out at the ocean. And he was able to see it and sort of be there in a virtual way for just that moment.

I love this story because it shows how dedicated and caring she is to her incarcerated husband. Next year, I look forward to continuing to connect with those who are most impacted by the criminal justice system and uplifting their experiences through reporting.

This story was produced by the Gulf States Newsroom, a collaboration among Mississippi Public Broadcasting, WBHM in Birmingham, Alabama, WWNO and WRKF in New Orleans and NPR.