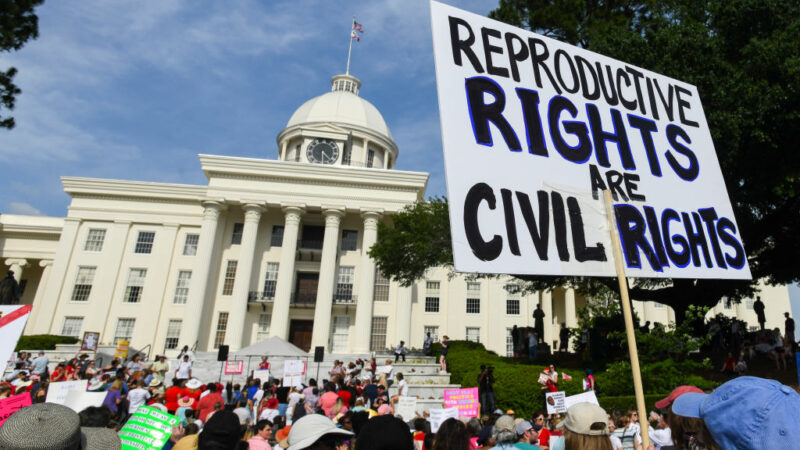 MONTGOMERY, AL - Protestors participate in a rally against one of the nation's most restrictive bans on abortions on May 19, 2019 in Montgomery, Alabama. Demonstrators gathered to protest HB 314, a bill passed by the Alabama Legislature last week making almost all abortion procedures illegal.

MONTGOMERY, Ala. (AP) — A group of Alabama lawmakers have proposed legislation similar to a Texas law that would ban most abortions and allow anyone to file civil lawsuits against violators and collect damages.

Alabama is the latest GOP-led state to see lawmakers propose legislation to mimic the Texas law and its novel citizen-enforcement provision.

The U.S. Supreme Court on Friday left in place Texas’ ban on most abortions but said providers could sue to challenge the ban. A Texas judge on Thursday ruled the citizen enforcement mechanism is unconstitutional but left the near-total ban on abortions in place.

The bill titled the “Alabama Heartbeat Act” was filed ahead of the 2022 legislative session. It would prohibit medical providers from performing an abortion once cardiac activity is detected, usually around six weeks and before some women know they are even pregnant.

The measure would allow private citizens to file civil lawsuits against anyone who “aids or abets” an abortion and to collect at least $10,000 in damages for each performed abortion.

Providers in Texas say abortions have become virtually inaccessible since the law was signed.

Republican Rep. Jamie Kiel of Russellville, the primary sponsor of the legislation, said the bill mirrors the Texas law, noting that it has not been struck down yet.

“A recent (National Public Radio) article reported that in the 101 days since the law was enacted, 75-100 babies are now being saved every day in Texas. That’s what I want for Alabama. To protect the right to life of the 16 babies who are murdered here daily,” Kiel said.

Twenty-three Republicans in the 105-member House of Representatives have signed on as sponsors of the bill.

Kaitlin Welborn, a reproductive rights attorney with the American Civil Liberties Union of Alabama, urged lawmakers to reject the proposal and said it will be quickly challenged if it passes.

“Alabama legislators have filed a bill that bans abortion at 6 weeks of pregnancy and pits neighbor against neighbor in an illegal bounty-hunting scheme. HB 23 mirrors the anti-abortion legislation that most recently passed in Texas, even though their abortion ban is deeply unpopular and blatantly unconstitutional,” Welborn said in a statement.

Alabama Gov. Kay Ivey in 2019 signed into law a near-total ban on abortion in the state, with no exceptions for rape and incest, but the law was blocked from taking effect by a federal judge.

The legislative session begins on Jan. 11.