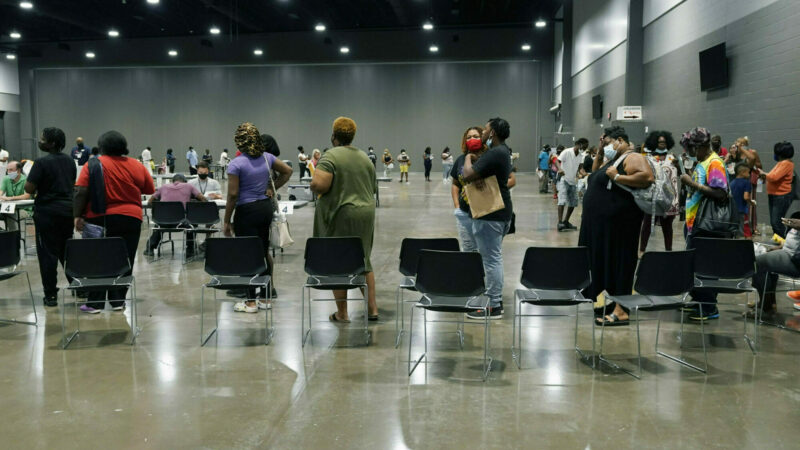 In this file photo, applicants at a rental assistance fair for Jackson residents at the Mississippi Trademart, line up to be assigned the proper station in the state Fairgrounds, Saturday, July 24, 2021, in Jackson, Mississippi. (AP Photo/Rogelio V. Solis, File)

The good news: Mississippi, Alabama and Louisiana still have $910 million to cover rent for people who have fallen on hard times because of the coronavirus pandemic, thanks to the federal Emergency Rental Assistance Program.

The bad news: A lack of experience running large-scale rental assistance programs, coupled with long lists of required documents keeping potential beneficiaries from finishing applications, has slowed the distribution of those funds to the tenants that need it.

The slowdown comes at a difficult time for renters in the Gulf South, who are now facing a slow, but steady, rise in evictions after the Centers for Disease Control and Prevention’s moratorium ended in late August.

Further problems have been caused by some landlords being unwilling to work with state-run programs due to past payment delays, or preferring to wait and see what happens first — the funds finally being sent out by the state, or successful evictions.

Housing experts warned of a seemingly inevitable eviction spike after the CDC’s eviction moratorium. But while numbers are rising, the surge hasn’t matched those early concerns.

Data on evictions are notoriously bad, but the little that’s out there has confirmed the rise. In New Orleans, 125 evictions were filed in the first full week of October, the highest number in nearly a year.

“We’ve seen a slight increase at this point,” said Sam Buchanan, executive director of the Mississippi Center for Legal Services. “The courts are respecting, for lack of a better word, the fact that [tenants have] applied for funds and allowing an opportunity for that process to hopefully avoid the eviction itself.”

Part of the reason for the slow rise is that the CDC’s eviction moratorium never put a full stop to evictions. The moratorium prevented landlords from evicting tenants over late rent, but landlords could still evict people for violating other parts of the lease. It also lasted nearly a full year, giving landlords another option beyond eviction — not renewing the lease.

But while evictions haven’t risen to the extent housing advocates feared, legal aid offices across the Gulf South have steadily been getting more calls from people looking for help avoiding being kicked out of their homes. It’s even spilled over to offices that don’t traditionally handle eviction cases, such as the Fair Housing Center of Northern Alabama, which normally deals with cases of housing discrimination.

Skinner’s niece applied a few days earlier, but she’s also stuck waiting on a review without any further explanation from the state. Both live in the Mississippi Delta’s Bolivar County, where 35% of the population lives beneath the poverty line.

“We filled out the application. We got all the documents. What more do y’all want from us?” Skinner said. “Half of us [are] on Social Security — we don’t get that much money. We need some help in Bolivar County.”

Skinner’s issues point to the little experience Southern states have running such a large-scale rental assistance program, which has clogged up the relief pipeline. But these programs have had problems across the country, not just in the South, since the start.

States have been quick to blame the Treasury Department for providing little guidelines for how to give out the aid. That lack of guidance was part of the reason states created stringent requirements for the program in an attempt to avoid fraud and getting punished for mismanaging federal funds.

But experts say that requiring lots of paperwork — things like notices of late payment, income verification, government IDs and more — can be barriers keeping people from finishing applications.

Representatives from the Alabama Housing Finance Authority were criticized for this by state senators during a legislative oversight hearing in September.

“I don’t think it needs to be this hard,” said Eva Rosen, an assistant professor at Georgetown University’s McCourt School of Public Policy. “I’m much more concerned about getting the rental assistance out into tenants’ hands and then into landlords’ hands so that we can actually prevent evictions than I am in some small amount of fraud.”

Skinner said her landlord in Bolivar County has been willing to wait for the rental assistance money, but only for so long.

“She’s trying to be patient,” Skinner said. “But you know she wants her money.”

Landlords have also been a source of trouble for tenants seeking aid.

In Louisiana, some have denied the payments because they don’t want to agree to certain program rules — like one that prevents them from evicting tenants for several months after accepting the aid. Tammy Esponge, executive director for the Apartment Association of Greater New Orleans, said that issue was one of the biggest complaints she heard from landlords across the state.

Politics have also polarized the program for some landlords, causing some to not cooperate or even refuse to take the money. One lawyer mentioned a case where the landlord turned the money down because he thought it was communist.

Alabama lawyer Sarah Taggart represented a landlord who refused to let the program write him a check because he didn’t want money from the Biden Administration, despite the program getting passed at the end of Donald Trump’s presidential term. The landlord eventually agreed to take the money directly from the tenant.

But Taggart says situations like that are rare — it’s much more common for landlords to just not trust specific programs, like the one run by Alabama. Her clients said they’d be happy to work with some city programs known for getting money out quickly and efficiently, like Huntsville and Mobile County. But the state program’s reputation for being slow and laborious has the same landlords saying they’re not interested.

“I’d like to say that that’s illogical, but I’ve been dealing with those programs and you never know when you’re going to get paid,” Taggart said. “You can never get someone on the phone. I once got two checks for the same tenant for the same program, which made no sense.”

State programs have improved a lot since they first started — the feds loosened their rules for giving out the cash and the money’s and that’s speeding up the money flow. Alabama’s also bumping some people to the front of the aid line if they’re facing an eviction court hearing.