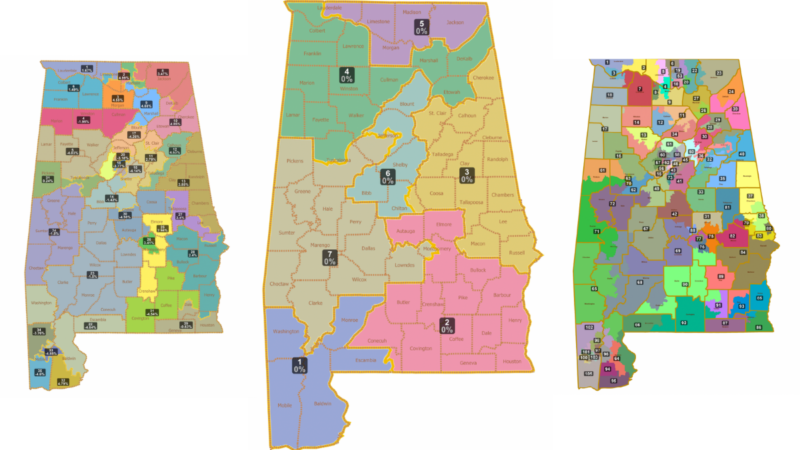 These redistricting maps were finalized during the 2021 special legislative session. The state Senate map is far left, the congressional district map is in the center, and the state House map is on the right.

MONTGOMERY, Ala. (AP) — A pair of lawsuits announced Monday are challenging Alabama’s new congressional and legislative districts as racially gerrymandered to diminish the voting power of Black and minority voters.

The lawsuits argue the new districts unlawfully pack Black voters into a small number of districts — limiting their ability to influence elections outside those districts — and break up minority communities elsewhere in the state. The cases were brought on behalf of Greater Birmingham Ministries, Alabama State Conference of the NAACP, and several individuals who are being represented by advocacy groups.

“What Alabama is attempting to do here is not only wrong and undemocratic. It’s also a clear extension of a sadly consistent pattern in Alabama history in which lawmakers and powerbrokers use cynical measures in an attempt to marginalize Black and brown communities,” said Deuel Ross, Senior Counsel for NAACP Legal Defense and Educational Fund, Inc.

The lawsuits are asking federal judges to block the maps from being used in the 2022 elections.

Republican Rep. Chris Pringle, the co-chair of the legislative redistricting committee, said Monday evening that he had just heard of the lawsuits and could not comment.

The new districts are expected to maintain the lopsided Republican majority in the Alabama Legislature and the congressional delegation. The seven-member congressional delegation consists of six Republicans elected from heavily white districts and one Democrat elected from the only majority-Black district. About 26% of Alabama’s population is Black, and some lawmakers argued the state should have a second congressional district with a significant African-American population.

During the recent special session, Republicans voted down Democratic efforts to create one swing congressional district centered in Birmingham that would be competitive between Republicans and Democrats.

“The State of Alabama carries a sordid record of using racial discrimination to maintain the political power of its white citizens,” one of the new lawsuits stated. “While Alabama’s elected officials have made important changes over the past fifty years — mostly as a result of court orders or U.S. Department of Justice intervention — Defendants continue to run afoul of the law when it comes to redistricting.”

The GOP-controlled Legislature in 2017 had to redraw legislative maps under court order to fix racial gerrymandering in 12 districts. The ruling came after Black lawmakers filed a similar lawsuit challenging the maps as “stacking and packing” Black voters into designated districts to make neighboring districts whiter and more likely to elect conservative Republicans.

Editor’s Note: For 25 years, WBHM served as a food collection site during the holiday season for Greater Birmingham Ministries.