JeffCo considers kicking in $500K to bring USFL to Birmingham 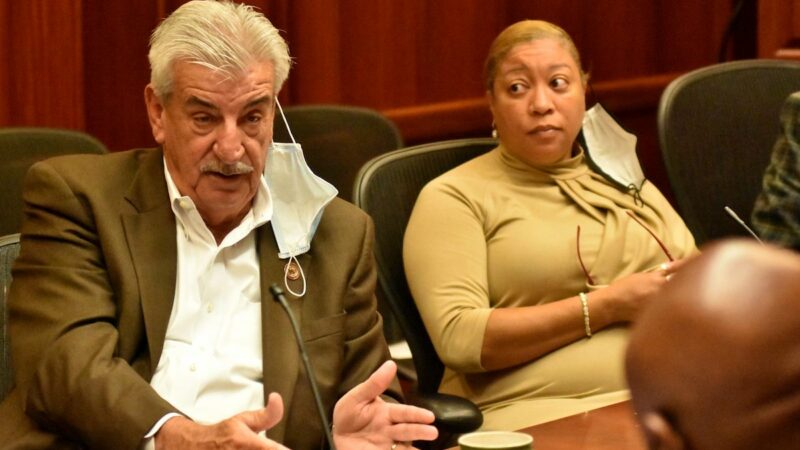 Jefferson County commissioners Joe Knight and Lashunda Scales in the meeting on Nov. 2.

Commissioner Joe Knight presented a resolution on Tuesday for Jefferson County to contribute $500,000 to help bring the United States Football League to Birmingham.

The resolution was moved to the agenda of Thursday’s commission meeting and will be considered for passage at that time.

Knight, who also sits on the board of the Greater Birmingham Convention and Visitors Bureau, said the bureau has approved paying $2 million for the USFL project. The city of Birmingham is matching the $500,000 that the county could provide.

The pledged funds will pay for people to open and run the stadium.

“There will be eight teams and all the games will be played here at Protective Stadium,” Knight said, adding later that a potential conflict with World Games could move the title game to Legion Field. “There will be guaranteed 30-second commercial slots for the stakeholders. It’s an opportunity to shine a light on us again and shine a light on us in a positive manner. We’re in a position to really showcase Jefferson County and Birmingham.”

New Districts to Be Considered Thursday

Commissioners also moved to the agenda the three redistricting plans that will be considered following public hearings on Thursday. The three plans were presented during the Oct. 5 committee meeting and have been available for public review since then at the Office of the Board of Registrars at the Jefferson County Courthouse, Room A-410.

Knight also presented a form from the county’s Emergency Management Agency that laid out the disaster declaration process from the flooding that swept across the county on Oct. 5. Unlike the destruction of recent tornadoes, the needed threshold of uninsured losses was met for the Federal Emergency Management Agency to come in with assistance of $2.76 million in Jefferson County and $8.2 million across the state.

“[EMA] jumped on it quickly and they have been working diligently,” Knight said. “The last 30 days they worked very hard to accumulate the data needed. FEMA will be here, later this week or early next week.” 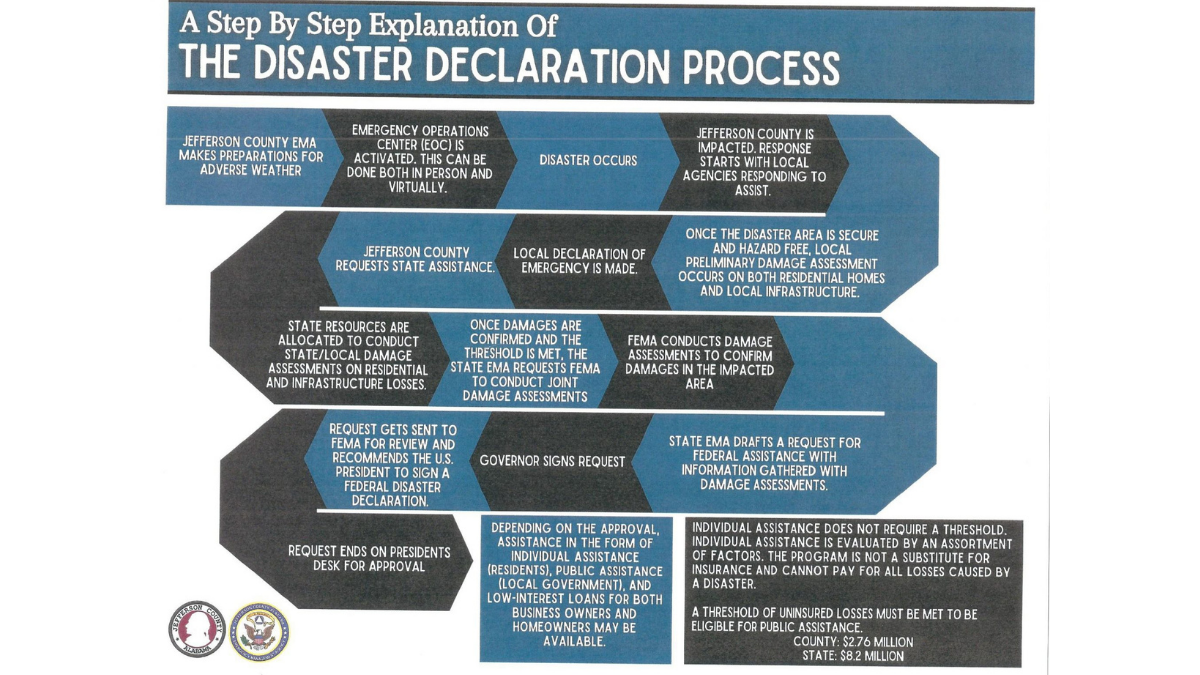 “This disaster was not like what we usually see in a tornado where you can drive around and you can see the damage,” Knight said. “On a flood, by the time you get out there and look, the water’s receded, the damages had been done. What they did is develop a portal whereby the public could sign in, register, and tell them about the damages at their house to be investigated.”

To date, 565 people registered in the portal.

Commissioners moved to Thursday’s agenda a pair of resolutions that update the Emergency Rental Assistance Program that includes the possibility of direct payments to tenants. Commissioners wondered if the county might be on the hook if a tenant did not pay the outstanding rent with the money.

“If we give the money to the tenant and they don’t do what they’re supposed to do, then is the county liable for paying those funds back?” recounted Frederick Hamilton, director of community and economic development. “That’s what they’re asking. We’re following the guidelines of the federal government so I’ve got to get clarity on what would happen if we gave a tenant money, and they didn’t pay the landlord.”

Commissioners also moved to Thursday’s agenda a resolution authorizing refunds that don’t exceed $1,500 to customers because of an overpayment or incorrect payment on an account.

“It’s just to streamline our process,” said David Denard, director of Environmental Services. “Right now, we have the process where it has to go back to the commission to get approved, so it can take a couple of weeks for us to get refunds back to our customers. This just streamlines that process and allows us to get refunds back to customers quickly, especially when they need the money.”