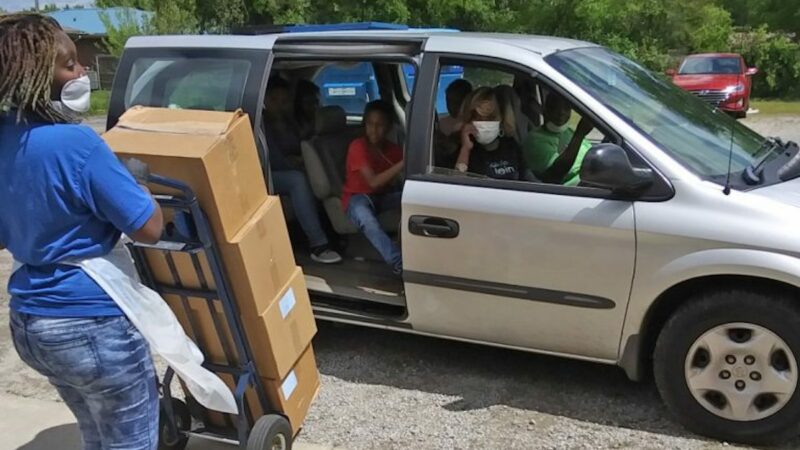 A worker at Project Hopewell wheels food out to members of the community.

Ava Wise was thinking first of others as she considered what would have happened if the federal Paycheck Protection Program had not provided her employer with money to pay her during the height of the coronavirus pandemic.

“We may not have been open to serve people,” said Wise, director of Project Hopewell, a nonprofit formed under Hopewell Baptist Church in Birmingham’s Hillman Station Neighborhood.

Effects of the COVID-19 relief program hit close to home for Wise and others who benefited from federal relief money that was paid to businesses, state and local governments, and churches and other organizations.

Without the payroll assistance, she said, “We can’t pay our bills. We can’t buy food. It cuts off our livelihood.”

Many families saw their incomes decline during the pandemic as businesses, churches, government agencies and other organizations closed or reduced their operations because of the spread of COVID-19. Some parents had to reduce work hours to provide child care as schools switched from classrooms to virtual learning.

Unemployment insurance filled some of the gap for some families, but not all. Family spending had to be trimmed in many cases to the bare necessities, which meant reducing or ending optional expenditures. Among the latter were contributions to religious organizations.

Although it is unusual for churches, synagogues, mosques and groups with religious affiliations to receive taxpayer money, many were awarded federal stimulus funds during the pandemic.

While churches may be tax-exempt, their employees pay taxes to city, state, and federal governments. The U.S. Small Business Administration’s PPP was designed to cover the payrolls of recipients.

A review by BirminghamWatch of federal records listed about 321 applicants from Jefferson County that identified themselves as religious organizations received millions of dollars under the PPP.

Records covering the period of April 2020 to May 2021 showed loans totaling $39.7 million to these groups. That is a snapshot of a portion of the PPP activity. Loans continued to be approved past that period.

In almost all instances, the amount listed for a particular organization represents 2.5 months of that organization’s salaries. Most loans were forgiven and did not need to be repaid.

Amounts ranged from $3.1 million to the Catholic Diocese of Birmingham, with 496 jobs, to $1,000 to Hopewell Missionary Baptist Church in Wylam, with seven jobs. (Jefferson County has more than one Baptist church with the name Hopewell.)

“It kept our schools open,” said Donald Carson, director of communications for the Catholic diocese. “One hundred percent went to salaries. When people are laid off, paying tuition falls in importance” compared to putting food on the table or keeping the lights on.

The Alabama Baptist Children’s Homes and Family Ministries received $1.45 million in PPP funds that preserved 129 jobs, according to a statement from Rod Marshall, president and chief executive officer.

“These funds were used to pay our direct care and supporting staff as they continued to serve the individuals in our care throughout the Covid-19 crisis … without layoffs or furloughs of our employees,” said Marshall. “We serve through seven Children’s Homes locations and over 40 counseling offices across Alabama. In 2020 we were able to help a total of 4,443 children and families statewide through Pathways Professional Counseling, Foster Care, Campus and Shelter Care, Family Care, College Care, Family Aid and aid to children when one or both parents die.”

Hopewell Baptist-Hillman Station received $39,000 in PPP money, listing two jobs with salaries to be covered, according to federal records.

The church’s pastor, the Rev. Edward B. Rogers, called the federal relief money a blessing to the ministry of Project Hopewell, which has been operational since 2002 and stretches beyond Birmingham.

“We’re taking a shipment [of food] to New Orleans for churches to distribute [to people affected by Hurricane Ida],” Rogers said. “We do a lot of outreach. I wish we could do more.”

BIS President Emeritus Aahfaq Taufique said the PPP money was “vital to our organization and went 100% to salaries. We had no layoffs and were able to pay the power bill.”

Besides the center in Hoover, the Islamic Society has two other locations under its umbrella, a mosque in Fairfield and another in Homewood, which includes the K-12 Homewood Islamic School.

Although overall donations declined during the worst of the pandemic, Taufique and treasurer Amin Binjazia said that “a lot of our donations from businesses have picked up.”

The Ninth District of the African Methodist Episcopal Church managed to retain its five employees and pay installments on a copier agreement that preceded the pandemic, said the organization’s comptroller, the Rev. Brian Blackwell. The district, although based in Birmingham, is the headquarters for 244 AME churches. It received $49,545 in PPP funds.

“A lot of our churches’ offerings declined [during the pandemic], and this allowed us to keep functioning,” said Blackwell.