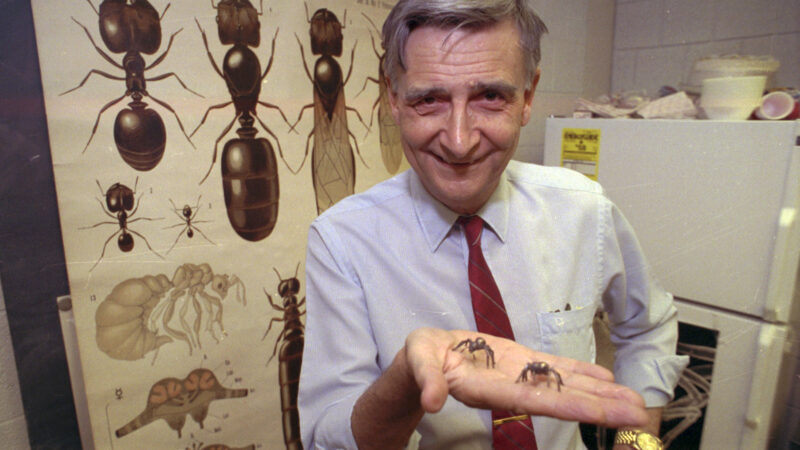 FILE - Edward O. Wilson, co-author of "The Ants," which won the Pulitzer Prize for general non-fiction, poses for a portrait on June 10, 1991. Wilson, the pioneering biologist who argued for a new vision of human nature in “Sociobiology” and warned against the decline of ecosystems, died on Sunday, Dec. 26, 2021. He was 92.

BOSTON (AP) — Edward O. Wilson, the pioneering Harvard biologist who advanced the provocative theory that human behavior such as war and altruism has a genetic basis and warned against the decline of ecosystems, has died. He was 92.

Wilson was “called ‘Darwin’s natural heir,’ and was known affectionately as ‘the ant man’ for his pioneering work as an entomologist,” according to an announcement posted Monday on the E.O. Wilson Biodiversity Foundation’s website. He died on Dec. 26 in Burlington, Massachusetts.

“It would be hard to understate Ed’s scientific achievements, but his impact extends to every facet of society. He was a true visionary with a unique ability to inspire and galvanize. He articulated, perhaps better than anyone, what it means to be human,” David J. Prend, chairman of the board of E.O. Wilson Biodiversity Foundation, said in a statement.

The professor and two-time Pulitzer Prize-winning author first gained widespread attention for his 1975 book, “Sociobiology: The New Synthesis,” in which he spelled out the evidence suggesting a link between human behavior and genetics. The work created a storm of controversy among activists and fellow academics who equated sociobiology’s groundbreaking theories with sexism, racism and Nazism.

More recently, Wilson has championed the importance of preserving diverse species and ecosystems. “The diversity of life on Earth is far greater than even most biologists recognize,” he said in 1993.

Less than 10% of the Earth’s species have scientific names, he said, making it “a still mostly unexplored planet.”

In 1979, “On Human Nature” — the third volume in a series including “The Insect Societies” and “Sociobiology” — earned Wilson his first Pulitzer Prize. His second Pulitzer came in 1991 with “The Ants,” which Wilson co-wrote with Harvard colleague Bert Holldobler.

Among his other honors was the 1990 Crafoord Prize in biosciences from the Royal Swedish Academy of Sciences, the highest scientific award in the field. Time magazine named him one of America’s 25 most influential people in 1996. 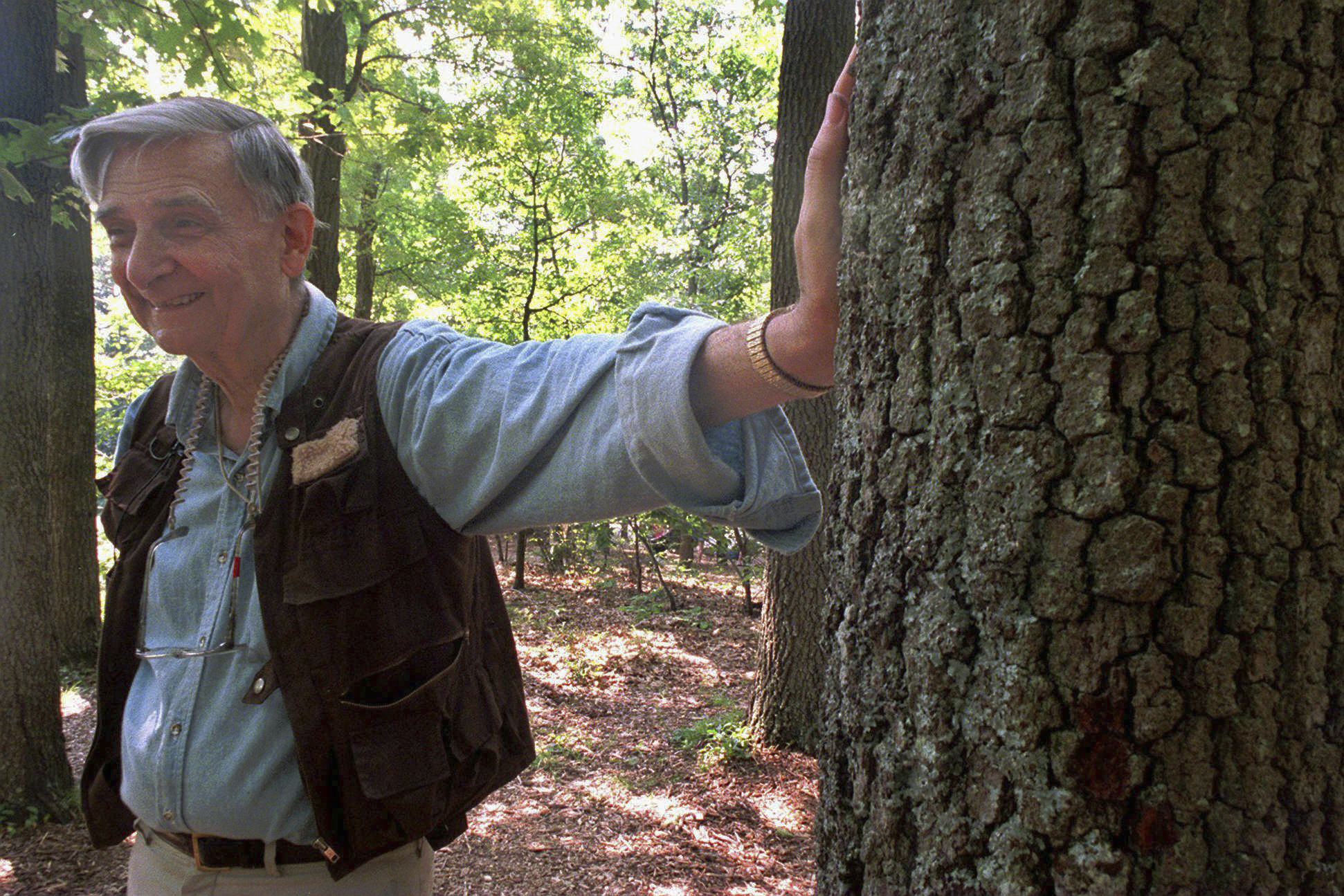 Thomas James Hurst,The Boston Globe via AP
FILE – Harvard University professor and Pulitzer Prize winner Edward O. Wilson takes a break from searching for insects in the Walden Pond State Reservation in Concord, Mass., Saturday, July 4, 1998, during a 24-hour biodiversity marathon. Wilson, the pioneering biologist who argued for a new vision of human nature in “Sociobiology” and warned against the decline of ecosystems, died on Sunday, Dec. 26, 2021. He was 92.

Wilson’s sociobiology theories transformed the field of biology and reignited the nature vs. nurture debate among scientists. Based on data about many species, Wilson argued that social behaviors from warfare to altruism had a genetic basis, an idea that contradicted the prevailing view that cultural and environmental factors determined human behavior.

Critics argued that such a theory bolstered social injustice, including discrimination against women, by saying that the inequality is written in human genes. Fifteen Boston-area scholars joined in a letter denouncing it, and in one case protesters dumped a pitcher of ice water on Wilson’s head while he was speaking at a scientific meeting in 1978.

He didn’t think genes determine all human behavior, but “in rough terms … maybe 10 percent” of it. He said later that the intensity of the reaction frightened him and for a time he gave up giving public lectures.

“I thought my career was going up in flames,” he said.

His 2006 book, “The Creation,” argued that the fields of science and religion, “the most powerful social forces on Earth,” should work together for protection of nature.

The following year, he joined with more than two dozen other leaders in religion and science in signing a statement calling for urgent changes in values, lifestyles and public policies to avert disastrous climate change. Among the religious leaders taking part were the Rev. Rich Cizik, public policy director for the National Association of Evangelicals.

The launching point for Wilson’s studies was a creature that had fascinated him since his teens — the ant.

Showing an Associated Press reporter a dramatic microscopic view of an ant specimen in 1993, he commented, “I call it looking in the face of creation. You’re looking at something that may be a million years old, and nobody’s seen it before.”

His and Holldobler’s book “The Ants” featured detailed photographs of ants crawling through their daily lives, copulating, regurgitating food, and stinging to death other insects. It meticulously detailed the ants’ every move.

He noted that the study of ants offered insights into the state of the environment, because the welfare and diversity of ant populations might be useful as an indicator of subtle destructive changes in a seemingly normal area.

Wilson was born in 1929 in Birmingham, Alabama. As an only child whose parents divorced when he was 7, Wilson found comfort in nature, which he called his “companion of choice.”

He also had to deal with the loss of sight in one eye in a fishing accident and, in his teens, a partial hearing loss.

The Boy Scouts provided Wilson an opportunity to further his enthusiasm for nature, and by the age of 15, Wilson had risen to the rank of Eagle Scout.

He graduated from the University of Alabama in 1949. He received his Ph.D. in biology from Harvard in 1955 and became an assistant professor there in 1956. Wilson’s field research included stops in Australia, New Guinea and Sri Lanka, in addition to his ongoing work at home.

While living in Mobile, Alabama, Wilson is credited with becoming the first person to identify invasive fire ants that had arrived from South America on ships. Later, as a student at the University of Alabama, he detailed that the ants were spreading rapidly across the South.

“I believe I was the first to find that ant in the U.S., certainly the first to study it in any detail,” Wilson told American Entomologist in 2014.

He sat on the boards of directors of several environmental organizations, including The Nature Conservancy. He was honored for his conservation efforts with the Gold Medal of the Worldwide Fund for Nature in 1990 and the Audubon Medal of the National Audubon Society in 1995.

Wilson is survived by his daughter, Catherine. He was predeceased by his wife, Irene.

Wilson spoke with WBHM in an interview in 2014.