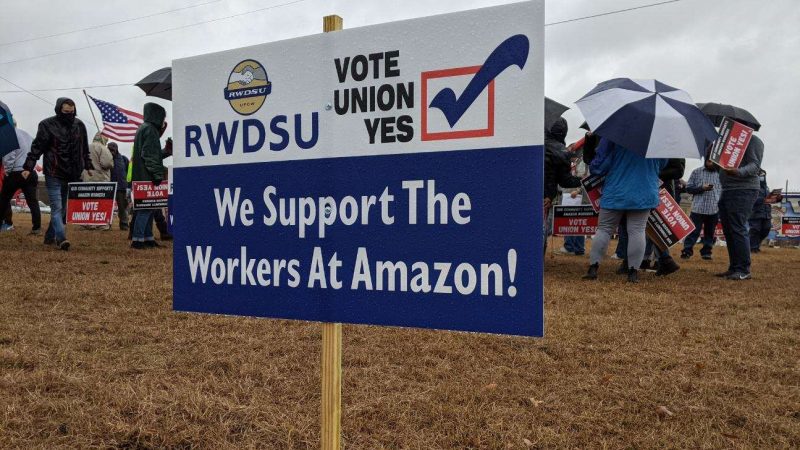 A pro-union rally near the Amazon warehouse in Bessemer drew dozens of people, many of them from other labor unions.

Dozens of union supporters rallied in the cold rain near the Amazon warehouse in Bessemer Saturday.

Starting Monday, some 5,800 Amazon employees will vote by mail on whether to join the Retail, Wholesale and Department Store Union. Voting will run through March 29.

Amazon has consistently fought efforts to unionize. Just Friday, the National Labor Relations Board denied Amazon’s request to postpone the election and consider in-person voting instead. It’s a high-stakes labor battle for Amazon. If workers vote yes, the Bessemer warehouse would be the first Amazon facility in the U.S. to unionize.

Jennifer Bates works at the Bessemer fulfillment center and spoke at Saturday’s rally in support of the union.

“It’s our time, not just here in Alabama, in the city of Bessemer, in all of the United States,” Bates said. “It’s time for us to take a stand and it’s time for us to speak out for unfair wages, unfair dignity.

At Saturday’s Bessemer rally, there was a strong showing from other labor unions, including the Communications Workers of America. Monday kicks off the first Amazon warehouse union vote since 2014, when a group of technicians in Delaware voted against unionization.

RWDSU President Stuart Appelbaum told NPR the Bessemer employees reached out to the retail union during the summer. They want more say in how they work, get disciplined, or get fired. They also complained of grueling productivity requirements.

Union workers around the region, including from poultry plants, have rallied in support of the Amazon unionization efforts. According to the union, more than half of Amazon staff at the Bessemer warehouse signed cards indicating they want a union shop.

“The thing that is most important for them is to be treated with respect,” Appelbaum told NPR. “I also think that the facility was new and I think people had expectations when they came in that were not being realized.”

Amazon officials say the union push doesn’t represent most employees. “Our employees choose to work at Amazon because we offer some of the best jobs available everywhere we hire,” a representative told NPR.