Mississippi Department of Corrections staff were out in the Walmart parking lot in Pearl, Miss. working to try and hire people to work as correctional officers, March 13, 2021.

As shoppers file out of a Walmart in Pearl, Miss. on a busy Saturday in March, they cross paths with some unlikely recruiters. This parking lot, and lots of others around Mississippi, is the headquarters for a hiring blitz by the Mississippi Department of Corrections. Through outreach events like these, the department is trying to fill 700 correctional officer positions by this summer.

“It’s really not a job you want to start out and be afraid of,” said Charles Krook, who started out working in the prison as a correctional officer, before working his way up into the probation and parole office. “If you’re afraid, you know, don’t come here, because we need somebody with heart.”

As people approached the table in the parking lot, Krook tried to give applicants a realistic picture of what the job is like, answering questions about pay and environment.

Like many states in the region and across the country, Mississippi prisons are understaffed and under-resourced, resulting in dangerous conditions for prisoners and guards.

This recruitment plan was hatched by MDOC Commissioner Burl Cain and he said “it’s got to work.” Mississippi is under investigation by the U.S. Department of Justice for prison conditions and release practices, and filling these positions is an important part of Cain’s plan to “keep the Justice Department at bay.”

From danger to pay to reputation, there are a lot of reasons that filling these positions is such a challenge.

The Risks Of The Work

Correctional officers have one of the highest rates of injury and illness of all occupations, according to the Bureau of Labor Statistics. When prisons are short-staffed, it can make an already dangerous job even worse.

“You cannot even keep an eye on people in their cages, which means that suicides will go up,” said Brock Boone, a staff attorney with the Southern Poverty Law Center. “And it’s compounded by not having mental health staff, mental health appointments or any mental health care for that matter.”

The SPLC sued Alabama over conditions in prisons and the lack of staff available to care for inmates, and is now trying to get the state to comply with the remedial court order to fill vacancies.

Alabama and Louisiana are also under investigation by the Justice Department for prison conditions. Three years ago, Alabama was court ordered to fill more than 2,000 positions but the department has only managed to hire 300 people so far. The state has until October to fulfill the order.

Louisiana tried to raise salaries in the past, but it didn’t stop the revolving employment door. The turnover rate is about 73 percent for correctional officers and staff.

“This is a difficult job and it’s hard to support a family on what amounts to about $26,000 a year,” Louisiana DOC undersecretary Thomas Bickham said. 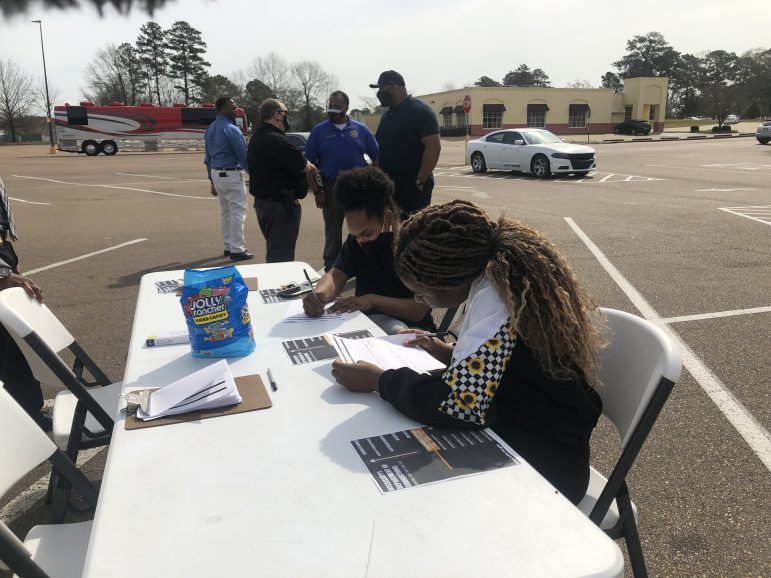 Kierra Jones and Roshuntianna Fairley fill out applications to be correctional officers in a parking lot in Pearl, Miss, March 13, 2021.

Beyond the danger and the low pay, there’s also an image problem. Films and TV shows portray correctional officers as guards with little training, who don’t care about inmates.

Dewey, who has been studying jails and prisons for 20 years, said staff inside prisons are often thought of as beneath every other form of law enforcement, despite having the most interaction with people who have been convicted.

But a lot of times, correctional officers get to know them better than counselors. Dewey would like to see more focus on those aspects of the job in recruitment campaigns.

“I think more emphasis on the huge transformative potential that correctional officers can have in the lives of people who are at their lowest point,” she said.

Correctional officers are in a unique position to be able to help rehabilitate inmates, provided they have the staffing and support to do so.

Tyron Hanks, who has been a drug and alcohol counselor for the Mississippi Department of Corrections for about a decade, has been helping with recruitment at the mobile hiring events. He’s never worked as a correctional officer, but being able to make a difference in someone’s life is a big part of what’s kept him in his profession.

“You get to see them go through the process of – those who really want to change their lives – of actually putting in the work to be rehabilitated,” Hanks said. So it’s rewarding and I wouldn’t trade it for anything.”

This story was produced by the Gulf States Newsroom, a collaboration between WBHM, Mississippi Public Broadcasting, WWNO in New Orleans and NPR.