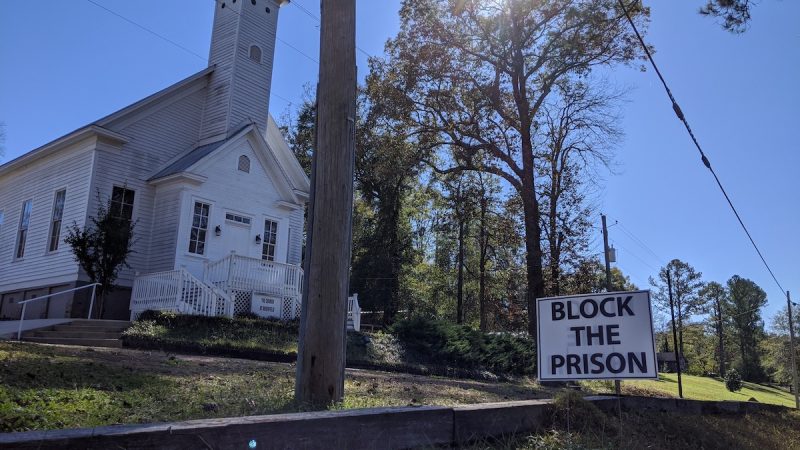 Throughout Brierfield, Ala. residents have posted signs opposing a proposed state prison.

When Alabama Gov. Kay Ivey signed leases for two new privately-owned prisons earlier this year, the decision sparked uproar with the public, activists and the legislature. While state leaders say the move aims to improve prison conditions, some worry it will only increase the incarceration rate in a state that ranks 13th nationally.

Louisiana ranks number one in the country for incarceration rates, and Mississippi comes in second. With the U.S. Department of Justice investigating all three states for the prison conditions and their release practices, each state is testing a different approach to address those issues.

In Alabama, 30-year lease agreements with CoreCivic would allow one of the nation’s largest private prison companies to own and maintain the two facilities while the state corrections department staffs them. Together they’ll hold 7,000 inmates. Ivey pushed the deal through without opening it up to public opinion or working with state lawmakers.

Parker moved into his retirement home, less than a mile from a proposed prison site in Tallassee, Ala. about four years ago.

“I was dismayed about the whole process because it affects my family directly,” he said. “It’s not like it’s going to be just a regular small little prison.”

The proposed mega-prison could nearly double the population of Tallassee, a town of about 4,700 people. Parker worries the new facility could overburden water and sewer systems in the area. He said some local officials have been promoting the prison as a chance for economic development.

“I think it’s going to be a boon to sell the water and sewage services to the prison, but I just don’t see it being a benefit overall for our community,” Parker said.

The other CoreCivic prison will be near Atmore in Escambia County. State officials are also negotiating a contract with a separate group of developers to build a third prison in Bibb County, where residents are pushing back against the plan.

A Region Under Investigation

Parker doesn’t want to see any new prisons built in Alabama, but he recognizes that something needs to change. The Justice Department lawsuit filed in December alleges violence, sexual abuse, as well as excessive force by prison staff in Alabama’s prisons for men.

“What the DOJ lawsuit and report found was that the Alabama Department of Corrections is unable to effectively run a prison without violating the rights of every single person who is in those prisons. And new facilities won’t change that,” said David Zell, cofounder of Alabama Students Against Prisons.

To address those concerns, he wants the state to hire more staff and increase wages.  Zell is worried if the plan to build the new prisons goes through, it will mean a chance for Alabama to fill empty beds and increase its rate of incarceration.

“This money is going to be redirected from the communities and people who need it most and toward a Band-Aid on a bullet wound that’s only going to defer the problem to my generation,” Zell said.

But Governor Kay Ivey has said the goal of building these prisons is to address all of those problems for the more than 24,000 inmates in the state. Her office estimates it would be more expensive to fix the state’s existing prisons than to build new ones.

“Not only will these modern facilities improve prison conditions and safety for both Alabama’s correctional staff and inmates, [but] they will also be designed to accommodate inmate rehabilitation,” she said in a press conference.

Ivey cautioned if Alabama doesn’t build new prisons, they could be forced to release a significant amount of inmates.

The deal that Ivey signed with CoreCivic would lease the two new facilities to the state, but it would never own them. That’s because there’s a state law that prevents Alabama from owning the new prisons, according to a fact sheet released by her office,

The state’s prisons are in poor condition largely due to deferred maintenance. Ivey hopes by outsourcing the preventative maintenance to CoreCivic, it will extend the life of the facility and maintain living conditions in the prisons.

A Different Approach Next Door

Officials in Mississippi and Louisiana are taking a different approach. Louisiana has let some people out of prison and is working toward sentencing reform. Burl Cain, the former warden of Louisiana’s Angola Prison, is Mississippi’s new Department of Corrections Commissioner.

“Our job is to correct deviant behavior, you know, not lock and feed torture and torment and to have less victims of violent crimes,” he told the Gulf States Newsroom.

Alesha Judkins, the Mississippi director for criminal justice reform with the advocacy group Forward U.S., believes the state is in an incarceration crisis. She wants to see more intervention before someone enters the criminal justice system.

“The way we sentence people, we have some of the harshest sentencing laws in the country. And so that’s driving up our imprisonment rate and our prison population,” she said.

All three states have a habitual offender or three strikes law, wherein a person convicted of a third crime can be harshly punished, regardless of the nature of the crime. That often means longer sentences for repeat offenders. According to the Louisiana ACLU, the majority of people serving a habitual offender sentence are there for nonviolent crimes.

Judkins said Mississippi is at a crossroads and if it doesn’t change those laws, it could end up in Alabama’s position – deciding whether to build new prisons or not. Mississippi also has aging prisons that are in need of serious repairs and updates. Parchman Prison is 120 years old and, like many of the state’s prisons, it is overcrowded.

“My opinion would be that instead of building prisons, that we enact policies, incentives and reforms that shrink the system,” she said. “You don’t need new prisons if you don’t have the people to put in them.”

Alabama’s governor maintains new buildings are key to solving many of the state’s prison problems. CoreCivic, the private prison company, is expected to sign leases on two of Alabama’s new prisons this summer.

Editor’s note: The original version of this story incorrectly noted the other CoreCivic prison will be in New Escambia County. It’s been corrected to reflect that it will be near Atmore in Escambia County.