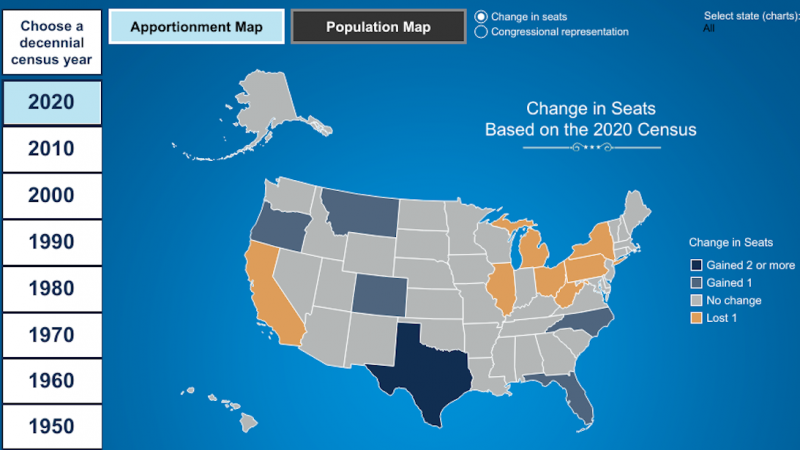 Alabama avoided the loss of a congressional seat as its population grew from 4.8 million in 2010 to 5.03 million last year, according to figures released Monday by the U.S. Census Bureau.

State officials had feared Alabama would lose one of its seven seats in the U.S. House of Representatives and one of its nine Electoral College members, based on the 2020 census.

The census is taken every 10 years, and the 435 seats in the House are apportioned according to the population of the states. The Public Affairs Research Council of Alabama released an analysis in January, predicting Alabama would keep its seven congressional seats and that New York would lose one seat.

That’s what will happen, based on the population count released Monday.

If New York had counted just 89 more people than the 20,215,751 final figure, it would have held on to the House seat, according to The New York Times. Instead, the size of New York’s delegation will drop by one to 26. Minnesota currently has one House member, and it will gain a second.

The distribution of the population nationally is important because census figures are used to distribute federal money among the states, as well as representation in the Electoral College. The Census Bureau said more than $675 billion in federal money is spent annually — based on population of the states — on schools, hospitals, roads, public works and other programs.

Gov. Kay Ivey said Alabama’s success in the census “was certainly a group effort across the state, and I offer my heartfelt thanks to everyone who played a part.”

Among key successes cited by Ivey in the 2020 responses were:

The release of data pertains only to statewide population totals. Figures for counties and cities will be released later.

The Alabama Department of Economic and Community Affairs took over the state’s Census count efforts in 2017 as the state geared up efforts to encourage people to participate in the census.

“This was by far the most time and resources that Alabama state government has ever given toward a census count, and I am happy that our efforts and hard work have paid off,” said Kenneth Boswell, chairman of Alabama Counts! Committee and ADECA director.

Alabama House Speaker Mac McCutcheon, R-Monrovia, has said he expects a special session of the Legislature this summer on legislative redistricting, based on the distribution of the population within Alabama.

The Alabama Legislature is made up of 35 seats in the Senate and 105 in the House of Representatives. Those districts are realigned every 10 years, based on population shifts reflected by the Census.