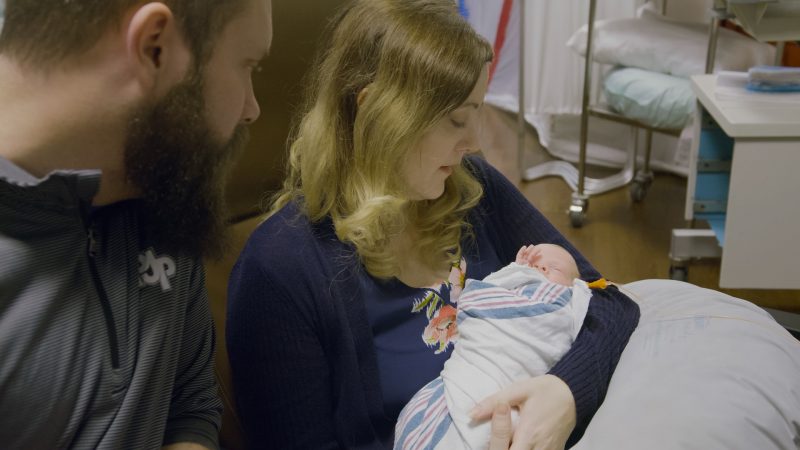 Jennifer Gobrecht and her husband hold their son Benjamin, born in 2019 after Gobrecht received a uterus transplant at the University of Pennsylvania.

Doctors estimate that worldwide, hundreds of thousands of women cannot get pregnant because they either do not have a uterus or they have one that does not function properly. For some, uterine transplantation provides an option to bear children.

UAB Hospital announced last week it would begin offering this procedure, making it the first program in the southeast and the only institution in the nation to offer uterus transplants outside of a clinical trial.

Surgeon Dr. Paige Porrett, who is leading UAB’s program, said uterine transplantation is fairly new. Doctors in Sweden conducted the first surgery in 2014 and initially Porrett was not convinced about the procedure.

“I was not a big fan of the idea or the concept of uterus transplantation when I was first introduced to it,” she said.

Unlike with a heart or kidney, a uterus transplant is not necessary to survive. But Porrett said the potential impact is significant.

“It was after I began to be introduced to the community that this transplant can serve that I began to change my mind,” she said.

Porrett said she was moved by people like Jennifer Gobrecht, who gave birth to her son Benjamin about a year ago.

“He’s got four teeth,” she said. “He’s almost crawling. He likes to roll a lot.”

Gobrecht was born without a uterus, a condition that affects about one in 4500 women. She said there are other options, like using a gestational carrier, but the process can be complicated and not always accessible.

Gobrecht participated in a clinical trial led by Porrett at the University of Pennsylvania, one of three uterine transplant research trials in the country.

She said she was excited to try the transplant, not only to become pregnant, but also to help pave the way for other women.

“The part that kind of attracted me was the medical advancement,” Gobrecht said. “There was a lot of research to this, which was part of my passion.”

Unlike other transplants, it is temporary. After a woman has given birth once or twice via cesarean section, the transplanted uterus is removed.

According to Porrett, there have been an estimated 80 uterine transplants worldwide, with more than 20 resulting in live births.

While some programs accept organ donations from live donors who offer to have their uterus removed, the program at UAB Hospital will only use deceased donors. Doctors hope to complete their first uterine transplant by summer of 2021.