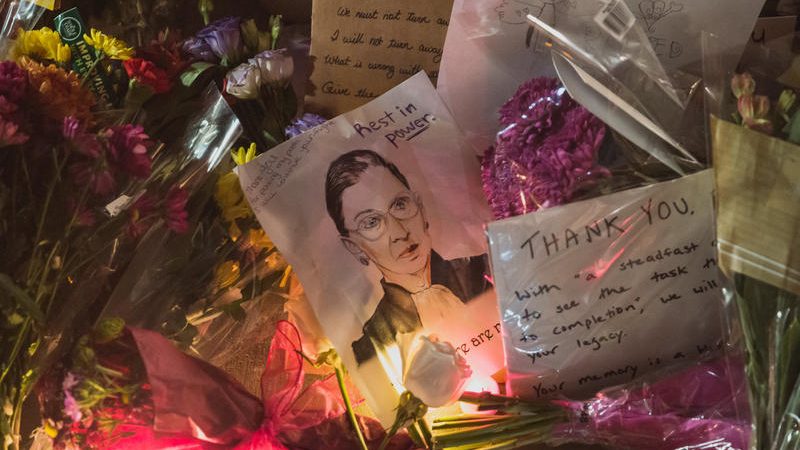 Offerings left for Ruth Bader Ginsburg during a vigil at the U.S. Supreme Court in Washington, D.C. on Sept. 19.

The news of Justice Ruth Bader Ginsburg’s death hit Michelle Erenberg as if it were a death in her own family.

“I felt like I lost my grandmother, in a way,” she said. “She was a hero and a role model. It took me about two minutes of sobbing before I could even tell my daughter what happened.”

Erenberg is the executive director of Lift Louisiana, a nonprofit that lobbies and litigates for reproductive rights and progressive state laws to help families.

For many abortion-rights activists like herself across the Deep South, Ginsburg’s death on Friday is both profoundly personal and profoundly consequential. She was a Liberal icon, a pioneer of gender equality, and a staunch defender of abortion rights.

President Donald Trump is promising a new Supreme Court nominee by the end of the week, and that replacement is almost certain to be hostile to abortion rights, giving conservatives and the anti-abortion movement a 6-3 majority.

The Ongoing Efforts To End Abortion In The South

Under that scenario, few regions in the country are more at risk of losing abortion access than the Deep South.

Mississippi, Alabama and Louisiana are all states where polls routinely show the majority of people consider themselves “pro-life” — states politically poised to ban abortion if Roe v. Wade were to be overturned — an increasing likelihood with a conservative Supreme Court majority.

“You’re talking about essentially the whole South goes dark as far as abortion care,” said Laurie Betram Roberts, the executive director of the Yellowhammer Fund. The fund helps people access abortion in Mississippi and Alabama. Across those states and Louisiana, roughly 14,000 abortions are performed every year.

Roberts said access to abortion services in the Deep South was already becoming difficult — even impossible — for some, especially those in rural communities, those who are poor, and people of color. In recent years, state legislatures have passed hundreds of anti-abortion laws and regulations. Abortion clinics have dwindled from dozens across the region to three in Louisiana, one in Mississippi and three in Alabama. If Louisiana had won its Supreme Court abortion case this summer — a case where Ginsburg’s vote was crucial — the state could have lost two or all three of its clinics.

And this November could restrict abortion rights further. In Louisiana, a ballot measure, if approved by voters, would ensure the state’s constitution could never be interpreted to include the right to an abortion. A similar constitutional amendment was passed by Alabama voters in 2018. Anti-abortion rights groups began pushing such amendments after a series of state supreme courts determined a right to abortion in state constitutions in recent years.

Steffani Bangel sees danger in the amendment regardless of the status of Roe v. Wade. Bangel is the executive director of the New Orleans Abortion Fund, which helps people across Lousiana cover the costs of their abortion.

She’s part of a network of groups fighting the amendment. They’ve recently put up “vote no” billboards across the state — a move that Bangel said was meant to counteract the frequency of anti-abortion billboards along highways across the region.

“If this amendment passes, it keeps us from ever being able to pass proactive legislation to expand the rights to abortion in our state. I see that as the most insidious and threatening piece of the amendment,” she said.

A Chance Nearly 50 Years In The Making

And Ginsburg’s death has only raised the stakes.

“Certainly her passing could alter the landscape of the Supreme Court’s jurisprudence on abortion, and really make this constitutional amendment that much more timely right now,” said Ben Clapper, the executive director of Louisiana Right to Life, which authored the amendment.

Reported to be at the top of Trump’s list is Amy Coney Barrett, an anti-abortion, Catholic judge whom Trump appointed to the Seventh Circuit Court of Appeals in 2017, and who grew up in the greater New Orleans area. Barrett’s religious connections have been scrutinized, especially her links to a small group called People of Praise, but leading anti-abortion groups including Americans United for Life and the Susan B. Anthony List have offered resounding endorsements for her potential nomination following Ginsburg’s death.

“If President Trump were to nominate her, we would certainly be excited,” Clapper said.

He praised Ginsburg’s legacy of fighting for gender equality, but he viewed her death as an unforeseen chance to obtain a goal nearly 50 years in the making.

“We see that as a critical moment in our nation when we have the opportunity to possibly restore the rights of unborn Americans,” Clapper said.

In the event Roe v. Wade were overturned, abortion would become a matter of state law. Both Louisana and Mississippi have trigger laws that would make abortion illegal if Roe v. Wade fell, and Alabama has an abortion ban still on the books from before that 1973 Supreme Court decision, which would take effect. Other states in the South and Midwest have similar provisions, or would be likely to ban abortion with few or no exceptions.

But Roberts, with the Yellowhammer Fund, said she believes people have more nuanced views than their state politicians. She noted that Mississippi’s 2011 personhood constitutional amendment, which would have declared human life begins at fertilization, failed, with 58 percent voting “no” and 41 percent voting “yes.” (Alabama’s passed with 59 percent of the vote.)

Some people might agree with exceptions for rape or incest victims, or if the baby was too sick to survive birth, she said. They might have helped a friend get an abortion. Maybe they want to know that if they ever needed one, it would be possible.

Many people in the South, she believes, aren’t truly ready for a post-Roe America.

There are the implications on fertility treatments when life is viewed to begin at fertilization — an issue that came up in Alabama’s near-total abortion ban, passed in 2019 and which has not taken effect. Some abortion opponents, including a Trump appointee to the federal bench, equate surrogacy and IVF treatments with abortion. There are implications for miscarriage treatments when abortion is banned. A hospital might refuse to induce labor because of anti-abortion rules, despite possible health risks to the person miscarrying (a Catholic hospital was accused of this by several women 2016).

Roberts worries about a rise in illegal abortion if the procedure were banned.

“If you believe in access in any form,” she said, “it’s time for people to come out of the shadows.”