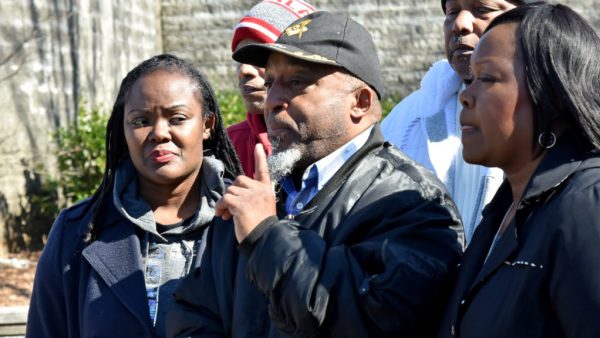 Kenneth Glassgow is flanked by Rodreshia Russaw, left, and Sheila Tyson during a drive to help jail prisoners apply to vote by absentee ballot.

Valentine’s Day took on new meaning Friday as members of five organizations continued their tour to get persons in jail and prison registered to vote by absentee ballot in the upcoming primary and beyond.

“What we did (Friday) – and have been doing – is registering eligible voters inside of our jails and our prisons,” said Rodreshia Russaw, co-executive director of The Ordinary People Society. “We have made history in 2020 where it’s actually on the absentee ballot (application) that they can register inside of prison.

“Showing love to these folks is the greatest thing we can ever put out,” she continued. “Not only in Jefferson County but all over the state of Alabama and Southern states. They are not forgotten. Everybody counts. On Valentine’s Day, we will make a mark and continue to exercise their right to vote.”

This year, the application for absentee ballots in Alabama added incarceration as an explanation for needing to vote by absentee ballot, meaning prisoners who have not yet been to trial or those convicted of lesser offenses can still vote

Kenneth Glasgow served 14 years in Alabama and Florida on a charge of drug possession. After his release in 2001, he realized he couldn’t vote. His right to vote was restored in 2004.

Contacted by BirminghamWatch, Jefferson County Circuit Clerk Jacqueline Anderson Smith said each application for an absentee ballot has to be sent separately.

“It has to be one per each envelope we receive,” Smith said. “That is to request the ballot. Then we mail the ballot back to them, based on the information they provided on the application. We also would know what precinct they would be voting in. That’s why we need their address. While they may be in jail, what we want on that application is where they originally voted when they were not in jail.”

TOPS and the other organizations are stepping in to provide postage to return ballots to the circuit clerk’s office.

“The organizations pulled together and we will furnish the stamps,” said Jefferson County Commissioner Sheila Tyson, a member of the Black Women’s Roundtable. “It’s being funded by all of the organizations that are standing here – Black Women’s Roundtable, TOPS, National Action Network, NAACP (and) Voices of the Violated Reproductive Justice Project. We all came together and we gave money on the postage.”

Group members said Glasgow’s court victory made Alabama the first state in the nation to provide a reason on the application stating, “I am currently in prison or jail and have not been convicted of a felony involving moral turpitude.”

Crimes of moral turpitude include but are not limited to murder, manslaughter, assault, kidnapping, rape, sodomy sexual torture and abuse and enticing a child to enter a vehicle for immoral purposes.

Russaw said news that some inmates could, indeed, vote was well received by those behind bars, adding that nearly 3,000 applications for absentee ballots have been collected.

“People are ecstatic that the law has been changed,” she said. “We’re informing and educating them but more importantly, this now shows true progress to them, that we actually care about them. We’re not just talking about them but we care about them.

“Policies are changing around currently and formerly incarcerated people,” she continued. “It gives them their full citizenship. We’ve had folks in here that have registered to vote for the first time in history today, on Valentine’s Day.”