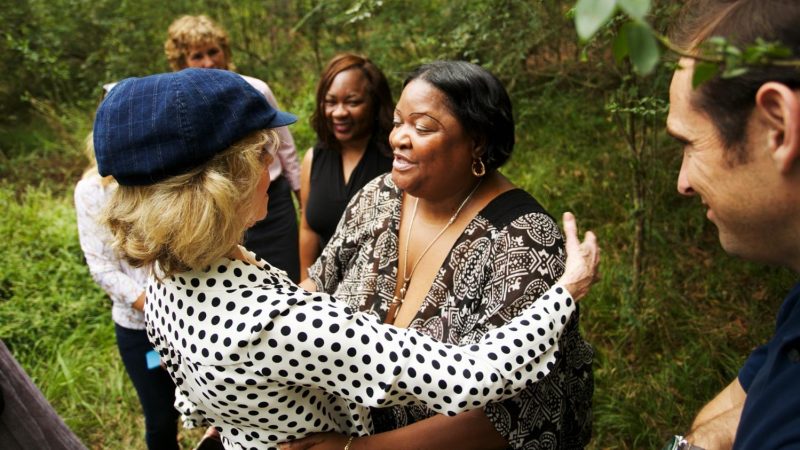 Among the high-profile politicians and celebrities who met with Pamela Sue Rush in her dilapidated trailer in Lowndes County, Alabama, to learn about poverty in the United States was actress and human rights activist Jane Fonda, pictured here embracing Rush during an October 2019 visit. Co-author Catherine Coleman Flowers stands to the right of Rush, an activist with the New Poor People's Campaign who died in July after contracting COVID-19.

Pamela Sue Rush, a resident of Lowndes County, died July 3 from complications related to COVID-19. Rush, 49, was a mother to a 12-year-old daughter and 18-year-old son. She also was a well-known activist who fought against injustice in poverty-stricken areas.

Before she became ill, Rush spent the last two years of her life fighting for the poverty-stricken and those affected by systemic racism. She personally had been the victim of a predatory lender who charged her “almost 4 times the value” for her Lowndes County mobile home, which was dilapidated and surrounded by sewage drainage.

Because of various health issues, Rush was unable to work and brought in a monthly income barely reaching $1,000. As a result, Rush was unable to make necessary changes to her home that others take for granted. In a video titled “Trapped,” published by the Bernie Sanders campaign, Rush shows viewers her home and the surrounding sewage swamp.

“My mama also lived in the mobile home, too. In the winter time it gets too cold and my mama caught pneumonia being in the trailer and she died from it,” Rush’s voice narrates while she arranges blankets on the floor to keep the cold from entering under her door.

In an interview with Southerly magazine, Rush explained how she had “straight-piped her family’s waste into her yard for the past two decades.” Unable to afford an on-site septic tank, Rush said this was her only option. She and her two children also suffered respiratory issues related to the mold growing inside their home from the intense moisture.

Determined not to let her circumstances weigh her down, she chose to use her voice to help the countless others affected by systemic racism. Rush became one of the faces for the Poor People’s Campaign and appeared on several news outlets to share her story. In June 2018, Rush, accompanied by the Rev. Dr. William Barber of the Poor People’s Campaign, testified before members of the U.S. House and Senate, including Sen. Elizabeth Warren, and told her story through tears.

“I live in a mobile home with my two kids,” Rush told the lawmakers. “They charged me over $114,000 on a mobile home that’s falling apart. And I’ve got all these animals coming in my house. I’ve trapped about four opossums in my house. Cats and stuff. And I got raw sewage.” Catching her breath, Rush said, “I don’t have no money. I’m poor.”

That same year, Rush was introduced to environmental activist Catherine Flowers and told Flowers she wanted to tell her story. The two worked closely together to speak out against the prejudices that affect the lives of black individuals. In an article on Facing South, Flowers touched on how deep an effect Rush had on her work. “She shared her story and showed me her reality. It will forever influence my work and commitment to ending poverty,” Flowers said.

In late June, Rush was hospitalized in Selma with a diagnosis of COVID-19. Flowers said there were multiple systemic factors that contributed to Rush’s death.

“This virus, like a heat-seeking missile, zeroed in on Pam. The intersections of poverty, environmental injustice, climate change and racial and health disparities placed multiple targets on her back,” Flowers said.

When she wasn’t fighting for those inflicted with injustices, Rush was first and foremost a mother who loved her children. Those who knew her expressed an admiration for her strength, honesty and strong moral code.

She Made a Mark on the World

Rush’s death also brought forth a wave of appreciation expressed by several organizations grateful for her advocacy efforts.

On its Facebook page, the National Council for Science and Faith expressed condolences to Rush’s family, saying, “She fought for justice while she lived through injustice.” The Rev. Barber told the Montgomery Advertiser he counted Rush as a sister.

The Poor People’s Campaign honored Rush on its Twitter page with a video of her testimony to Congress. “It is w/heavy hearts that we share news of the passing of one of our beloved #PoorPeoplesCampaign family members. Pamela Rush, from the (campaign), spent a lifetime fighting to end the impacts of systemic racism and poverty,” the tweet said.

Flowers said she would forever remember Rush’s passion for fighting injustices. “Pamela Sue Rush was the Fannie Hamer of our time. She was able to shine the light on poverty in America in a way that made it hard for us to ignore,” Flowers said.

Rush expressed in her interview with Southerly how she could not allow the shame she felt about her circumstances stop her from doing what was right. “I’m real ashamed about it, but I had to come out of my shame,” she said. “God gave me strength.”