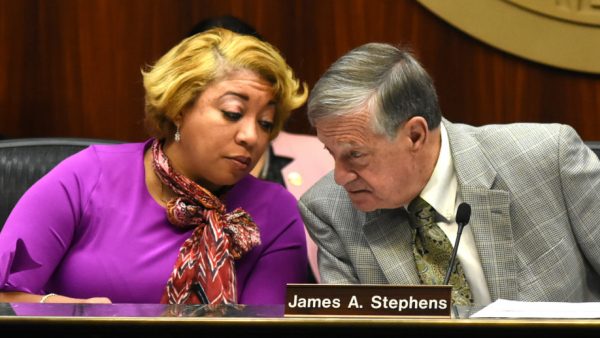 John Henry twice said his goodbyes on Thursday – first at his final meeting of the Jefferson County Commission and then at a farewell event in his honor later in the afternoon.

But the final wave goodbye for the county’s chief financial officer will likely be his input in a tabled matter concerning the proposal to add a 1% convenience fee of no less than $1.95 to over-the-counter business conducted by credit or debit card with Jefferson County.

Henry suggested that commissioners table the matter for two weeks so he and Revenue Director Travis Hulsey can find an answer to a revenue department budget shortfall because of the increasing use of credit and debit cards.

“We definitely understand the concerns in reference to the hit to constituents,” the outgoing CFO said. “Let us table this and come back to the commission with a recommendation in reference to a more appropriate fee. If we can’t get there, let us look at some alternatives to ensure that the revenue department doesn’t have a budget shortfall.”

When reminded of his pending new job as chief financial officer of the American Public Transportation Association in Washington, D.C., Henry said he’ll still be on the job in Jefferson County when the commission next assembles Jan. 21.

While credit card service charges are 2.35% of transactions, the revenue department negotiated a lower rate of 1.75%. Hulsey said the department collects about $65 million annually in ad valorem taxes on motor vehicles.

“The only alternative for me as a department head to stay within our budget is to recommend a convenience fee so we can stay within our budget,” Hulsey said, “or else ask the county commission to come up with additional funding for that service or we just stop taking credit cards effective April 1st because we’re out of budget money for it.”

Commission President Jimmie Stephens repeated his concern for taxpayers, citing some who use a credit card on the last day of the month when they’ll be paid on the third or fourth day of the next month.

“I just feel that puts an undue tax burden on our taxpayers who are coming in with a credit card because they don’t have cash or a check to do business in Jefferson County,” he said. “I would favor, if indeed we implement a credit card fee, I would like to see a maximum on it (the fee) and probably with some provisions to not allow corporations to use them (the maximum).”

Commissioner Lashunda Scales noted that Hulsey had negotiated his resolution for months.

“I certainly wouldn’t want the public to think this had not been vetted,” she said.

Commissioner Sheila Tyson said taxpayers who are underemployed will be hit hardest by the convenience fee.

“Five dollars is a lot of money for some people,” she said.

The proposed 1% convenience fee was an effort to share the burden with the taxpayers, Commissioner Joe Knight said, noting that any shortfall would thus come from the general fund.