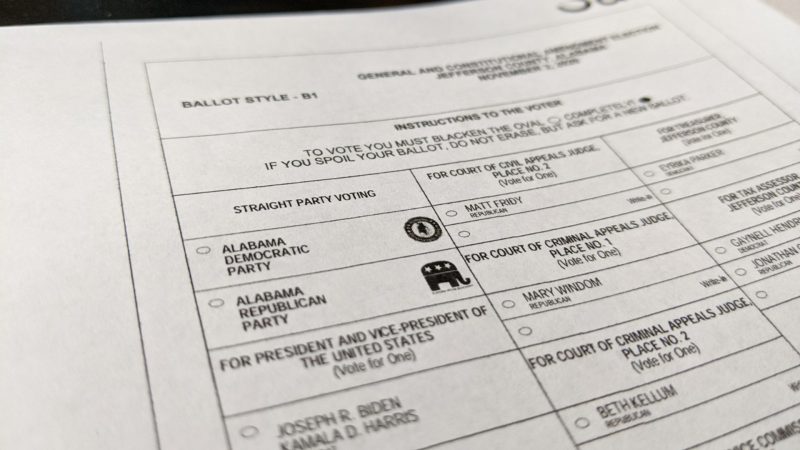 Election ballots can be complicated. The multi-paged documents can include national, state and local races with a lot of circles to fill in. For some people, voting for all the candidates from one party, a straight ticket vote, simplifies the process. Alabama is one of six states that still allows the practice, and state officials say it is increasingly popular among residents as politics become more divided along party lines.

“I like the straight ticket voting myself,” said 59-year old voter Wintrey Pride. “It’s easier for me.”

She and her husband Ronald Pride, 62, have both already cast mail-in ballots for this year’s election. The Birmingham couple voted straight ticket Democrat.

Ronald Pride said filling in one circle is quicker and easier than filling out the entire ballot, especially since he only votes for candidates in one party.

“I’m Democrat, so I’m not voting for any Republicans,” he said.

In the 2018 general election, nearly two-thirds of Alabama voters selected the straight ticket option at the top of the ballot. That was a record high, according to Alabama Secretary of State John Merrill. He said it’s a popular option for both Republican and Democratic voters and he expects to see another increase in November.

“We’ll see probably the highest number of straight ticket votes that we’ve ever seen in the history of the state this year,” Merrill said.

He said voter turnout will likely be higher than in previous years and the political atmosphere is  more partisan these days.

“They (voters) would rather vote for the person that they don’t know, that’s from their party, then they would consider a candidate from another party that may be of equal value or equal ability,” Merrill said.

The polarization of voters is part of a nationwide trend, according to University of Alabama political scientist Regina Wagner.

“The tendency of people to not cross party lines when they’re voting has increased across the board,” Wagner said.

In a recent survey by Pew Research, only four percent of registered voters said they would support Trump or Biden and a U.S. Senate candidate from the opposing party.

Wagner said the straight ticket option makes it more convenient to vote this way. But she said it also means people might blindly cast a vote for someone they otherwise wouldn’t support.

Where it remains, Wagner said it can affect the outcome of some election results.

“You know the ability to check that box, to vote straight ticket, has more implications for lower-level offices, than it does for the high profile ones,” Wagner said.

She said the races at the top of the ballot for President and statewide offices like a U.S. Senate seat include familiar names, so there probably wouldn’t be much difference. But Wagner said people are less likely to know candidates further down the ballot. If straight ticket voting isn’t an option, voters might just leave those races blank, which could have an effect on results.

Voter Kristin Hannon doesn’t cast a vote for a specific race if the candidates’ names are unfamiliar. The 32-year old is planning to vote in the November election but said she’s never opted to vote straight ticket.

“I usually just pick who I think is most credible for the job, doesn’t really matter if they’re Democratic or Republic or independent, for me,” Hannon said. “That’s how I’ve voted in the past. That’s how I’ll vote now.”

In general, Alabama ballots are counted even if a voter does not vote in every race. Residents who choose the straight ticket option also have the ability to override their party choice in individual races.

In recent years, there have been some calls to end straight ticket voting in Alabama, but no party has pushed for any formal effort to end the practice.