Accounting Contract Leads To Squabble On The Jefferson County Commission 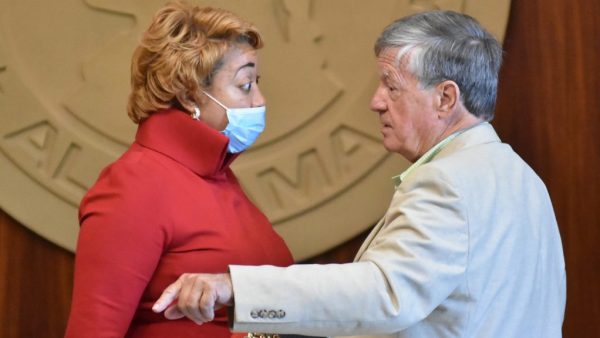 A contentious meeting of the Jefferson County Commission led to verbal sparring in the commission chamber after the meeting ended.

Commission President Jimmie Stephens and President Pro Tem Lashunda Scales lingered on the dais Wednesday as most who had been in the session exited. Stephens said he felt he was being disrespected as Scales discussed a proposed extension of the county’s contract with an accounting firm to perform annual audits.

At one point, Stephens said Scales implied that he was being racist in performing his duties as a commissioner.

“I’m going to administer government in this county like it’s colorblind,” Stephens said as he left the chamber.

A resolution seeking a three-year extension of the county’s contract with Warren, Averett, Kimbrough, and Marino, LLC was pulled from the consent agenda for separate consideration. Commissioner Sheila Tyson repeated the concern she expressed during Tuesday’s committee meeting that Warren Averett lacked the diversity that the county should display as it seeks to escape the cloud of a decades-old consent decree for past hiring practices.

Warren Averett has created a financial statement and performed a single audit each year since it was hired in April 2008.

Banks, Finley, White & Company has provided the audit of federal grants for the county since the end of fiscal year 2013. Before fiscal year end 2007, the state Examiners of Public Accounts performed the financial statement and single audits for Jefferson County.

Commission discussion included the assertion that an agreement had been struck to hire the minority firm of Banks Finley White & Company. Scales took offense at the notion that John Henry, the former county chief financial officer, had made a deal to give Banks, Finley, White the bigger contract as auditor.

“If (Warren Averett) had this contract for at least almost 10 years, Mr. President,” Scales said to Stephens, “then why would a minority firm not be given the opportunity to now, at least, especially if they have the capacity to do the same contract?”

Angela Dixon, who was recently promoted to CFO to succeed Henry, recommended that the county extend its contract with Warren Averett to maintain stability in the difficult period of the pandemic. She said the three-year extension came from Warren Averett.

“This is the standard contract they provided,” Dixon said.

Finance committee Chairman Joe Knight said he was unaware of the alleged deal.

“As finance chair, I didn’t know what was going on,” he said. “Don’t put me in this position where I’m part of something. I didn’t talk about a 1-year deal or a 3-year deal. It sounds like some sinister activity.

At one point, Banks Finley White was referred to as a “new company.” Tyson took issue with that, saying, “They’re not a new firm. Not that I’m an advocate (for them). I’m for what’s right.”

Scales offered a substitute motion that the auditing contract with Warren Averett be extended one year, subject to evaluation at budget time. That motion passed unanimously.

The resolution concerning the county’s contract with Advanced Disposal for residential garbage and trash collection was accidentally placed on the agenda after commissioners agreed to hold that matter over for two weeks. It was removed from consideration.