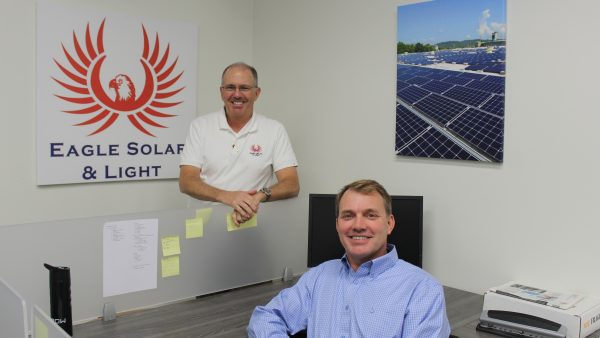 From their home office in Birmingham, Eagle Solar & Light owner Sam Yates and sales director Paul Freeman say there is a lot of opportunity for growth in Alabama's solar industry.

Birmingham’s Eagle Solar and Light is one of a handful of solar installation companies in Alabama. About 90% of their customers are commercial clients, such as banks or manufacturers. But Paul Freeman, Eagle Solar’s sales director, says they occasionally get calls from residents who are thinking about installing solar panels.

“Most folks that call us are very interested in reducing their power bill,” Freeman says. “Once they find out that the Alabama Power company has this reservation fee that ends up consuming about 40 to 50% of their savings per month, it makes it a difficult choice for them.”

Freeman says homeowners often choose not to go with solar.

This reservation fee, which some refer to as a solar tax, applies to residents who install solar systems and remain connected to Alabama Power’s grid. Alabama Power started charging it a few years ago at $5 a month per kilowatt nameplate capacity. For the average homeowner who might install a 5-kilowatt system, that means a $25 monthly charge on top of the regular fees that all customers pay the utility provider.

Alabama Power officials say the fee covers the cost of maintaining backup electricity that solar users need on a rainy day. But environmental advocates are not buying it.

“We contend that there’s no need for a backup charge, that the charge as it is, is unjust, unreasonable and against the public interest,” says Keith Johnston, attorney with the Southern Environmental Law Center.

Johnston and others want the Alabama Public Service Commission (PSC), the agency that regulates state utilities, to eliminate the fee. Environmental groups filed a complaint with the commission in 2018. But Alabama Power officials say the charge is fair, and they’ve proposed an increase from $5 per kilowatt capacity to $5.42.

Sean Gallagher, vice president of state affairs for SEIA, the national solar trade association, says most states do not impose this kind of fee.

“That’s pretty regressive and it’s in fact not common,” Gallagher says. “Because regulators in almost every state where this kind of proposal has come up has rejected it.”

According to Gallagher, a growing number of states encourage solar investment with tax breaks and other incentives, but not Alabama.

“Alabama stands near the bottom of installations in the US on a state-by-state basis,” he says.

Sam Yates, owner of Eagle Solar and Light, says Alabama is missing out on an opportunity to grow statewide solar investment. In addition to Alabama, his company installs systems in Georgia and North Carolina, states that both rank nationally in the top 10 for solar installations.

The PSC will hold a public hearing Thursday to hear testimony from those who both support and oppose Alabama Power’s solar backup fee. Officials say the commission will consider the arguments and issue a decision at a later date.