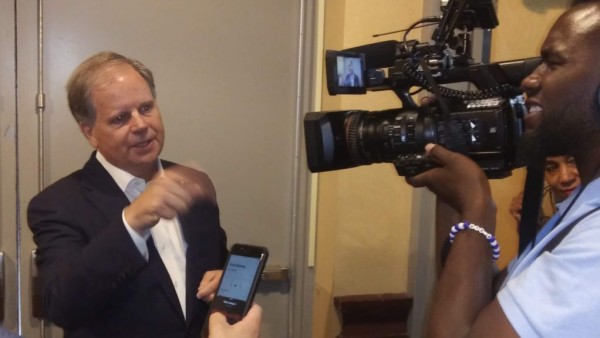 Sen. Doug Jones mentioned early in his remarks before an audience of students from Miles College that when he went to Washington, D.C., after winning a special election to the U.S. Senate, he didn’t realize that he was going to be a part of a government that functioned according to what someone says on Twitter — an oblique reference to President Donald Trump’s penchant for tweets that make the nation’s capital go topsy-turvy.

Then he opened the floor for questions, which were submitted via Twitter using the hashtag #DougMeetsMiles.

Students could therefore be forgiven for working on their smart phones during Jones’ appearance Thursday at Pearson Hall on the campus of the historically black college in Fairfield. It was one of several town hall meetings he held at universities and colleges across the state during the Senate’s recess.

Jones faced a friendly crowd, who asked him mostly about issues that are part of the Democratic Party agenda. Restoration of voting rights for felons, abortion rights, ways of combating the recent wave of mass shootings and help for those with heavy debt loads from student loans were among the topics the students posed to Alabama’s junior senator.

“Let’s not talk about gun control, because when you say ‘gun control,’ people run off into their corners,” Jones said. “Let’s talk about gun violence. We have 40,000 people a year who die from gun violence … and 24,000 of them are from suicides.” Jones has long referred to himself as a “Second Amendment guy,” touting his love of hunting and target shooting, and he reiterated that stand in the forum.

Jones also criticized the Alabama Legislature’s passage of strict laws controlling abortion, calling the laws “a big mistake” and “the product of a gerrymandered legislature.” He also cautioned listeners against calling those who support abortion rights “pro-abortion.”

“Nobody’s for abortion. I get so tired of people who say we’re pro-abortion. I wish there was a way in this world where women didn’t have to make such choices … . We need to get out of those corners and talk to each other, agree to disagree about certain things, and respect each other for our disagreements,” he said. “It’s ironic that we (in Alabama) can pass such a restrictive law when we lead the nation in infant mortality.”

One of the questions submitted through Twitter asked whether Alabama could raise more money for education by legalizing and taxing marijuana, as some states have done. Jones didn’t address the funding issue directly, but said he believed that marijuana should be removed from the federal government’s schedule of controlled substances so that more research could be done into possible beneficial uses.

“But a state that won’t even pass a damn lottery is going to have a hard time (passing) that,” he added.

As for next year’s presidential election and how Democrats would help defeat Trump, Jones joked, “I think President Trump is helping the Democrats as much as he can.” He added that he thinks his party’s candidates “are fighting with each other, and that’s to be expected in a primary. There’s some good proposals out there, but there’s some I don’t agree with.”

Jones is in the early stages of his own re-election campaign, as he seeks a full term in the Senate. He has no Democratic primary opponents yet, while Republicans will select from a slate that includes U.S. Rep. Bradley Byrne, Alabama Secretary of State John Merrill and former Auburn head football coach Tommy Tuberville. Former Alabama Chief Justice Roy Moore, who narrowly lost the special election to Jones in 2017, is also a possible candidate for the GOP primary on March 3.